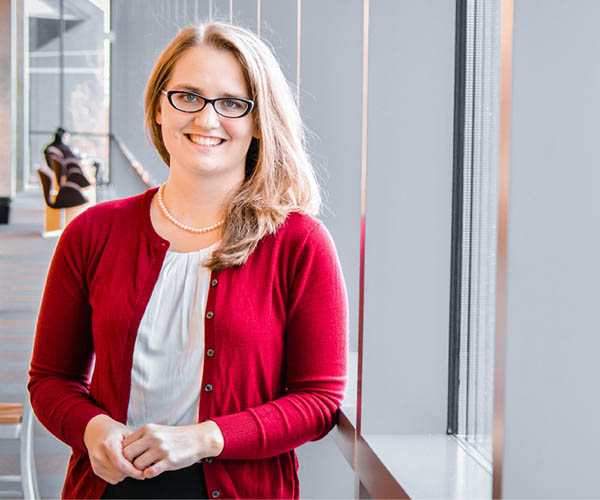 "I'm a big nerd—I can't help myself!" laughs Sarah Klemsz. She's a whiz with computer code, and she likes to base decisions on hard data. But it was the relationship aspect of supply chain management—observed during a summer internship at Boeing—that lured her into the field. "I liked that the buyer group was the interface between the shop and engineering," she says. "It's all about coordinating with people to optimize."

Welcome to the 21st century

After graduating from the University of Portland, Klemsz joined Boeing as a supply chain analyst, responsible for relationships with 15 suppliers and about 1,100 parts, all used to make controls that pilots use to fly commercial aircraft. Before long, she had also created an extra role for herself: modernizing how Boeing's Portland supply chain group generates reports.

Before Klemsz came along, reporting was largely a manual process. Team members hunted down data they needed in Boeing's ERP system and other sources; then they rekeyed the information into a spreadsheet or database program. That didn't make sense to Klemsz. "It's the 21st century. We've 3D-printed a car, we've landed a probe on a comet, and we're paying people to type?" So she started writing code to automate those reports.

Her efforts made a dramatic impact. For example, an automated tool now runs a components shortage report every morning. It updates managers with real-time information, while saving the supply chain analyst team one hour every day, which they devote to more mission-critical work. "The tool saved $526,000 in labor costs and was recognized by the Portland site as the largest cost saving project in 2013," says nominator Derek Westfall.

To keep the ball rolling, Klemsz pulled several tech-savvy colleagues into a new Supply Chain Information and Technology (SCIT) team. "We started getting together to bounce around ideas, and share the code we had already developed, so information would flow seamlessly among our homegrown systems," she says.

Pleasures of the job

"I love the Aha! moments in my work, when everything falls into place," Klemsz says. She's especially fascinated by risk management—how a business turns uncertainty into a course of action. Come port strike, blizzard, or tsunami, the supply chain stands ready. "We know what will happen, and we've got the plan," she says.

A hiker and kayaker, Klemsz also volunteers as a Girl Scout leader. She's especially proud of the two high school students she has been supporting in their work toward the Gold Award, the Girl Scout's highest rank. "I started with the students when they were in middle school," she says. "It's rewarding to be along for their journey."

Yes. Each time we streamline a process, it makes the work easier, and saves the company money.

Absolutely! Businesses are putting more emphasis on their supply chains. It is an exciting time to join the field.