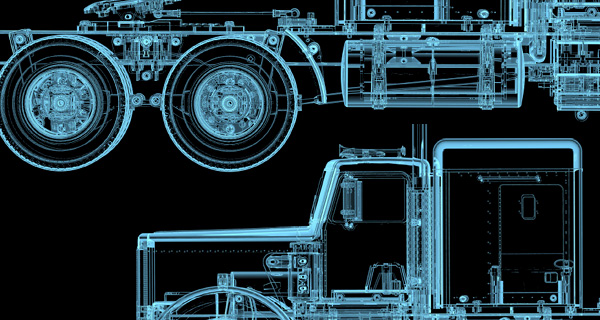 The past few years have been rife with speculation about a perfect storm circling the U.S. supply chain—the convergence of rising freight volume and falling capacity. The U.S. economy served as the backdrop for prognostications. As long as conditions remained sluggish, and forecasts uncertain, slack demand would continue to obscure the severity of a looming driver shortage.

That storm has now seemingly subsided—and concerns that have been swirling about are becoming manifest. The trucking industry is front and center in this new climate as the first and final link in the global supply chain. All indications suggest U.S. industry has made a rebound, and point to a brighter forecast.

Many trucking companies see evidence of this economic improvement, according to 75 percent of carriers responding to Inbound Logistics' 2014 Trucking Perspectives market insight report. In 2013, 40 percent indicated as much. More telling, only one-quarter of haulers project static growth—and not one trucking company forecasts the economy getting worse. The supply demand pendulum has swung to the carrier's side—which places more pressure on shippers to find capacity and reduce costs.

While economic dynamics have become more clear, other considerations remain less so. Regulatory oversight is a concern for carriers and shippers, who believe it reduces productivity and adds costs. The changing face of retail and e-commerce similarly brings new challenges—especially as the last mile race heats up.

Today's transportation market is all about the haves (carriers) and have-nots (shippers). When the economy began to ebb in 2008, industry downsized. Shippers operating private fleets turned to dedicated contract partnerships; trucking companies streamlined their fleets, some to the point of adopting an asset-light moniker. Capacity shrank as smaller carriers went bankrupt, and other truckers jettisoned older engine units in favor of fewer, newer, greener options. Now industry is starting to build back up.

The greater concern for shippers and carriers is driver availability. The current generation is nearing retirement, creating an obvious dearth of new talent. This remains the greatest constraint on the market—and it is reflected in IL's research. In 2014, trucking companies report on average 2,867 drivers (owner-operators included), compared to 2,871 in 2013; 3,024 in 2012; and 2,507 in 2011.

It stands to reason that driver-related costs—such as recruitment, retention, and training—are the greatest challenge truckers face. Nearly 90 percent of respondents this year indicate that's the case, up four percent from 2013 (see Figure 1). 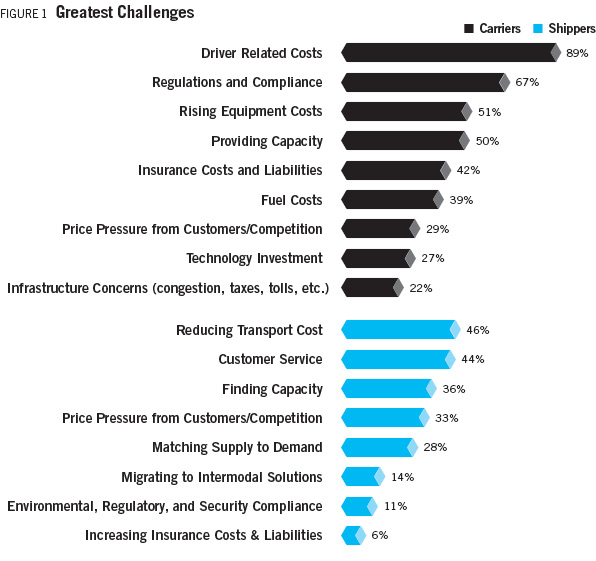 As with most concerns in the trucking industry, keeping costs in check is paramount. Regulations and compliance remain a secondary priority for carriers, according to 67 percent of respondents, followed by rising equipment costs (51 percent), providing capacity (50 percent), insurance costs and liabilities (42 percent), and fuel costs (39 percent).

Transportation procurement has always been a commodity business. But given market contraction, shippers have less leverage haggling over price. They are making decisions based on service, availability, and reliability—all of which now come at a cost.

Reducing transport costs (46 percent) remains the top challenge for shippers—but it has competition. In 2013, 75 percent of respondents cited costs. In 2014, customer service (44 percent) and finding capacity (36 percent) follow closely in order of priority.

Shippers now face capacity constraints for certain types of equipment and in competitive lanes. In 2013, 50 percent of surveyed shippers experienced a shortage of capacity; this year, that number grew to 78 percent (see Figure 2). Accordingly, 89 percent have also experienced a rate hike beyond fuel surcharges. What a difference one year makes.

One interesting trend worth noting is how shipper priorities have wavered in recent years. In 2014, 72 percent of respondents cite reliability as the most important consideration when selecting a trucking partner (see Figure 3), followed by price (61 percent), customer service (56 percent), then capacity (50 percent). In 2013, price trumped reliability and service. That sentiment is unlikely to return any time soon as market balance reverses course. 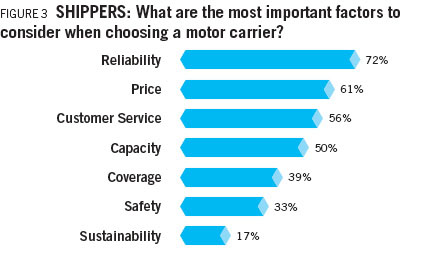 Shippers have held sway the past several years, playing the spot market and rate shopping between lanes and among carriers. Today's new normal, however, favors trucking companies. A different sense is emerging as shippers now compete for carrier attention. Those who showed faith to partners during lean times will likely be rewarded.

As shippers become resigned to rising freight rates, they are pressing for more value. Ironically, much of the investment trucking companies made during the past few years to court shippers in a competitive market are now paying dividends for all parties involved.

Carriers have developed valued-added logistics capabilities that go well beyond the transactional freight buy. Some have morphed into asset-based third-party logistics service providers. For example, 73 percent of polled trucking companies provide logistics capabilities. Trucking companies similarly play a growing role in helping shippers tap rail intermodal opportunities (47 percent), whether it's door-to-door domestic, or drayage to and from ports. It's arguably the only option in today's market where shippers can find capacity while reducing costs.

Another area that has picked up steam is dedicated contract carriage (DCC)—offered by 58 percent of truckers. Since the recession, private fleet conversions have fed a growing DCC business, where carriers assume all the liabilities of owning, maintaining, and fleeting assets.

One of the most difficult challenges for shippers and trucking companies is controlling that which can't be controlled—government bureaucracy. When the Federal Motor Carrier Safety Administration's (FMCSA) Hours-of-Service (HOS) program went into effect in 2013, a great deal of unrest rippled through the industry. Apart from the complexity of explaining new restart rules, and training drivers to be compliant, there was an expected productivity drop—somewhere between three to five percent, according to some insiders. Many argued that FMCSA did not complete the required field studies before implementation.

One thing is clear: HOS has disrupted trucking operations—90 percent of respondents acknowledge the regulations have had some impact, with 29 percent identifying it as a "marked impact" (see Figure 4). 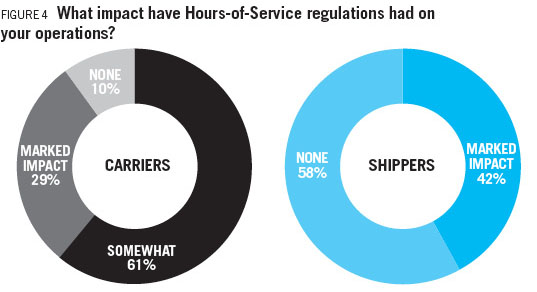 On the shipper side, reactions are more muted—likely because trucking partners have absorbed much of the impact. The majority of shipper respondents (58 percent) have felt no impact at all from the HOS rules.

An added component to the HOS update is the provision for new in-cab technology requirements. Truck drivers eventually will have to install electronic logging devices (ELDs) that would automatically collect performance data. While most carriers have embraced the new mandate, some—notably owner-operators—have criticized the initiative for its intrusiveness. FMCSA has since extended the comment period for ELD implementation, and a final deadline remains in limbo.

Still, many trucking companies have already gotten on board with the ELD requirements, recognizing the advantages of automating manual driver logs and maintaining a record of driver data. Eighty percent of surveyed companies have voluntarily upgraded their in-cab technologies to be compliant with the new mandate.

As carriers become more selective about the customers they choose to do business with, shippers that go the extra mile to help their partners manage some of these challenges—facilitating loading and unloading, for example—will gain preference.

FMCSA's Compliance, Safety, Accountability (CSA) driver scorecarding system, which had also come under some early criticism, has been largely accepted within the industry. Shippers and carriers recognize that safety ultimately trumps driver availability.

Elsewhere on the regulatory docket, infrastructure tops the list of legislative measures that have the greatest impact on business, according to 54 percent of trucking companies. Healthcare reform (52 percent), energy policy (38 percent), the Highway Trust Fund (26 percent), and vehicle weights (19 percent) follow accordingly (see Figure 5). Concerns about infrastructure, the Highway Trust Fund, and energy policy are all entwined, and have been a rising platform within the transportation industry for some time. Interestingly, 13 percent of respondents included write-in votes for HOS and CSA, suggesting the impact of FMCSA rulemaking still resonates. 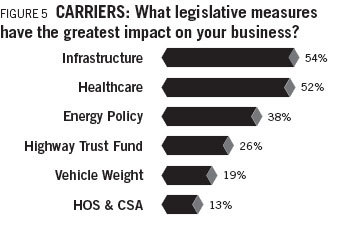 While trucking companies have gained an edge in today's market, the freight brokerage industry continues to grow apace. When the 2012 Surface Transportation Bill increased freight agent surety bond requirements from $10,000 to $75,000—an effort meant to weed out nefarious agents—it created a boom-and-bust market. Many smaller brokerages went out of business. On the other end of the spectrum, larger players such as XPO Logistics, Coyote Logistics, BlueGrace Logistics, and Echo Global Logistics have been aggressive on the mergers and acquisitions front. Further consolidation will only feed that frenzy.

As shippers feel squeezed, they are looking to tap space wherever possible. Carriers have always turned to brokers to help eliminate deadheads and build more continuous moves. Some trucking companies and brokers are even helping shippers identify backhaul opportunities in their own private and dedicated fleets, then sharing in the revenues. The more visibility shippers, carriers, and intermediaries have to assets and shipments, the more effectively they can match trucks to demand. Where capacity is scarce, this level of collaboration will be paramount—not only for shippers, but for industry as a whole.

A great deal of untapped capacity exists, especially within smaller, regional networks. One recent trend is the emergence of courier management companies—online aggregators that provide nationwide access to regional and local couriers. As e-commerce volumes grow, and as retailers decentralize distribution networks to get closer to demand, this untapped and underutilized capacity could become a popular alternative for last-mile deliveries.

Still, given the capacity constraints that exist in today's marketplace, most shippers know who really carries the load in a pinch. Fifty-six percent of surveyed shippers say they value carrier partners more than brokers (see Figure 6)—compared to 52 percent last year, and 38 percent in 2012. That shipper appreciation for trucking companies has been growing is not surprising. By comparison, only six percent prefer brokers exclusively (18 percent in 2013); and 38 percent hold both brokers and carriers in similar esteem (30 percent). 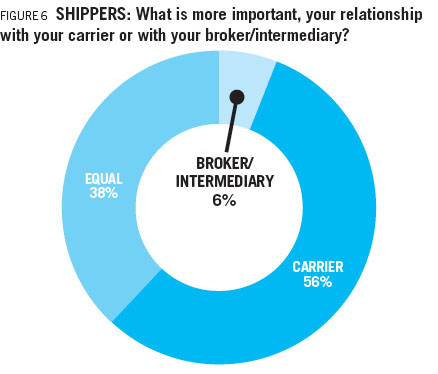 Shippers have always valued the spot market as a means to not only absorb spikes in demand, but also to keep trucking companies honest. The tension between carriers and brokers creates a more competitive environment. But as spot market demand remains seasonally high and rates increase, shippers will no longer have the luxury of discretion. It will become compulsory as they juggle options to fill their space quotas. It's a sustained role reversal not seen in a while.

Inbound Logistics' annual Top 100 Truckers directory brings Trucking Perspectives full circle with an in-depth directory of carriers that match the diverse needs of the shipping community. IL editors pared this year's roster from a pool of 200-plus companies, evaluating surveys, conducting online research, and talking with truckers and shippers alike. This guide serves as a benchmark for the types of services transportation buyers value when looking for new partners or evaluating current ones.

The Top 100 list offers a snapshot of the trucking segment, including large TL and LTL carriers with global inroads, and niche-specific regional haulers that get their white gloves dirty delivering to the final mile.

Second, Inbound Logistics reached out to more than 100 unique over-the-road freight shippers to comment on industry trends, regulatory challenges, and their partnerships with carriers.