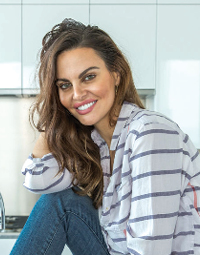 Ashley Tyrner is founder and CEO of Farmbox Direct, which works with hundreds of farms to deliver fresh, natural, and organic produce to its 10,000-plus members.

After I had my daughter, I was working 16- to 18-hour days in the New York fashion industry and found it difficult to find fresh fruits and vegetables. You could have a can of Coca-Cola delivered to you at 2 a.m., but you couldn't get organic produce.

I didn't have a logistics background when I started Farmbox Direct and I definitely didn't have any idea what I was in for. But we have been able to pioneer shipping fresh produce to the customer's door.

Shipping living, breathing produce is a logistical nightmare. For instance, we had to figure out how to mitigate ethylene (the gas given off by ripening fruit) in a way that was food-safe. We had to determine how to get the shipping box to maintain its temperature. We had to identify a food-safe way to eliminate moisture in the box. Even something as simple as an orange sitting next to strawberries can make or break a box during transit.

Initially, Farmbox Direct delivered only in New York City and Brooklyn. Then we expanded and shipped up and down the Eastern Seaboard, which was one day of transit.

Next, we configured the box to work for two days of transit. Then, we knew if we could get the box to last for three days of transit, we could have one warehouse in the Midwest, which we located in Kansas, and blanket the entire continental United States from there.

We tried more than 100 prototypes of the shipping box and it's nothing short of a miracle that we figured out how to do it. You can't just throw all the produce in a box because it won't make it during transit. Our box is completely proprietary, down to where we put the onion, the grapefruit, and the orange.

We try to source locally first, but we're also trying to eradicate a much bigger problem: the approximately 24 million Americans who live in urban or rural food deserts.

People in food deserts don't have access to fresh fruits and vegetables. Maybe they don't have a grocery store near them, or they can't afford a vehicle to get to the store. Instead, they shop for food at a fast food chain, bodega, or convenience store.

In these food deserts, diet-related illnesses are rampant. Diabetes and cardiovascular disease can be eradicated if people get access to the right food.

1. What's it like to take a business from start-up to national presence in five years?

I've learned that anything that comes across my desk is something no one else can handle. There's no road map that teaches you to be a CEO, or how to grow a business to a national company. We grew so quickly that it was rough sometimes, but we're in a good spot now.

2. If you had $1 million to start a new business or philanthropic venture, what would you do?

I'd put it toward my newest endeavor, Harlow's Harvest, started with my daughter. We ship cooking kits built around STEM and nutrition with recipes and games for kids ages 4 to 15. The kits bring advocacy and education to healthy eating.

Don't get married so young, travel more, and think before hitting send. I used to be more short-fused when I started the company because there were so many problems to deal with. Now, I'm more seasoned. I know that at the end of the day, the world is still going to spin.

Related Articles
The Logistics of Franchising: Delivering the BasicsTurn to Technology to Attract the Next Generation of WorkersTransparency to Efficiency: How IoT Can Increase the Productivity of Your Transportation (Sponsored)5 Hacks for Recruiting in Supply Chain ManagementCarrier Network Plants Seeds of Delivery EfficiencyExtending the Life Sciences and Pharmaceutical Supply ChainWalmart’s ShippingPass Has Ended. What Retailers Should Do Next.The Whole Industry Is Struggling to Define TMS. Here's My Take.Supply Chain in the Cloud: How Tech Is Reshaping LogisticsTrends—February 2017 More related articles...