Automation That’s Worth the Weight 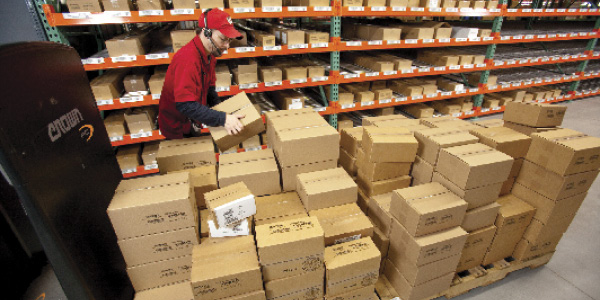 When dietary supplement company Nature's Way wanted to trim down excess distribution space, it embarked on a design and technology regime. Get the skinny here.

Consolidating 280,000 square feet of existing finished goods distribution space into a 100,000-square-foot facility sounds like it would defy the laws of nature. But not for Nature's Way, a manufacturer and distributor of high-quality dietary supplements, headquartered in Green Bay, Wis. By partnering with a third-party automation expert, Nature's Way trimmed down, and its new facility now runs at peak performance.

The new facility had to support handling 2,000 SKUs, both ambient temperature and refrigerated, with an existing throughput of 33 million bottles of product annually. The DC also needed to distribute products to customers in 50 states, and overseas through five supply chain channels.

Nature's Way sent out an RFP soliciting a third-party company to develop the distribution facility's new design. It selected Woodridge, Ill.-based The Numina Group, to analyze the facility, design the materials handling automation, and handle overall project management of the various subsystems, contractors, installation, and testing.

Numina Group's initial data review pointed toward a smaller, automated DC to reduce overall footprint requirements. But midway through the design process, Nature's Way located a 100,000-square-foot building in Green Bay. It then asked Numina to shift gears and develop a design for this new site—in essence, consolidate 280,000 square feet of existing finished goods distribution space into a 100,000-square-foot facility.

"One of the biggest challenges we faced with the Green Bay distribution center was resizing the operation midstream," recalls Mark Hejmej, sales engineer, The Numina Group. "So we went to work, and engineered a space-efficient automated design that utilized the entire cube of the 100,000 square feet. We looked at all of Nature's Way's existing processes, conducted analytical studies based on combined order volumes projected out five years, and made recommendations.

"We then developed a multi-level pick module design, combined with the right picking technology, to match Nature's Way's order shipment profile and deliver the ROI the executive team required," he adds.

"The plan for the new Green Bay facility was to consider technology to reduce touches, travel, and headcount by more than 50 percent," explains Krajewski. "When the automated DC was completed in December 2009, we reduced picker labor by 50 percent, and increased productivity to 222 lines per hour (LPH), up from the 110 LPH combined rate at the former Springville and Green Bay DCs."

Pick, Pack, and Ship Slims Down

In 2012, three years into running the new Green Bay DC, Nature's Way distribution executives conducted a logistics analysis, and found that a second distribution center in Nevada could provide significant logistics savings and an improved delivery window. By locating product closer to its large West Coast customer base, the company could get orders to them faster, and reduce shipping costs.

"We saw an opportunity to significantly reduce logistics expenses by moving some distribution to the western part of the country due to continuous business grow in this area, especially in California, Arizona, and Nevada," says Krajewski. "Based on historical data and growth factors, we determined that DC would need a footprint of roughly 50,000 square feet. We ultimately secured a 70,000-square-foot facility in McCarran, Nev."

Once again, Nature's Way brought in The Numina Group to evaluate facility design for the West Coast DC. After Numina completed its facility analysis, and because of the Green Bay DC's success, the two companies agreed to design the new distribution center's pick, pack, and ship processes to mirror the Green Bay DC, but on a smaller scale.

Like its counterpart in Green Bay, this new DC, which launched in October 2013, is based on the following lean automated pick, pack, and ship order fulfillment processes:

RDS contains modules for pick, pack, and ship automation. As a true Tier-1 WCS, it includes voice-directed picking for all pick processes, conveyor and sorting control, packing, and automatic print-and-apply labeling—fully integrating the control and execution of the order fulfillment processes and material handling control.

The conveyors used throughout the DC are equipped with 24VDC motor-driven rollers for the materials handling and order-transport automated conveyor system. The controls are managed by the RDS internal control language called Trak, a multi-function, event-based control engine that performs real-time control, fully integrated with data-driven order fulfillment rules. Real-time control is executed in a real-time task at 250 microsecond execution speeds.

"RDS provides labor management, and order tracking and reporting tools that other WCS do not provide," explains Krajewski. "We have found this useful to capture important key performance indicators (KPIs). It also provides visibility to order workloads, and zones with the highest picking volume, so we can rebalance worker activities and not become overburdened during the course of the day.

"In wave planning, we always like to have an even order flow, but sometimes that does not happen," he explains. "RDS provides that visual on browser-based screens at any PC on our network so we can check work zones to monitor order processing."

Zone-routing supports voice-directed picking. The McCarran facility utilizes voice-directed picking to drive the order fulfillment split-case pick using a two-level pick module with a pick-to-carton order picking process. The voice technology manages the start of the order within the initial pick zone, and integrates voice commands and responses with hands-free bar-code scanning to manage the pick-and-pack validation direct to the shipping carton. Auto-bottom boxes were selected for use to eliminate operators having to spend time taping the bottom of boxes when starting an order in the pick module.

Prior to order release, SAP determines optimum carton sizes and quantity based on each SKU's cube, and number of SKUs to an order. SAP wave releases orders based on shipment priority, destination, customer, and other factors to increase efficiency and eliminate human decision-making. Zone routing conveyor logic is integrated with the picking process to manage the movement of cartons to the required pick zones.

The order data and SKU item details sent to RDS are further used to manage and balance the wave order release, and distribute work more evenly across pick zones. By starting the order at the initial pick, work is more easily distributed across pick zones to balance picking labor and improve productivity. The fully integrated RDS Pick Execution order fulfillment module provides picking, and efficient order movement and accuracy across the entire operation.

In each zone, voice directs the operator to get the correct box size, and affix a pre-printed license plate bar code to the lower lefthand corner of the box. The operator uses a wireless hands-free scanner to scan the bar code, and is voice-directed to the first pick location.

"Once initial operators complete and verify the picks in their given zone, voice directs them to place the carton onto the conveyor, and it is automatically routed to a next pick zone, or zones, based on the order SKU pick requirements," says Hejmej. "Zone routing enables a more efficient pick environment because the carton only stops at pick locations required to complete the order without the need for operator decisions."

"We wanted the leanest method to minimize touches in our picking processes," says Krajewski. "The voice-directed, pick-to-carton process and zone-routing conveyor enabled us to achieve this, making split-case picking efficient and accurate."

The RDS voice system eliminates the complexity of RF or paper-based picking for pre-printing pick sheets, labels, or RF screens to read, or key-in picking instructions or quantities. Operators pick with both hands and eyes focused on the work task. They simply listen for the specific work sequence, scan, pick, and use voice commands to verify the quantity, and validate each transaction.

One key advantage compared to traditional voice technologies is that the McCarran DC's picking process is a speaker-independent, zero-voice-training technology. It requires no operator voice training regardless of accents or languages. Operators are productive in 10 minutes or less after training.

Automated and synchronized pack-out processes. After a carton goes through picking, it is conveyed through the pack line, the bar code is scanned, and an alphanumeric message display directs the operator to the carton-pack task requirements. The necessary pack sheet documentation is automatically printed and inserted.

Once packing is complete, the carton is fed through an in-line taper, and conveys to the in-line scale. The weight is captured to verify picking, and if the carton is over or under the expected weight tolerance, it is diverted to be inspected and corrected. If the carton passes the weight audit, it travels to the automated print-and-apply label applicator, where the UPS, FedEx, or LTL label is printed, affixed, and verified to the top of each carton. The ready-to-ship cartons then convey to the shipping area.

"RDS controls and manages the automated pack and ship area, and allows a single pack line to process 5,000 cartons in an eight-hour shift," adds Hejmej.

Pack lines include automatic in-line document printing, void fill, and tapers to allow a single operator to pack seven or more cartons per minute. Once packed, cartons convey to in-line scan, weigh, and print-and-apply labeling for automatically manifesting UPS and FedEx shipments. They are then conveyed and sorted to a trailer with a powered extendable conveyor to allow fluid loading direct to the trailers. If a split-case shipment is part of an LTL order, the carton is labeled and diverts to an LTL order staging area. The operator picking the full-case LTL shipment requirements is voice-directed to the staging area. Using voice and the hand scanner, the operator marries the carton or cartons required for the LTL shipment to the pallet.

The DC has exceeded the shipping cost efficiencies needed, and provided the tools to meet the company's same-day ship policy for retailers in the West.

"No matter where our customers are in the country, regardless of order size, all orders placed by 5 p.m. are shipped same day, and customers receive orders in one or two days," explains Krajewski. "Without the streamlined, automated pick, pack, and ship solution at our DCs, we would not be able to sustain this level of delivery speed.

"Throughout the buildout of the Green Bay and McCarran DCs, The Numina Group was a large driver of the systems we have in place," he adds. "It delivered the full package—a turnkey solution."