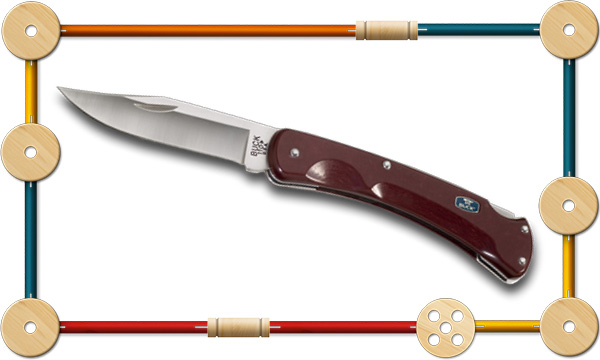 Buck Knives' lean integration has allowed the company to sharpen efficiencies in its manufacturing operation, increase output, and pull back production from China.

Walk into Buck Knives' Post Falls, Idaho, manufacturing facility, and you immediately sense that it is not a typical corporate headquarters. The timber-framed entrance, cathedral-ceiling lobby, and interior walls decorated with mounted animals and rustic ephemera evoke a hunting lodge atmosphere.

The renowned knife manufacturer moved its only plant to Post Falls from San Diego in 2005 after a near-disastrous product line failure and soaring utility costs forced the company to rethink its business trajectory. A change in scenery to Idaho's verdant northern panhandle, which has favorable labor, utility, and regulatory allowances, proved an appropriate fit for the lifestyle to which Buck caters. That Idaho was once home to the family business served as added incentive.

Location aside, a more telling corporate transformation was already in the works. Along with honing a variety of pocket, folding, and fixed-blade knives, and other outdoor accessories, the manufacturer was integrating lean principles across the entire enterprise.

By any standard, Buck's manufacturing process is labor-heavy and automation-light. Its prized products are celebrated not only for their "forever warranties," but also their detailed workmanship.

The century-old company cut its teeth under the leadership of founder Hoyt H. Buck, who made his mark producing handmade knives during World War II. Today the manufacturer is governed by his grandson, Chuck Buck, and the next in line, CEO CJ Buck. Like its leadership legacy, the company's clientele is measured in generations, rather than years.

When the company faced cost pressures during the early 2000s, it followed the offshore manufacturing trend to reduce labor costs and remain relevant within the marketplace. Big-box retail customers such as Walmart and Cabelas were squeezing margins and demanding the same from their suppliers. Competition from other legacy knife brands such as Gerber, Kershaw, and Case was relentless.

The company's move to Post Falls contributed to more outsourcing as the new plant got up to speed training employees and managing internal administrative changes.

Buck's move to offshore production didn't go unnoticed. Loyal customers that had relied on American-made Buck products for generations weren't sold on buying imports. So the company made a U-turn in 2003 and began executing a plan to pull back its supply chain from China.

"Our old approach to manufacturing was focused on labor and fixed costs," says Phil Duckett, COO. "Most decisions to manufacture in China are based on those factors."

On the domestic front, Buck was batch-producing knives to reduce costs. But work-in-process inventory at various stages in the manufacturing process was building up. Production-to-demand was off the mark, materials were wasted, and excess stock had to be liquidated at year's end.

"The only thing forecasts guarantee is that they are wrong," says Duckett. "When you miss targets, you sit on inventory."

A Model for Success

Buck rolled out its lean transformation while still in San Diego, bringing in consultants and sending out employees for training. The first step was transforming its mass production blueprint to an assembly cell model that facilitated flow.

The shop floor displays clear signs of Buck's lean integration. If signs like "Quality is Never an Accident" aren't a tell, the cell manufacturing layout surely is. The various stages of knife production are grouped together in an orderly flow. (See sidebar below.)

The logic behind Buck's cell layout is obvious at first glance, as the flow of materials feeds the manufacturing process. Various whiteboards around the facility share numbers and targets to benchmark performance.

But Buck is still a lean anomaly for a number of reasons. The company, by design, is known for craftsmanship. Its manufacturing process is driven by skilled labor rather than automation, which pointedly contradicts lean concepts of standardization.

Other variables are outlined in a 2008 Lean Enterprise Institute report:

These obstacles aside, Buck does place a premium on quality and defect elimination, two principles of lean. Batch production competed with the latter, while creating unnecessary waste and cost.

With lean principles now in place, Buck has consolidated space and increased output by creating a logical workflow through the entire manufacturing process.

On Oct. 29, 2010, Buck set a record when it produced its one-millionth knife for the year—with months to spare. Now that mark is a provisional milestone, and a new benchmark.

The Long and Short of Lean

At its outsourcing height, Buck was splitting production evenly between Idaho and China. As of 2011, it is split 85 percent to 15 percent—and that ratio is expected to diverge even further as the company continues on its lean manufacturing path.

But Duckett is quick to clarify one point. "We're not a lean manufacturer," he says. "We're a lean enterprise."

From accounting practices that focus on value streams and workflows to working with customers to level order fulfillment, Buck has embraced the totality of lean. Much of the credit for this shift goes to Chuck Buck and the executives who bought into the idea, recognized its potential, and set in motion an aggressive plan to educate and train themselves and their employees.

As with any lean organization, a central tenet is continuous improvement. In concert with its Post Falls relocation and lean integration, Buck has also upgraded its technology architecture. After installing the Microsoft Dynamics AX enterprise resource planning (ERP) system in 2005, and upgrading it in 2010, the manufacturer partnered with Colorado Springs-based Accellos to integrate its One Pinpoint EDI for AX in 2011.

The Accellos solution brings uniformity to what had been a patchy EDI framework, while realizing the true potential of its ERP. In addition to simplifying data exchange with customers, the company is saving 30 percent on operational costs related to EDI.

But the offshore market for Buck products is growing. China, for example, has become a big consumer as its middle class expands. International currently accounts for about 10 percent of Buck's sales, and that number is likely to grow.

When Buck revolutionized the knife industry in 1964 by introducing the Model 110 Folding Hunter "lockblade," it placed the company on the cutting edge of craftsmanship and innovation.

Now, nearly a half century later, Buck Knives enjoys a similar position as a lean practitioner.

Buck Knives' Lean Workflow Gets to the Point

Fabrication begins when fine blank machines process lower-grade steel with specifically shaped dies at a rate of 1,000 units per hour. Buck sources raw metal from AK Steel in Ohio, and imports sanding steel from Sweden. A laser machine is used for higher-grade material, and scraps are melted down and recycled off-site.

Amid a potent chemical smell, double disc grinders then work blades to proper thickness, followed by stamp machines that add notches and other features. Every knife is imprinted with "Made in the USA," the Buck brand, model number, and a unique year code.

In the heat treatment room, ovens slowly bake blades at 2,200 degrees F for 45 minutes. Then freezers chill product at -110 degrees F, before the blades go back to the ovens for another round of heat. The entire process takes 13 hours.

After further grinding to perfect thickness, blades take a welcome bath, swimming with soap, water, and stones. The rough tumbling process polishes knives before they move through more fine-grinding, where a row of big, green machines continue shaping, sharpening, and serrating different types of blades.

The final production stages assemble blades with handles made from paperboard cut-outs or other materials, such as wood and bone. Knives are hand-edged with Buck's trademarked Edge2x technology, which pairs computerized testing and skilled training to ensure edge integrity.

Units are next hand-sharpened and tested in assembly-line fashion, then encased in clamshell packaging for distribution to retailers.