With 3,700 restaurants in all 50 states and 29 countries, the company decided to begin the upgrade by improving inbound logistics capabilities at its 10 domestic U.S. distribution facilities, which it calls quality control centers (QCCs).

Under the existing process, about 95 percent of the company's freight was vendor managed. QCCs placed orders with vendors, who then selected carriers to deliver the goods, shipping the freight prepaid.

The arrangement was rife with disadvantages. Each QCC ordering goods as needed sometimes resulted in excess inventory, which not only necessitated off-site storage—an added expense—but also cost money when perishable goods had to be written off because they had expired.

The decentralized operation also introduced inconsistencies into the network. Some QCCs operated more comfortably with inventory in stock and were willing to bear the added expense of off-site storage. Others didn't want the expense or didn't have access to affordable off-site storage.

In addition, the arrangement limited PJ Foodservice's carrier visibility. And because 80 percent of the company's shipments are temperature-controlled, the lack of visibility also affected quality control efforts.

The company then began managing its own inventory. "We've taken on the majority of existing vendors," says Hartman. "Our inbound team is also heavily involved in introducing new vendors and origin locations."

The results of these efforts have been impressive. "We exceeded our goals, both in inventory turns and reducing off-site storage spend and product write-offs," he adds.

Once inventory management was under control, PJ Foodservice turned its attention to improving inbound transportation.

When vendors were managing its freight moves, PJ Foodservice had to go to them with routing questions or carrier issues. "Now, we can often communicate directly with carriers, which gives us visibility via their transportation management systems," says Hartman. "We know going into a weekend, for instance, which loads need to be monitored."

"We control truckload (TL) shipments through a seal process, even when there are multiple pick-up and delivery stops," Hartman says. "LTL shipments, however, create more risk because there's less chain of custody visibility. By building more TL shipments, we can get product to QCCs quicker."

Other gains for PJ Foodservice came in the form of carrier relations. By moving from freight prepaid to freight collect terms, and taking control of routing, PJ Foodservice was able to schedule deliveries by appointment. Carriers receive a tender that includes most charges.

"Carriers know up front what they will be paid for, including fuel surcharges and number of stops and deliveries," Hartman notes. "The only additional expenses are accessorials, such as delay penalties, which we reduce by requiring carriers to notify us before delay begins either at a shipper or at one of our consignees."

PJ Foodservice also incorporated multiple carriers on a given lane. "This strategy helps ensure service," says Hartman. "It's unreasonable to expect that a carrier will always be able to commit to a load."

Through the inbound transportation improvements, PJ Foodservice reduced freight spend by 10 to 15 percent while improving inbound service and reducing over, short, and damage claims.

To complement the carrier control and visibility gains of its inbound operation, the company set out to increase its private/contract outbound fleet's efficiency. The order visibility and inventory control that help identify inbound goods and rerouting or crossdocking opportunities delivers benefits throughout the entire network.

The outbound improvements have already made an impact. "The organization has worked closely with our restaurant team to balance the need for multiple days of coverage with overall cost controls, and develop the most service-oriented and cost-effective solution," says Hartman.

The changes have also given the company a competitive edge. "Restaurants often run into inventory issues," Hartman says. "For example, a recent local convention caused a store in our Kentucky service area to run through product quicker than it normally would have, resulting in depleted inventory. We were able to tell the store exactly when replenishment inventory would arrive. The store borrowed enough product from a neighboring restaurant to get through the few hours until the delivery arrived."

This isn't an isolated incident. Even planned events can present a challenge for restaurants, and the winner is often the company with the best supply chain planning and execution.

"In February 2011, right before the Super Bowl, other transportation companies and foodservice distributors couldn't deliver into some markets due to bad weather," Hartman recalls. "Not only were we able to serve regular customers, but consumers also turned to us because other restaurant chains were unable to open because product didn't get to them."

In the competitive pizza business, every day is the Super Bowl. For Papa John's, having a strong supply chain helps ensure victory. 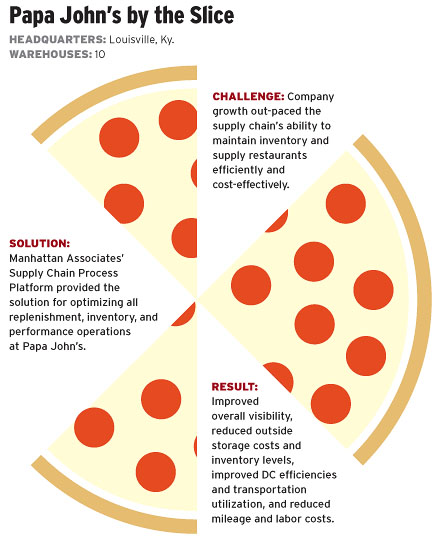 Related Articles
The Whole Industry Is Struggling to Define TMS. Here's My Take.Communication is Key When Optimizing Logistics NetworksHow to Get More From Your TMSSteering Transportation Management Strategies3PL Partnership Provides The Total PackageFirst Aid for the Hospital Supply ChainTrends—July 2014Forecasting Seasonal Surges Keeps Products on the ShelfLooking for One Logistics Partner That Does Everything with Excellence?Unleashing Logistics Excellence
More related articles...