Germany is the most important European future market for U.S. brands expanding their e-commerce business (see chart), according to Internationalizing Your Brand in 2017, a study of e-commerce retail decision makers commissioned by Arvato and conducted by the Worldwide Business Research Digital agency.

Companies that focus consistently on omnichannel and offering convenient, flexible, and reliable service are at an advantage. But Europe poses challenges that do not exist in the United States. The European continent consists of about 50 countries—each with their own languages, legal requirements, and shopping and payment preferences.

Because there is no language barrier, it is not surprising that 96 percent of companies surveyed use the UK as a springboard into Europe; 85 percent even have retail shops there.

In the top continental European markets of Germany, France, and Italy, more than three quarters of the U.S. brands surveyed are represented by their own web shops or on marketplaces; retail shops are considerably rarer.

Czech Republic, Portugal, and Turkey had the lowest rankings. But even in those countries, more than 60 percent of the U.S. companies surveyed are represented in online retail.

Which countries do you plan to expand into?

Approximately one-third of leading U.S. e-commerce retailers are planning to enter the German market in the next four years. The Benelux countries, France, and Italy are also top targets for 23 percent of those surveyed by Arvato. 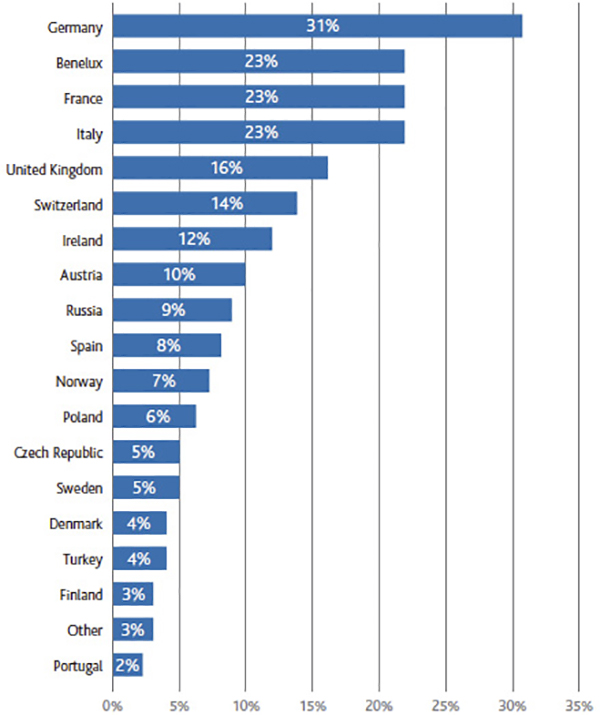