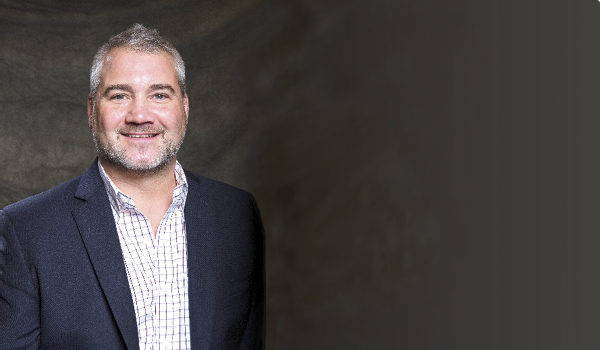 After more than 14 years in the trucking industry—at USF Group and Central Freight Lines—Dan Clark decided it was time for a change, both for himself and for the shipping community.

Trucking companies were depending on legacy information systems, often inherited through corporate acquisitions, that couldn't share data efficiently. Shippers increasingly relied on third-party logistics companies to manage their relationships with carriers. And those shippers, Clark says, lacked real-time access to information about their loads, especially the costs.

Spotting an opportunity, in 2008 Clark founded Kuebix, which provides cloud-based transportation management systems for both small and mid-sized businesses and larger enterprises. "Our company's mission is to bring the power back to the shipper," he says.

On top of the potential he saw in his idea, Clark's longtime passion for coding didn't hurt the new venture. "Not many truckers know how to write software," he says.

Clark recently gave Inbound Logistics a look at how he has developed as a leader.

IL: Give us a story from earlier in your career that illustrates the type of leader you are.

I was assigned to run a trucking terminal in Newark, New Jersey, that was in chaos. There was so much freight that you could walk the dock without hitting the ground. It was a big barn, with about 500 Teamsters and 22 supervisors. Everyone worked seven days a week, but it was supposed to be a five-day operation.

IL: What were the hardest aspects of launching Kuebix?

Our biggest challenge was that the technology Kuebix was developing leveraged fast-moving market trends—including mobile, software-as-a-service (SaaS), and integration with APIs. The logistics sector was slow to embrace those trends. Companies were ready for change but had not adopted the technology that would allow them to make that leap. The first few years were an uphill battle, where we spent more time consulting and educating logistics professionals on what needed to happen. It wasn't until about 2013 that the industry's acceptance of technology reached a point where Kuebix could attain its full potential.

IL: What kinds of growing pains has the company experienced since then?

We knew what shippers and carriers needed, so we started down a particular path. But because technology changes so fast, we have to be able to change our business model based on what's happening in the marketplace.

In 2008, social media was just beginning. Today, everything has to be mobile-compatible. New developments—machine learning, artificial intelligence, predictive analytics—never end, and we always have to stay ahead of the curve. We have to ask, "Are we meeting today's trends?" and, "Is this business in a position where it can be easily scalable? If it's not, what do we have to do to make that happen?" At the same time, we have to stay a certain course to meet the company's overall objectives.

IL: What's the biggest surprise a customer has thrown at you, and how did you handle it?

When I first started Kuebix, it was more of a consulting service, mainly building applications for large companies. As some of the engagements evolved, we began doing managed service projects to augment our customers' supply chains.

One company had a contract with a logistics provider that managed all their dedicated loads. They were in the process of switching to a new provider, when the incumbent decided to just pack up and leave. Unfortunately, the new contractor couldn't start work for six to eight months. So the customer asked if we could tender some loads for them.

They gave us the information in the morning, and by the end of the day we had processed all 70 loads. We ended up managing that business for one year, until the new company was ready to take over. I was proud of how everybody on our team stepped up, and we got it done.

IL: How do you motivate the people who work for you?

To get the best out of people, you have to be honest and direct. I try to constantly inspire my team to think big and make their ideas a reality. I like to tell them, 'We can't be good. We can't be average. We have to be great.'

People have to understand that everything can't be high fives. We all make mistakes; we all fail. But people don't get up in the morning and say, 'I can't wait to go to work today and fail.' They want to be the best they can possibly be. And when they do well, you give lots of praise.

IL: How do you spend a typical day on the job?

My desk is located in the middle of the office, but I rarely use it because I am constantly talking with my team and customers. I've been told I can talk a starving cat out of a fish wagon! My days are non-stop.

I want people to do things not because I told them to, but because they want to. At the same time, I have to communicate constantly: 'Here's where we're stuck. What's the best path? How do we get to a solution?'

What makes Kuebix special is collaboration—not only within individual teams, but across functions and with our customers and partners. I spend my day making sure every person on every team is communicating, and we constantly brainstorm, trying to make our product the best it can be.

One of Dan Clark's mentors was the late Brad Jones, president and CEO of USF Red Star. "He was the most demanding man in the world to work for," Clark says. "But from the perspective of what he taught me about work ethic and understanding people, he was the greatest person in my business life."

Here's an example. After Red Star remodeled its parking garage, Jones gave Clark an edict: Every one of the 500 or so people who used the garage had to pull into their parking spot nose-first. "I don't want anyone backing in," Jones said. "It doesn't matter why."

Clark started spreading the word at his pre-shift meeting. Lacking any explanation from Jones, he made one up. "It's about the infrastructure of the parking garage, load balancing—engines are in the front of the car," he told his team.

Three months later, Jones was pleased to report that he had just toured the garage and every car was standing in its spot nose-first.

"Why does it matter?" Clark asked.

"It doesn't matter," Jones replied. "But the fact that you can get these folks to believe in something you put together, and have them all follow it—that makes you a true leader. Not once did you say, 'Oh, Brad Jones told me to do this.' That's the biggest mistake people make. They say, 'I don't know why we're doing this; the old man wants us to.'"

The lesson? "You've got to be yourself," Clark says. "You have an objective in front of you, and you have to figure out a solution."