In July 2012, President Obama signed into law Congress' much-delayed surface transportation reauthorization bill, providing the U.S. freight industry with another two-year stay of execution absent a superseding transportation policy or plan. To some degree, the government's reprieve offers a parallel for where the U.S. trucking sector is currently positioned—a wait-and-see limbo somewhere between relative economic uncertainty and an absolute infrastructure/capacity shortfall. In either case, shippers and consumers will ultimately assume the burden and pay the price.

While trade improved enough to tighten truck availability and allow carriers to raise rates, great uncertainty remains—much of which has been shrouded by the optimism of election-year politicking.

Shippers responding to Inbound Logistics' 2012 Trucking Perspectives market insight survey are concerned with the here and now—namely, rising transportation costs. Carriers, too, feel their customers' pain at the pump, and are leaning on lessons from the recent past to help squeeze out costs.

Despite muddled forecasts and prognostications, a silver lining exists. The trucking industry has faced the worst of the U.S. recession, and its survivors are leaner and greener than they've ever been before. They are more sophisticated in terms of vehicle telemetrics, fuel consumption, sustainability, routing, and scheduling; they are receptive to intermodalism; and they are better at transportation and supply chain management.

What the recession wrought in 2008 has yielded a much more resilient trucking sector in 2012—well-positioned to ride out any more bumps that come its way.

In 2011, trucking companies reported a noticeable dip in their average tractor fleet size. But with the expectation of an improving economy, tightening capacity, further consolidation in the market, and increasing diesel engine emissions standards, carriers are investing in and expanding their fleets. In 2012, the average fleet size (tractors and vans) is 2,988 units—closely eclipsing the 2,946 that was reported pre-recession in 2007, and well above the 2011 average of 2,542.

While tractor fleets are expanding, companies are otherwise scaling down equipment, according to survey respondents. Since 2010, the average number of trailers has slid from 7,041 to 6,782 last year and 6,643 in 2012. Companies may purposely be jettisoning older units, and many have become more efficient in how they turn assets, so their requirements have changed.

In the driver's seat, however, there's no substitute for qualified talent. Trucking companies report a spike in the number of drivers (owner-operators included) in their stable, with the average jumping to 3,024 drivers from 2,507 last year.

Recruitment and retention has been a priority for all carriers. The military provides an emerging pool of well-qualified candidates. But a looming labor deficit will require truckers to invest even more in their drivers. In fact, 81 percent of surveyed trucking companies report that driver-related costs are their greatest challenge in today's market, trumping regulations and compliance (64 percent), rising equipment costs (51 percent), and fuel costs (49 percent) (see Figure 1). 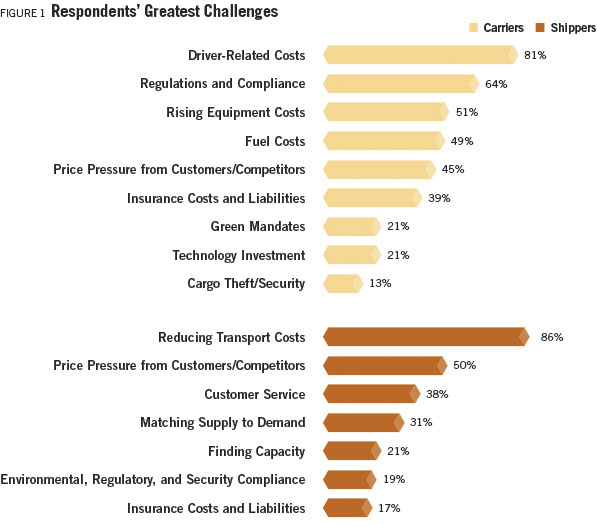 Among shippers, reducing transport costs remains the top priority, according to 86 percent of respondents. This represents a notable 12-percent uptick from 2011. Shippers, in turn, are under price pressure from customers and competitors to provide better economy in the products they sell—a challenge for 50 percent. Only 38 percent cite customer service as a concern. The latter two data points remain consistent with last year's figures.

Capacity is still relatively flush, with only 21 percent of shippers indicating it as a challenge. Still, the threat of a shortage is increasingly apparent. Forty-five percent of respondents experienced a scarcity of capacity during the past year, compared to 36 percent in 2011 (see Figure 2).

Mitigating all costs—at all costs—has been the trucking industry's mantra over the past few years. The recession forced carriers to squeeze out as much inefficiency as possible to glean more savings and remain competitive because freight shippers had buying leverage. That paradigm is now completely inverted. The investments and efficiency gains carriers worked toward during the recession are being repaid in spades.

For one, trucking companies have been able to increase rates beyond fuel surcharges. The price of diesel, while variable, has been oscillating at a much higher baseline cost since it spiked in April 2011, presenting shippers with an unavoidable expense that is exacerbated by higher freight pricing. Sixty-seven percent of surveyed shippers report experiencing a rate hike over the past year, compared to 53 percent in 2011 (see Figure 3). 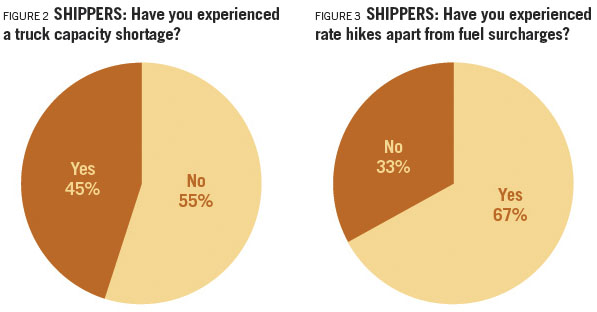 Shippers may now be resigned to paying more after a few years of having the upper hand. When asked the most important factors when choosing a trucking partner, only 77 percent identify price, compared to 88 percent last year—which topped considerations. Instead, 98 percent of respondents note that reliability is the number-one priority, suggesting that if shippers are going to pay more, they want dependable service.

As in 2011, customer service ranks third (61 percent), followed by capacity (43 percent). The importance of sustainability performance continues to drop, with only 21 percent of shippers identifying this as a critical selection criterion.

After driver-related costs, carriers rate regulations and compliance as their second-greatest challenge, according to this year's Trucking Perspectives research. In 2011, it ranked fourth. The message is clear: Truckers now recognize the full scope of complying with the FMCSA's two-headed legislative vehicle aimed at increasing safety on U.S. roads: the Compliance, Safety, Accountability (CSA) safety rating program, and a new Hours-of-Service (HOS) mandate, which could reduce daily driving times from 11 hours to 10, and restrict a driver's ability to reset the weekly work cycle with a 34-hour rest break.

The FMCSA is still tinkering with details as it solicits feedback from industry, and legal challenges will likely run their own due course, but the initial enforcement deadlines for both mandates are looming. In 2011, carriers reported greater concern over the impact reduced hours of service would have on their operations (42 percent) than on the CSA scorecarding initiative (16 percent)—41 percent viewed both as shared challenges.

The shift in perception may be attributed to the fact that HOS regulations are absolute, with less room for interpretation. FMCSA is pushing for trucking companies to equip their fleets with electronic on-board recording (EOBR) devices that closely monitor a driver's workday, in lieu of traditional paper-based logs.

The agency has since withdrawn that stipulation, and is conducting further research to study the efficacy of such technology and its impact on driver behavior. Still, a majority of trucking companies are already moving in that direction, perhaps sensing its inevitability. Sixty-seven percent of surveyed carriers currently use EOBRs in their fleets while 23 percent are looking into it, according to this year's research (see Figure 5).

Reducing driving hours does present challenges, however. "Networks are established and designed with HOS compliance in mind," explains one carrier. "Shortening hours will cause expensive realignment and put added pressure on driver availability." In addition to impacting service lanes and routings that customers have built their transportation/sourcing models around, HOS will also add ancillary costs for educating and training drivers and other employees about the new restrictions.

Some trucking respondents question the need to implement new HOS rules in the first place. "Research shows the number of accidents involving commercial carriers is on the decline," shares one source. "If the current system works and has been effective at reducing the number of accidents, we simply don't see the need for change—especially when it will further tighten capacity."

While carriers at least feel like they can control what is a known entity with HOS—regardless of aversion—the CSA parameters are much more subjective, which raises different concerns. The trucking industry generally welcomes efforts to improve safety, but many operators remain unconvinced that these new scorecarding metrics present an accurate assessment of performance. For one, CSA is a moving target, and recurring tweaks to the system create more confusion for shippers and carriers.

"CSA is always changing," explains one carrier. "Additionally, the Unsafe Driving Behavior Analysis and Safety Improvement Category (BASIC) is calculated using the number of trucks—not miles. Because of our increase in teams and miles driven, that BASIC is higher than carriers that are not driving as many miles."

Another respondent adds, "We support the overall objective of CSA to improve industry safety; however, the Safety Measurement System methodology is complex, and the FMCSA has focused on pushing it out to a public that isn't equipped to properly interpret it."

The consensus among carriers is that while the FMCSA's safety motivations are well-intended, they lack foresight. These regulations could have a draconian impact on the industry in terms of capacity and driver availability when the economy eventually recovers. 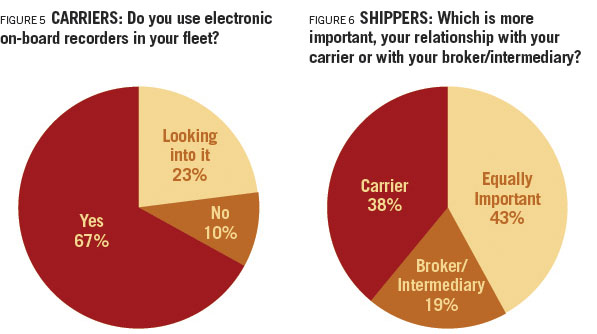 The shipper-broker-carrier dynamic has always presented an interesting narrative within the industry—and one that often changes with economic conditions. In 2011, nearly 70 percent of polled shippers stated that they valued their relationship with carriers more than brokers (seven percent), while 24 percent held both in similar esteem.

Carriers have the upper hand now in terms of supply and demand, and many have raised rates. Capacity is still relatively flush, according to the majority of surveyed shippers, so some may be inclined to work the spot market in certain lanes rather than locking into long-term carrier contracts. The market is essentially in limbo, somewhere between the fall-out of a recession and an upswing in recovery. Shippers appear to be keeping all their options open.

One shipper puts it this way: "I rely on a broker to find the best carrier for a specific lane. Carriers may change from load to load." Another respondent says, "each has unique abilities to solve different kinds of issues."

The majority of shippers, however, still vouch for their partnership with carriers over the long haul. "We need a direct line of communication to the carrier to establish a true partnership and have full visibility to anything that may affect our relationship," adds another source.

The focus on brokers will remain keen as capacity continues to tighten—which raises new concerns about whether intermediaries should face the same safety and liability scrutiny as carriers. The trucking industry at large has mixed opinions on whether freight brokers need to be regulated more.

Sixty-two percent of shippers and 53 percent of carriers believe the brokerage industry does not need any change in regulatory control (see Figure 7). Still, 33 percent of surveyed truckers think there should be more oversight, compared to 11 percent of freight buyers. 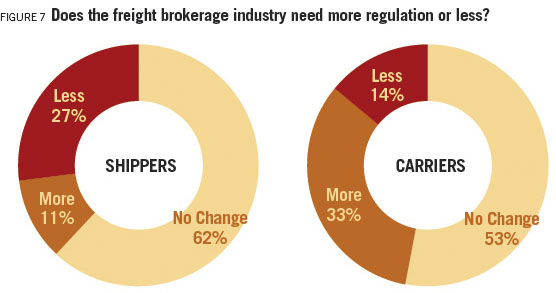 Carriers have more to lose when rogue brokers operate, as they are often held liable. The recently passed surface transportation bill increased the freight broker's surety bond requirement from $10,000 to $75,000 in an effort to prevent fraudulent activity. Such a measure will raise the bar of entry for brokers in what is currently a fractured industry.

But some carriers believe expectations need to be even greater, and that intermediaries should comply with the same standards that CSA and HOS will ultimately force on them.

"We invest in equipment, personnel, and cargo and liability insurance, and are held accountable for all aspects of the load," notes one carrier. "Freight brokers, who do not bear these costs, promise customers lower prices in general, then ask us to haul the loads. They need to have the same skin in the game as carriers."

Surveyed shippers tend to prefer the status quo, believing that more regulation will only strangle the industry and increase costs; and that less regulation will encourage unqualified companies to enter the market. "Brokers are a dime a dozen," says one respondent. "The good ones will survive changes in the market, and those that jump into the business because it's easy will go away."

Whether or not the brokerage industry finds such equilibrium remains to be seen, but most observers are convinced that freight brokers will increasingly play a more important role in the domestic supply chain—and therefore should come under greater scrutiny. As one source suggests, intermediaries earn their stripes by moving excess freight in a headhaul lane, saving empty miles in a backhaul lane, and relocating equipment to carriers' freight.

"Our industry cannot afford to pay empty miles as our driver base shrinks and driver utilization becomes a primary factor," he says. "With thin margins and companies' growing need to use brokers to achieve these results, the brokerage industry needs greater regulation."