Extreme Project Logistics: Take It to the Limit 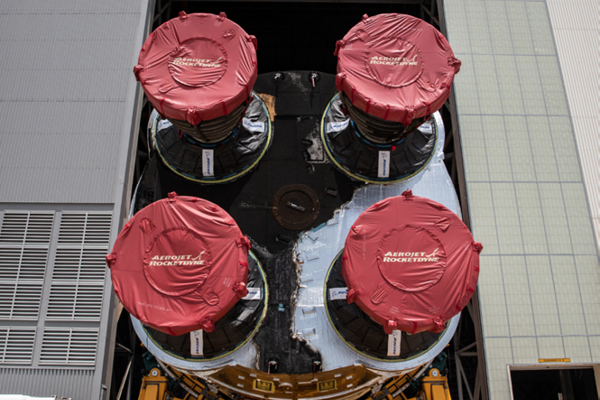 SLS is the most powerful rocket NASA has built for deep space missions, including missions to Mars. Its core stage is the longest item ever shipped by a NASA barge.

Demanding logistics projects can bring out the best in teams as they band together to navigate an array of complex challenges.

Some logistics challenges are nothing like any project done before. These special projects require unique approaches that depend on a combination of extensive planning and dynamic decision-making. Whether transporting dangerous wild animals, critical medical aid, or a rocket stage designed to power missions to deep space, these projects demand that supply chain teams think through difficult questions, collaborate across diverse teams and execute sophisticated solutions.

Here are three projects that exemplify those challenges.

Borne to Be Wild

On April 29, 2021, three lions, one lioness and three cubs arrived at the Kouga and Swinburne nature reserves in South Africa after living confined in inhumane conditions in the Ukraine.

Their arrival was the culmination of more than two years of work by activists determined to help them. It was also the result of the diligent efforts of Qatar Airways Cargo team members, who tackled the task of transporting the animals across three continents to get them to their new home.

"This was a big logistical challenge, but it was a great feeling for all of us who worked on this to see the video of the lions when they were released," says Kirsten de Bruijn, senior vice president, cargo sales and network planning, Qatar Airways.

The project was the first of Qatar Airways' new "Rewild the Planet" initiative, which resolves to transport wild animals back to their natural environments for free at the request of wildlife protection organizations. The initiative represents chapter two of the airline's WeQare sustainability program.

Qatar Airways Cargo agreed to manage the transportation of the lions in October 2020 in coordination with the Warriors of Wildlife (WOW) organization. WOW had been working to rescue the lions, but the complexity of the operation delayed the move until April 2021. The project revolved around a three-day trip from Kiev to Doha to Johannesburg.

The airline rerouted one of its passenger freighters from another station in Europe to Kiev, where the airline does not have passenger flights, to pick up the lions. The animals were transported in the lower deck, or belly, of the plane. WOW staff looked after the animals' well-being during the trip.

When the passenger aircraft reached Doha, it was parked alongside Qatar Airways Cargo's live animal facility. There, the animals were fed raw meat and provided water through their cages. The wait for the lions' next flight was about four hours.

"We have the best people working for us who made sure the animals remained calm throughout their journey, including during transit," de Bruijn says.

Numerous team members—from ramp operators and forklift drivers to the live animal facility team and the charter teams that managed the rerouting of the flight, among others—ensured the process went smoothly.

Qatar Airways Cargo is accustomed to transporting a range of animals, but lions and other wild animals create unique challenges.

"For animals such as lions, the operational procedures and checks are more important than usual," de Bruijn says. "And because these lions were from private owners and captured for so long in a very specific environment, it made it even harder to know how they were going to react."

"Over and over again, we checked the quality of the cages and did all the proper checks with the ground operation staff at departure about the way that the lion cages would be loaded," de Bruijn says. "We wanted to make sure that the animals would be stable throughout their journey."

Qatar Airways Cargo's team in Johannesburg managed the unloading of the lions after the flight from Doha, and WOW oversaw the 12-hour truck trip that followed to the nature reserve.

The lions will spend a few months in a protected area, becoming accustomed to exploring nature, before being transferred to a much larger nature reserve where they will be protected for the rest of their lives.

"This logistics project was special," says de Bruijn. "And we're talking to other nongovernmental organizations because we want to do more, and we want other airlines to follow."

A Wing and a Prayer

When India was struck by a dramatic surge of COVID-19 cases in spring 2021, IAG Cargo, the cargo division of International Airlines Group, and its sister airline British Airways were watching closely.

"We have deep affection for the country and its people," says John Cheetham, chief commercial officer at IAG Cargo. "The way the virus accelerated in India caused us great concern. When some charities reached out, desperate to get aid to the people there, we immediately wanted to help."

In response, IAG Cargo and British Airways organized and funded a special charter to send aid to India. The flight, which departed on May 5, 2021, carried 27 tons of medical aid to Delhi. The life-saving supplies—which totaled more than 1,300 items—included hundreds of oxygen cylinders, oxygen concentrators, respirators, and blood oxygen saturation monitors. British Airways also donated care packages for families in need.

IAG Cargo put together a special project team to manage the process. Because the flight carried cargo donated for charity, there was uncertainty beforehand as to what the shipment would encompass—how large it would be and what exactly it would contain. That made planning for how to load the plane and manage the inventory difficult.

The items being moved also created particular logistics challenges in those uncertain circumstances. Oxygen cylinders, for instance, are difficult to stack and load.

"The charities didn't know exactly what supplies they were going to have and when and how they were going to be delivered," Cheetham says. "They didn't have all the details that normally we would have for an advanced shipment, but through a lot of communication and collaboration we got it done."

IAG Cargo depended on crew members to volunteer to participate in the effort, including a double crew on the flight since crew members were not allowed to stay over in India because of COVID-19 restrictions.

"We had people working all hours of the day trying to coordinate and make this happen," he adds. "Everyone realized the severity of the situation and has a deep personal affection for colleagues, friends, and families in India."

IAG Cargo collaborated with British Airways' operations control personnel, crews and management to stand up the aircraft. It also teamed with DB Schenker, which served as the freight forwarder, to ensure the freight was prepared, customs was cleared, and the appropriate labeling was implemented.

The first effort was so successful that IAG Cargo and British Airways worked with partners to deliver urgent medical aid to India a second time, a few weeks later. This time, the shipment comprised 18 tons and 5,000 pieces, including PPE supplies and oxygen concentrators for frontline hospital workers, donated by charities including Oxfam, Khalsa Aid, and Christian Aid.

"It's rewarding to help," Cheetham says. "But there's always more to do."

Setting the Stage for Deep Space

At a towering 212 feet, NASA's Space Launch System (SLS) core stage is the world's tallest rocket stage and the most powerful rocket ever built for deep space missions. Manufacturing and testing SLS is a highly complex process requiring expertise, intense planning, and collaboration. So is moving it.

In April 2021, SLS arrived by water to NASA's John F. Kennedy Space Center in Cape Canaveral on the eastern coast of Florida. It completed a 900-mile journey on a specialized barge called Pegasus in preparation for the planned 2021 Artemis I launch, the test flight of NASA's Orion Astronaut Spacecraft and SLS.

The SLS trip began at NASA's Michoud Assembly Facility in New Orleans, where it was manufactured. Pegasus first ferried SLS to the Stennis Space Center near Bay St. Louis, Mississippi, for testing—a one-day trip—and then to Kennedy, which took six days.

By Tug and Tow

Tugboats and towing vessels moved the barge, which has no engine, over the course of a journey that included both inland and open-ocean waterways. The SLS core stage represents the longest item ever shipped by a NASA barge.

Once SLS arrived at Kennedy, a new challenge began as the massive rocket stage was transferred from the barge into the Vehicle Assembly Building for eventual integration with twin solid rocket boosters, the Orion spacecraft, and additional flight hardware.

Preparations at Kennedy for the arrival of the core stage were extensive. "There was an extraordinary level of communication structured into the core stage transport," says Mike Chappell, deputy director for program integration for Jacobs, the prime contractor for NASA's exploration ground systems.

Ahead of SLS' arrival, approximately one dozen trucks of ground support equipment arrived by commercial carrier at Cape Canaveral to be offloaded and positioned for the processing of the core stage. Preparing the ground systems in the Vehicle Assembly Building to accommodate and process SLS was "an enormous undertaking," Chappell says.

Team members also needed to be prepared and in place to dock the barge and offload it. It took a couple of days to transport ground support equipment off the barge and to remove the core stage.

The arrival of SLS was the centerpiece of preparation for the Artemis launch. That process involves an array of supply chain challenges, as unique, sophisticated hardware is manufactured, tested, and moved in careful coordination.

For example, solid rocket motors manufactured in Utah traveled via rail to Cape Canaveral. The launch vehicle stage adapter was made at Michoud, and, like the core stage rocket, sent to Stennis for testing and then shipped to Cape Canaveral by barge.

Chappell says NASA and its contractors remain focused on a launch schedule. Delays happen with individual pieces of the project, affecting other components as a result.

Up for the Challenge

"Everybody working on this project has to be extraordinarily flexible and adaptable because it's a very dynamic process," Chappell says. "We constantly adjust schedules because there are so many moving pieces, parts, and players. Everyone needs to be flexible and have the systems set up to do that."

Fortunately, NASA is accustomed to exactly these types of challenges.

"At NASA, we love these big, complex projects," Villarreal says. "There are always going to be issues that come up, but that's what we do best—get over hurdles, resolve issues, and keep moving forward."