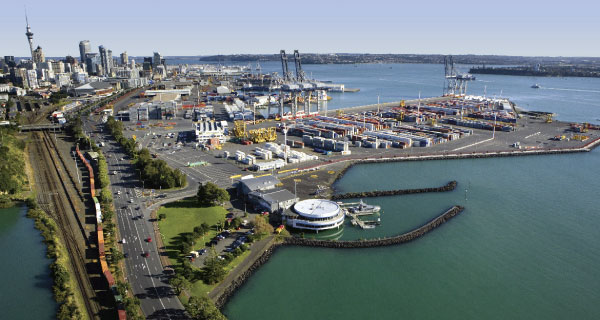 The Port of Auckland, New Zealand, is bringing marine transport directly to shipper doorsteps with the debut of its new Wiri-to-Waitemata seaport rail link. The intermodal shuttle connection helps exporters and importers drive efficiency and increase flexibility by enabling them to drop off and pick up containers without negotiating Auckland's motorways. Shippers can use the inland Wiri Freight Hub as a staging post, freeing up room at the seaport and maximizing rail transportation in between.

Authorities expect the new link will save as many as 100,000 truck trips to the city per year when functioning at capacity. Given that many port customers are based within six miles of the inland hub, they anticipate the rail connection will reduce carbon emissions by up to 40 percent.

DB Schenker recently procured a $500-million contract to provide worldwide and national transport for Australia's vast Gorgon gas project. The Kellogg Joint Venture, a consortium under contract to Chevron, Exxon/Mobil, and Shell, plans to start producing gas in 2014. As part of the four-year contract, the global freight forwarder will provide integrated logistics services to transport more than two million metric tons of equipment to module production plants in Asia or directly to a planned gas liquefaction plant on the northwest coast of Australia.

South Korea has recently taken an aggressive approach to forming global trade agreements. It currently has 14 FTAs either signed, in process, or under joint study. In the next 10 years, South Korea is expected to sign treaties with more than 60 countries.

Liberia's government recently announced that APM Terminals is its preferred bidder for operating a 25-year concession at the Port of Monrovia as part of a public tender process. The project entails rehabilitating the existing Marginal Wharf, developing container and general cargo operations in the terminal, and taking on responsibility for marine services throughout the port. A new berth, more efficient yard handling procedures, and the installation of better equipment will transform the port into a more competitive, world-class facility capable of handling modern, deep-draft vessels.

With Liberia's abundant labor force—3.4 million people—and wealth of natural resources, the government is looking to privatize its port industry, bolster the national economy, and create more jobs in Monrovia. APM Terminals is already the largest port and terminal operator in West Africa, with facilities in the Ivory Coast, Benin, Ghana, Nigeria, Cameroon and Angola, and a project underway at Pointe-Noire, Congo.

Logistics Development, One BRIC at a Time

India has reason to be optimistic, according to Transport Intelligence's latest Emerging Market Logistics Index. The country ranks first among 38 developing nations, based on the appeal of its logistics market to foreign investors. The report measures three criteria: market size and growth attractiveness, market compatibility, and connectedness. Other "BRIC" countries also fare well in terms of how they are building out transportation and logistics infrastructure and services to attract investment. The top five emerging markets are:

CN Settles in the Heart of the New West

CN is looking to join the stampede with a new $100-million logistics park northeast of Calgary. Plans for the 680-acre spread, expected to be complete by 2013, include: an intermodal terminal with room for customers to co-locate or custom-build their own facilities; a multi-commodity transload and warehouse center; an automotive compound; and a liquid/bulk transload and distribution facility.

Calgary is the third-largest distribution center in the country and is fast becoming the logistics hub of western Canada, serving a rapidly expanding market. Combined with CN's extensive rail presence in the region, shippers will be well-positioned to distribute freight across the western provinces, whether sourced from Asia through the West Coast or coming from eastern Canada and the United States.