Congress asked the FMC to probe allegations about Canada's port practices in 2011 after Washington state senators Patty Murray (D) and Maria Cantwell (D) raised complaints. Even though the agency has no overriding authority in Washington, the report could steer future legislation toward repealing or reforming the U.S. Harbor Maintenance Tax (HMT).

The HMT is imposed on shippers/consignees based on the value of goods being imported and exported through U.S. ports. Revenue is used to fund dredging projects. The HMT has long been criticized for preventing short-sea shipping activity between Canada and the United States, and the FMC says doing away with it is the best way to counteract U.S. shippers who prefer bringing freight through Canada.

While most Canadian ports charge importers a user fee instead of a tax to similarly help maintain harbors, Prince Rupert and Vancouver have deep channels and don't require routine dredging as other U.S. West Coast ports do. So it's less expensive to bring containers into Prince Rupert and transport them via rail across the border.

Canadian port authorities are affronted by FMC's suggestion that security is compromised because companies legally re-route freight through their hubs. Some say containers entering the United States from Canadian ports are actually more secure.

"Every container that comes into Canada undergoes radiation screening," says Robin Silvester, chairman and CEO of the Vancouver Port Authority. "When it crosses into the United States, it's screened again as a further security measure. That doesn't happen with containers entering the United States from other countries."

An Olympic Thirst for Better Forecasting

Venues that experienced food and drink shortages during the opening days of the London 2012 Olympics suffered from poor demand forecasting, rather than supply chain execution, according to a recent article by UK retail magazine The Grocer. Organizers failed to consider that attendees would stay on-site for a longer time. As the Games commenced, stockouts and long lines occurred at locations including Wembley, Old Trafford, Greenwich Park, Horseguard's Parade, and Olympic Park. The shortages came as a surprise to observers who had otherwise praised the organizers' transportation and logistics planning, in particular the Olympic Route Network.

Lost in the conversation surrounding the Panama Canal's impact on U.S. ports when a third set of locks opens in 2015 is the emergence of new competitors—a Cuban port under development in Mariel; Caucedo, Dominican Republic; Freeport in the Bahamas; and Kingston, Jamaica.

Uncongested, natural deepwater harbors are hallmarks for Caribbean countries, and a container boom is likely when heavily laden New Panamax vessels begin transiting the Canal. The region's proximity to major east-west and north-south shipping routes makes it an ideal transshipment hub for large freight volumes that can be offloaded onto smaller ships bound for North and South America. At the same time, Caribbean ports will have ample opportunities to develop value-added assembly and logistics activities.

In Jamaica, optimism is palpable. Consider a recent article in the Jamaican Observer by David Mullings, CEO of Orlando, Fla.-based diversified holdings company Keystone Augusta, which maintains offices in Kingston.

"Each time I attend a conference with other countries pitching their advantages and why I should consider doing business there, I always picture the map of the Western Hemisphere in my head," writes Mullings. "I mentally draw lines from China through the Panama Canal to the seventh-largest natural harbor in the world—Kingston Harbor—and then on to the east coast of the United States and Europe."

He references Singapore's success in leveraging a deep natural harbor to become the world's busiest cargo hub. It took the Asian city-state 50 years to achieve this status. Mullings ponders whether Jamaica could ever replicate that success.

"Imagine a car body made in Mexico, an engine coming from Germany, and parts from China, all landing in Jamaica at the port, then sent to Vernam [an abandoned U.S. Army Air Force base under development] to be assembled, and the finished car shipping to Port Everglades for delivery to a dealership," writes Mullings.

"This is not blue sky thinking," he adds. "This makes complete sense, and saves money for the manufacturer. We may have missed the first boat, but 2015 presents a real opportunity for us to take advantage of our unique geographic advantage that cannot be copied."

About half of the imports into the United States arrive by ocean vessel, followed by about one-fourth arriving by truck, rail, or pipeline from Canada or Mexico. The percentage of imports by air—the fastest and most expensive transport mode—has declined in recent years. 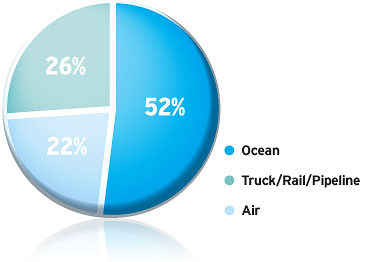 In the context of economic growth, Japan's cultural mores and aging workforce have been widely discussed and debated. Its population is expected to shrink 33 percent by 2060, which will have major implications on how the country approaches socio-economic policies over the next 50 years. That said, Japan is already beginning to feel some unintended consequences.

For example, pharmaceutical companies are being forced to improve operational efficiency and rationalize sourcing and distribution strategies because of the country's aging population, drug price changes, and patent expirations, according to a new report from New York City-based GBI Research.

Japan's pharma supply chain still follows a traditional model, where drugs are distributed to patients only through wholesalers. A price quotation system that heightened competition among distributors created a wholesale monopoly, which has affected pricing and profit margins. Beyond that, government regulations that prohibit foreign producers from entering the market has led to an insular supply chain susceptible to risk—as evidenced by the crippling impact of the 2011 earthquake and tsunami.

Since then, manufacturers have instituted changes to ensure continued production in the event of a disaster, thereby improving supply chain stability, according to the GBI report.

Today's economic news ticker is anything but optimistic: Europe faces economic disaster, Asian exports continue to weaken, and North American growth sputters. Even Germany, which was remarkably immune to Europe's woes earlier in the year, is now showing signs of uncertainty, with GDP growth for 2012 expected to fall below one percent.

European-based third-party logistics providers such as CEVA Logistics have an up-close view of the proceedings.

"It was a challenging quarter, with flat air and ocean markets, increasing pessimism from customers, and a significant economic downturn in southern Europe—Italy, Spain, and Greece, in particular," says John Pattullo, CEO, CEVA Logistics.

While Pattullo has seen a marked slowdown in China, where growth rates have stalled—especially in the automotive sector—he has yet to see an impact elsewhere in Southeast Asia. In Europe, it's a much different story.

"A lot of the reduction in southern Europe has already happened, so we will begin to see year-on-year growth flatten out," he observes. "In northern Europe, we are now seeing slower growth. The Eastern European market, however, is still buoyant. The European pie is comprised of three different pieces, and each is at a different place in the economic cycle."

"The contract logistics and freight forwarding market in Europe—and for that matter, the world—is a fragmented landscape," he notes. "The top 10 companies only have about 28-percent market share. It's inevitable that further consolidation will occur over the next five to 10 years. It's also highly likely that a significant player will emerge from a developing economy."