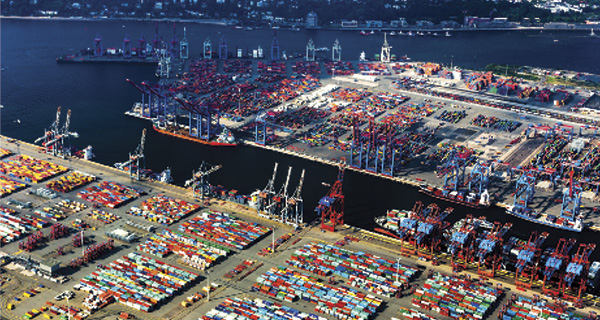 The Port of Hamburg is among several European ports currently experiencing congestion issues.

Europe's top ports — Rotterdam, Antwerp, and Hamburg — are among several cities dealing with congestion issues. Europe is constrained by space, with dense road networks, heavy traffic, and a lack of rail capacity, infrastructure, and utilization. Consequently, many cities serve as feeder ports for short-sea shipping throughout the European Union — in addition to import and export destinations — which only increases traffic on and off terminals.

Water and road transportation offer little latitude, so ports are dependent on technology and resources to speed freight flows. And, as containerships continue to get bigger, ports need to accommodate longer loading and unloading times.

Rotterdam started tackling the problem a few years ago when it unveiled a system that scans cargo on moving trains, rather than unloading carloads. The Port of Rotterdam uses high-power X-ray scanners to vet densely packed cargo in trains moving at speeds up to 35 miles per hour. As a result, Dutch Customs can inspect nearly 200,000 rail containers per year, or a single 40-foot container in eight-tenths of a second.

As larger ships continue to come online, the challenge for European ports and countries is identifying how to better integrate and utilize rail freight transport to speed throughput, and address congestion and capacity issues.

Beset by deteriorating freight volumes and overcapacity, ocean carriers have been pulling up anchors in search of ways to optimize asset utilization and plug leaking profits. They have laid up vessels, reconfigured services and lanes, and entered into alliances to help offset market volatility. Those efforts seem to be paying off as shippers begin to navigate another peak season.

In August 2014, Maersk Line raised freight rates on routes from Asia to northern Europe by $450 per 20-foot container. Other ocean carriers likely will follow suit.

Leading steamship lines in the Asia-U.S. trade have similarly called on carriers to raise rates by at least $600 per 40-foot container (FEU) due to sustained third-quarter cargo demand across major commodities.

Freight rates plunged to unprofitable levels for most carriers in 2013 as a result of overcapacity in the market.

Although Russia accounts for a small percentage of the U.S. food export market, the country's recent ban on U.S. foods could significantly affect the poultry, meat, tree nuts, and fish export industries, which cumulatively have sent more than $69 million worth of goods to Russia between January and June 2014.

Doing business in India just got a whole lot easier, thanks to a recent government move that allows foreign manufacturers that produce product domestically to engage in e-commerce, even if they source materials from Indian third-party producers. In effect, the move allows companies to bypass joint ventures and other reselling arrangements, and directly sell into the market.

India's draconian foreign direct investment (FDI) policies have long been an economic development deterrent, largely responsible for the country's lagging domestic market. In the past few years, the government has begun liberalizing FDI guidelines in hopes of luring multinationals, while raising standards and expectations.

It's important to note that the new measure does not include foreign retailers that are looking to set up shop in India and sell online. So, for example, companies such as Sony and Apple—both of whom would like to establish a direct omni-channel presence in the world's second-largest populated country—would be prohibited because they source product from elsewhere in Asia.

The promise of tapping India's middle-class consumers has companies champing at the bit. Amazon, one of the first foreign entrants into the e-commerce space, recently announced that it would invest $2 billion into its India business as it competes with homegrown Flipkart for market share.

But the government's emerging policy makes it very clear: companies willing to invest in the country and bring jobs will be rewarded with preferential status in terms of e-commerce market entry.

Building Trust at the Canada-U.S. Border

As North American reshoring continues, and NAFTA trade builds, the need for secure, fast, and efficient cross-border transport is amplified. Recent changes to the Trusted Traveller and Trusted Trader program between Canada and the United States reflect these developments.

Border officials have introduced non-resident importers into Canada's Customs Self Assessment (CSA) program, according to a statement from the Canadian Trucking Alliance.

Prior to this amendment, only Canadian importers qualified for membership to CSA. Now U.S. companies importing to Canada are also qualified.

In a move that is likely to quiet public sector protests over noise pollution, Frankfurt-based rail logistics company DB Schenker is investing $308 million to retrofit its entire fleet of trains with new silent brake blocks. By the end of 2014, 200 upgraded trains will be in service across Germany. The company aims to complete the overhaul of 60,000 cars by 2020.

The composite block innovation, which eliminates vibration from the wheel-rail interface, received European approval in July 2013, following two years of testing as part of the International Union of Railways' EuropeTrain project. The new LL-block reduces trackside noise by 10 decibels, and is expected to halve the perceived noise of the train. The technology is also easier and less expensive to retrofit because it eliminates the need to upgrade the entire braking system.