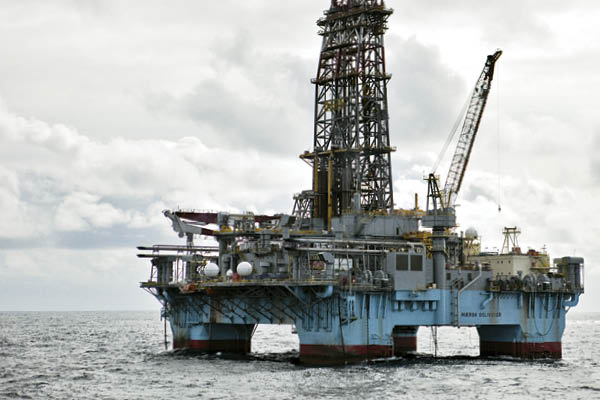 AP Moller-Maersk will focus more on oil and drilling operations, and less on container shipping.

The name most synonymous with container shipping is taking a break from navigating an increasingly agitated ocean trade. Denmark's AP Moller-Maersk is shifting the focus of its business activity from shipping, choosing instead to concentrate on its oil, drilling rigs, and port operations, according to a Financial Times report.

AP Moller-Maersk will reduce investment in Maersk Line, the company's shipping container operation. The carrier is the world's largest steamship line, with a 16-percent share of the global market. The move will diversify and bring more balance and stability to AP Moller-Maersk's different operating areas.

"We will move away from the shipping side and toward higher profit generators and more stable businesses," says Nils Andersen, CEO, AP Moller-Maersk. "When we have made that shift, more than 50 percent of our capital will be tied up in our three other businesses. Maersk Line will then account for 25 percent to 30 percent of capital. We will have four businesses of almost equal size."

Deutsche Post DHL's Indian arm plans to invest $129 million via its supply chain division to build new warehouses and transport facilities in India as it positions itself to tap the opening up of the retail sector.

"With government investments in infrastructure on the rise, coupled with streamlining of regulatory policies, we are enthusiastic about the fast-paced growth in the logistics market," says Paul Graham, chief operating officer of DHL's supply chain division for Asia. "We want to be ready when shippers look to expand."

India recently made the politically risky decision of allowing foreign direct investment in its supermarket industry. The expectation is that this exposure will attract greater investment in India's much-maligned infrastructure, which has presented major challenges distributing product to retail stores.

"The new retail legislation places emphasis on making India a sourcing hub, and that is important," says Graham, adding that DHL was ready to bring its global retail logistics expertise to India.

Amid economic recession and recurring congestion issues, Europe is turning to a conventional means of transport to reduce costs and ease carbon emissions. Thanks in part to the European Union-funded pilot project, CycleLogistics, and a reputation for progressive environmental policies, some continental shippers are using bicycles to move parcels and small shipments in urban areas.

While free-wheeling messenger services are not foreign to major metropolitan cities in the United States and elsewhere around the world, the European Union is making a concerted effort to shift motorized freight to bicycles. Research suggests that as much as 25 percent of all cargo traffic in European cities could make the switch. And if companies integrate traditional van delivery hub-and-spoke urban delivery operations with pedal pushers that make local deliveries and pick-ups, the percentage could grow even more.

CycleLogistics expects that its current pilot projects, which span 12 European countries, will expand this niche market into a serious alternative for transporting light goods in inner cities.

As yet another sign of China's inward-focused domestic investment yen, the country recently raised its planned railway investment by $3.2 billion from its initial $100-billion earmark, the third such increase in 2012. The revised budget comes as the government tries to shield the world's second-largest economy from stiff global headwinds, including fast-tracking infrastructure projects—adding to its already august and progressive reputation in that regard.

The government has approved 25 rail projects that could be worth more than $112 billion as part of measures to stimulate the country's slowing economy. China's rail investments slowed sharply in 2011 after a fatal high-speed train crash that led to a shakeup in the railway ministry staff. But the government has been trying to boost investment since then, approving rail projects and giving the green light for the ministry to raise money through corporate bonds.

The government hopes these efforts will help stave off speculation that the continuing euro zone crisis, and the United States' sluggish economic recovery, will erode its economic growth forecasts even further.

U.S. import shipments are up three percent in the 2012 holiday season compared to 2011, and are at their highest level in five years.