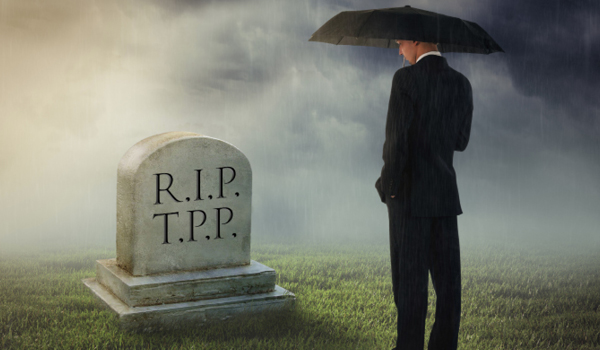 TPP is Dead. Is NAFTA Next?

A number of important policy issues are still up in the air for the United States, but President-elect Donald Trump has made one thing clear: The Trans-Pacific Partnership (TPP) is done.

The TPP—a proposed free trade agreement between the United States and 11 Pacific Rim countries—became a target during the election, with both major candidates promising it would never see the light of day. The deal garnered heavy criticism for its potential to ship American jobs overseas.

While Trump has backed off some campaign promises after winning the election, he seems to be sticking to his guns on this one. Putting the TPP on the chopping block is on the shortlist of things Trump plans to accomplish in the first 100 days of his presidency.

TPP supporters say that with the United States out of the way, China will fill the void. The country could potentially negotiate new deals in the Pacific Rim, possibly folding parts of the trade deal into its One Belt, One Road initiative, which aims to rebuild the Silk Road between Europe and Asia. If this happens, America will be left out in the cold.

President-elect Trump promises that TPP will die by day 100 of his term, but it seems to have died even before his first day. With that out of the way, the new administration can set its sights on the North America Free Trade Agreement (NAFTA). The President-elect wants Canada and Mexico to renegotiate the terms of the Clinton-era deal. Depending on the result of the negotiations, Trump says he is prepared to withdraw from it entirely before his first 200 days are through.

Canada is willing to come to the table over NAFTA, according to Canadian Ambassador David MacNaughton. And while Mexico is happy to sit down and explain the "strategic importance" of the trade deal with the next U.S. president, the country doesn't want to renegotiate the terms of the agreement, says Ildefonso Guajardo, Mexico's economy secretary.

Korean liner Hyundai Merchant Marine (HMM) was originally expected to take on most of Hanjin's container assets, but Korea Line made a better offer, according to a spokesman for the District Court, leaving a surprised HMM fresh out of luck. HMM had the backing of government officials and creditors, and many had considered the acquisition a done deal.

The judge presiding over the case said Korea Line not only made a better financial bid, but also agreed to take on all the workers involved with the trans-Pacific business, five containerships, and Hanjin's stake in Total Terminals International, which operates a terminal at the Port of Long Beach. Korean media reports that the deal will take place for about $215 million.

Korea Line's shares plunged after the deal was announced, which is unsurprising considering the amount of competition on container shipping in Asia-U.S. lanes. Maersk Line and MSC hold more than one-third of the market share on those routes, and the four carriers forming the newly founded Ocean Alliance are expected to take up roughly another quarter of that business beginning early in 2017.

Thanks to Hanjin's bankruptcy, the container market did see a significant upturn in the third quarter of 2016, albeit a temporary one. "It was certainly a stand-out quarter," says Patrik Berglund, CEO of shipping market watch index Xeneta. "Short-term rates on the world's number one trade route—Far East Asia to North American main ports—sky-rocketed, largely due to Hanjin transforming oversupply to undersupply almost overnight.

"This enabled significant rate hikes, with the market average price for 40-foot containers climbing by 47 percent across Q3," he adds.

Even though Hanjin briefly tightened capacity, most of those contracts have now gone to other carriers. Hanjin's ships do give Korea Line enough capacity for a weekly service between Asia and the United States, but finding contracts to fill those ships won't be easy.

After an uphill battle that spans decades, Prime Minister Theresa May approved London's Heathrow Airport for a third runway. Heathrow's existing runways have operated at nearly 100-percent capacity for the better part of a decade; London's other airport, Gatwick, has begun to suffer from similar problems.

Heathrow currently handles 31 percent of the United Kingdom's non-European Union trade, and the new runway is expected to open up additional markets for the country's private sector.

"I am proud that after years of discussion and delay, this government is taking decisive action to secure the UK's place in the global aviation market—securing jobs and business opportunities for the next decade and beyond," said Chris Grayling, the UK's transport secretary, in a public statement.

"A new runway at Heathrow will improve connectivity in the UK itself and crucially boost our connections with the rest of the world, supporting exports, trade, and job opportunities," he adds.

The project became even more necessary following Britain's 2016 vote to exit the European Union. Additional flights are expected to significantly boost the country's economy, and as the UK negotiates new trade agreements with the rest of the world, additional flight capacity will help support connections with trading partners.

The third runway won't be opening any time soon, however. The project still requires Parliamentary approval, and won't be voted on until sometime in late 2017 or early 2018. The runway itself isn't expected to be complete until 2025 at the earliest.

Packaged in the sale of Hanjin's Asia-US and intra-Asia networks: