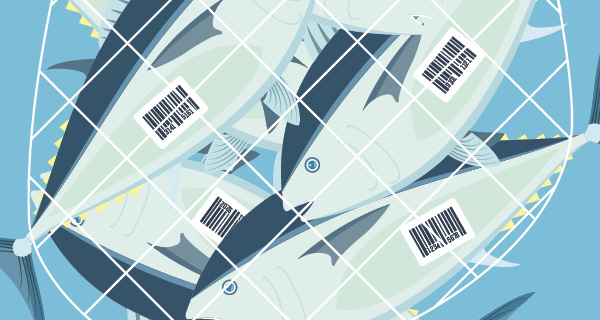 Buried within the controversial Trans-Pacific Partnership (TPP) are provisions that will help protect global fisheries—and consumers—from widespread fraud in the seafood supply chain. It's a pet project of the Obama Administration, which specifically created the Presidential Task Force on Illegal, Unreported, and Unregulated (IUU) Fishing and Seafood Fraud in June 2014 to expand partnerships around the world that would strengthen enforcement against nefarious activities.

There's also a supply chain impact as it relates to information and traceability requirements. That's why Ecuadorean tuna supplier Marbelize recently entered an exclusive partnership with U.S. tracking firm Frequentz to proactively address looming traceability requirements. Examples of the types of information that may be collected include who harvested the fish, type of species, and location of harvesting.

As one of the largest tuna suppliers in the world, Marbelize will use track-and-trace technology to develop a fully integrated supply chain visibility solution from sea shelf to store shelf.

"The industry is adapting to the ever-changing demands of consumers while also remaining true to social responsibility and sustainability objectives," says Andres Cuka, chief operating officer of Marbelize.

The problem is companies that source from these areas do not have proper visibility to or information about suppliers. Consequently, they unknowingly enable continuing labor abuses.

As supply chains across all industries embrace sustainability mandates, and as social media holds brands accountable, companies face even more pressure to comply. The threat of sanctions from countries such as the United States only ups the ante.

Port congestion is an inevitable problem in Europe, given space constraints and container volumes in urban areas. But a new solution at the Port of Hamburg may alleviate some of these bottlenecks.

A special automotive wireless LAN communication system called Vehicle-to-X (V2X) enables vehicles to communicate securely and wirelessly with infrastructure elements such as traffic lights and road signs. For example, an approaching line of vehicles can communicate with the intelligent traffic light to turn it green or keep it green, allowing the vehicles to pass the light without stopping. Additionally, the traffic light utilizes RFID technology to identify vulnerable road users in the vicinity, and send automatic hazard warnings to approaching trucks via V2X.

"The intelligent port is a key component of the Digital City Strategy adopted by Hamburg's Senate at the beginning of the year," says Frank Horch, Hamburg's Minister of Economy, Transport, and Innovation. "The innovations currently being tested in the port by HPA and NXP will play an important part in making the port even more competitive, and will add to the location benefits for the city of Hamburg. We need intelligent traffic solutions that improve both the safety and quality of life of the people who live here."

Africa is the last frontier of the global supply chain. As the continent opens up, it will become a magnet for manufacturing and consumption. To date, infrastructure development has been sporadic, fractured, and often exploitative. But new data from Ernst & Young (EY) suggests more sustained investment.

Capital investment into Africa surged to $128 billion, a year-on-year increase of 136 percent, according to the EY 2015 Africa Attractiveness Survey. Perhaps more telling, the average investment increased to $174.5 million per project, up from $67.8 million in 2013.

"The perception of investing in Africa has traditionally been rather negative, coupled with the fear of the unknown," he says. "However, in 2014, traditional investors refocused their attention on the continent, attracted by its strong macroeconomic growth and outlook, improving business environment, a rising consumer class, abundant natural resources, and infrastructure development. These factors have resulted in global capital investment and job creation hitting an all-time high during 2014 on the continent."

"Supply chain costs are up to nine times more expensive in Africa compared to other regions in the world," Brewer adds.

Supply chain collaboration has reached the point where competitors are sharing resources and costs on the back end. Third-party logistics (3PL) providers are making introductions by devising creative vertical-centric solutions.

CEVA Logistics, for example, recently opened a TireCity hub in Somaglia, Italy. The 540,000-square-foot distribution center is specifically purposed for warehousing and crossdocking tire products. TireCity is not alone. CEVA has also established a City of Books, City of Pharma, and TechCity.

"This hub is also the beginning of a strategic course of growth in the automotive sector in Italy that starts from tires as a key and vital element for vehicles such as cars, motorcycles, and industrial and agricultural vehicles," Chiellino adds. "In the current economic climate, CEVA's collaborative approach can be an opportunity for innovative processes, improving supply chain responsiveness to meet user demand and reducing costs."

Poland is one of the European Union’s rising stars in terms of economic performance – in large part due to its proximity to Germany, cheap wages, and sound fiscal policy. Inland transportation infrastructure has long been a problem, inflating total logistics costs. But signs of improvement are evident. G6 Alliance members – APL, Hapag-Lloyd AG, Hyundai Merchant Marine, Mitsui O.S.K Lines, Nippon Yusen Kaisha, and Orient Overseas Container Line – recently decided to extend their Asia-North Europe Loop 7 service to include a call at Gdansk. The deep-water Polish port just began construction on a second container terminal in early 2015.

The Polish port city is an obvious outlier among the usual Eurasian suspects. But it reflects a major vote of confidence in Poland’s economy. Asian imports to Europe have been drying up, and Polish consumers are a new target for Chinese producers.

Did the firework displays seem larger this Fourth of July? In May 2015, U.S. firework imports were the highest for one month since 2011. This graph shows the top five leading fireworks importers, which together make up nearly 70 percent of all firework imports. The biggest by far is Jake's Fireworks in Kansas, which already imported more than 2,900 TEUs in 2015.

Logistics Learning Inside the Box

In the 1950s, containerization made global shipping easier. Today "the box" lends itself to global learning.

Mumbai, India-based third-party logistics provider Safexpress is remodeling containers to use as mobile classrooms for logistics education. Safeducate, the provider's skills training arm, opted for the 40-foot variety because they are inexpensive and can be easily moved to remote locations. The company runs 20 learning centers located within logistics parks across the country, and plans to educate more than 10,000 people over the next decade.

Containerized classrooms afford similar efficiencies as cargo: They are low-cost, mobile, environmentally friendly, and quick to set up anywhere with land availability and electricity.

While the Trans-Pacific Partnership has dominated much of the recent debate over U.S. trade agreements, U.S. fashion and retail organizations are bullish about Congressional support for an extension to the African Growth & Opportunity Act (AGOA).

AGOA, which was first enacted in 2000, allows Sub-Saharan African countries to have duty-free access to the U.S. market, provided they abide by the law, support human rights, promote poverty reduction, and do not engage in corrupt activities.

The U.S. Senate recently passed the Trade Preferences Extension Act of 2015 (TPEA), as well as the Trade Facilitation and Trade Enforcement Act of 2015, and approved a motion to start debating trade promotion authority. The TPEA includes a 10-year renewal of AGOA. Now it needs approval from the U.S. House of Representatives to move forward.

"Our members tell us they want to continue sourcing from the AGOA region, and even place more orders," explains Julia K. Hughes, president of the United States Fashion Industry Association, a Washington, D.C. lobby that represents the fashion industry. "But without duty-free treatment, sourcing apparel from the region is cost-prohibitive.

"Since companies plan their sourcing at least six to 12 months in advance, many companies are planning their final orders from the AGOA region, or have already left because they cannot afford the cost increase that would result if AGOA is not renewed in time," she adds.

A 10-year renewal is important because it provides adequate time for Africa's burgeoning textile industry to make the necessary investments in infrastructure and resources to keep pace with demand. It also creates a foundation for further trade agreements between the United States and Africa.

The Internet of Things (IoT) is taking industry by storm. A future where integrated machines and products automatically communicate with one another holds few bounds. But it also raises fresh concerns about how supply chains will ramp up to meet demand. IoT requires more sophisticated components – chipsets – which places greater pressure on supply sources. Intel knows this well.

Intel expects 50 billion devices to be connected with each other by 2020, compared to 15 billion today. The Santa Clara, Calif.-based global technology company recently hinted at its strategy. Intel has created an IoT Solutions Group to help integrate hardware, software, services, and platforms. It’s looking to integrate supply chain partners and create an IoT ecosystem. China is the likely offshore target, according to Taiwanese semiconductor trade publication DigiTimes.

China’s low-cost, efficient manufacturing pedigree, and growing middle-class consumption, make it an ideal location for production. As the country’s economy matures, and costs rise, manufacturing is moving upstream to more value-added activities. The “red supply chain” as it has been termed, is a major threat to high-tech manufacturing countries such as Taiwan. Intel is keeping its options open. The company has also courted Indian states to facilitate digitalization efforts – a move that no doubt will help spur demand. All-India household PC penetration hovers around 17 percent, and Internet penetration is at 15 percent, which indicates ample room for growth.