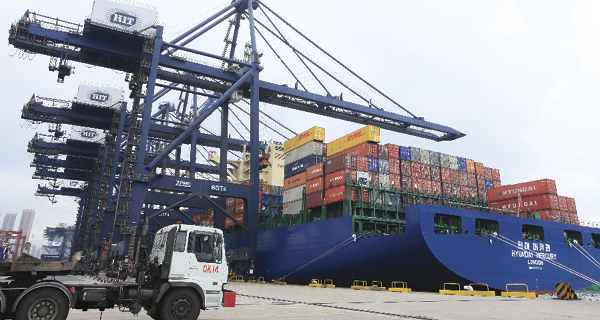 Expanding internationally might seem like a no-brainer in a world where consumers are connected to global businesses through the internet and myriad global shipping options. Yet, a number of obstacles keep companies from taking the plunge into international waters, or from expanding existing global operations.

Many shippers say that the current trade climate makes global business much too difficult, according to a new DHL survey.

"While we did not expect the results to show that almost half of our customers find customs and confusing trade laws to be a major hurdle to international growth, we understand that international trade is a complex process," says Eugene Laney, head of international trade affairs for DHL Express. "Customs authorities should come together to align their regulations. DHL is advocating for countries to provide better access to trade rules so everyone can see where the rules stand, and pushing for higher de minimis in other countries.

"Trade facilitation improvements such as a single-window system would also increase efficiency for traders," he adds.

In addition to convoluted customs and trade laws, nearly 60 percent of respondents express concerns over how Brexit will affect them. With so much still undecided, it isn't clear how Britain's exit from the European Union will impact trade between the two entities, or with the rest of the world.

"In the short term, we expect the vote to be rather neutral with no impact on the day-to-day operating business," says Laney. "The mid- to long-term impact will be very dependent on further political reactions—such as access to a single market and trade agreements—and resulting macroeconomic reactions. It is clear that the UK is to remain an important part of global GDP and trade, so we will make any adaptions to our business if needed."

DHL also asked about markets where their customers expect to expand in the future. Despite recent economic struggles, respondents chose China as the top market for expansion.

"With the growth of e-commerce, trading with China has become easier than ever," says Laney. "China is still growing in terms of manufacturing, so we are seeing that growth inbound because U.S. consumers still want to buy from Asia. Additionally, the growth of the Chinese middle class is helping make U.S.-China shipping routes more two-sided."

The survey results also show significant interest in India. "For companies considering doing business in emerging markets, India offers significant promise," Laney says. "There are a number of reasons why the country's economic potential has risen, but one leading factor is the emergence of business-oriented Prime Minister Narendra Modi. Modi has embarked on plans to boost foreign direct investment (FDI), combat corruption in the public sector, and promote manufacturing in India as a central economic driver. His 'Make in India' initiative is at the center of the economic movement, and it has already achieved success.

"In May 2015, for instance, data showed a 56-percent increase in FDI in the five months after 'Make in India' was launched," Laney adds. "The country's GDP growth surpassed that of China in July through September of last year, and is predicted to reach 7.8 percent in 2016. India's large population and growing manufacturing focus present many opportunities for U.S. businesses."

Canada: A Friend with Trade Benefits

Even with regulatory and compliance hurdles boosting cross-border trade costs, Canadian businesses expect to increase trade with the United States in the near future, according to a survey of 531 companies by Economist Intelligence Unit and American Express.

"U.S.-Canadian trade is among the most valuable in the world," says Paul Roman, vice president and general manager, global commercial payments, American Express Canada. "The results show there are some issues to be looked at, including access to trade finance and infrastructure, but it is positive to see optimism among a majority of Canadian firms that their trade with the United States will increase."

Despite the optimism, however, the survey reveals challenges that exist for Canadian businesses looking to trade south of the border. Seventy-two percent of Canadian companies surveyed claim an increase in business costs due to regulatory and compliance issues over the past year, with 42 percent of that number seeing an increase of more than 10 percent.

In addition, 46 percent of Canadian businesses claim to struggle when trying to access trade financing, and 46 percent also consider trade-related transportation infrastructure to be a challenge. 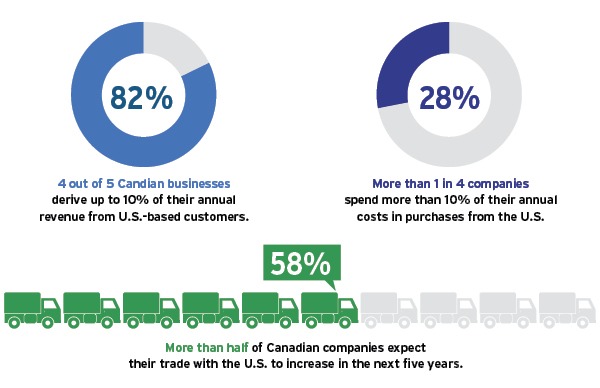 The decline of Hanjin Shipping continued in late October 2016 as it received approval from the Seoul Central District Court to begin winding down its European operation. Hanjin operates 10 offices in Europe, including a regional headquarters in Germany, all of which have begun the process of closing.

Like it did with its Asia-U.S. assets and container terminal at the Port of Long Beach, Hanjin reached out to competitors in the European market in an attempt to sell off as much as possible, including stakes in many global container terminals and at least five containerships. Fellow South Korean shipping line Hyundai Merchant Marine is expected to pick up at least some of the assets. But, as with Hanjin's attempts sell off belongings in other parts of the world, it will be difficult to convince competitors to pick up additional equipment and real estate in global areas where they already face overcapacity and low freight rates.

In related news, the majority of cargo left trapped in Hanjin vessels that were stranded at sea or seized in ports has been unloaded. As such, the effect of the company's financial troubles on peak season sales across the globe should be minimal.