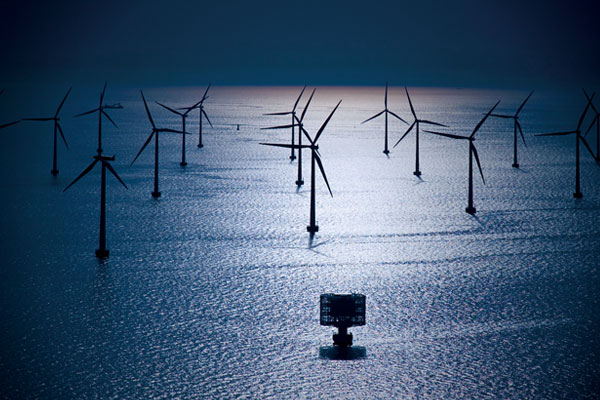 Efforts to build offshore wind farms in Northern Europe are meeting gale force resistance because of supply chain limitations, according to a recent report by the Wall Street Journal. The United Kingdom, Denmark, the Netherlands, and Belgium are among the countries seeking to expand capacity to meet European Union mandates for more renewable energy sources. The problem? Manufacturers aren’t capable of matching parts and components to growing demand.

Wind turbine companies have balked at adding production capacity until they have firm orders from utilities and developers, many of whom are unwilling to sign big contracts because of the considerable costs involved in offshore installations. Meeting the forecasts and reducing costs will only come with competition from many suppliers and mass production — and to date there are not enough customers or orders to stimulate new manufacturing.

Still, some developers aren’t waiting for prices to drop. They’re securing equipment by placing bulk orders or buying stakes in the industry’s leading suppliers. Experts predict that Europe’s blowing pains could eventually touch down in the United States, creating a major stopgap in the development of wind farms and jobs.

Russia’s State Scientific Center, in cooperation with airplane manufacturer Beriev, has begun developing a new super-heavy cargo plane titled Project 2500. The prototype is expected to be complete in 15 to 20 years and will be able to carry out non-stop transatlantic flights with large cargo volumes.

“Earlier, it was a dream. But now we have all the required technologies for its implementation,” says Victor Kobzev, CEO of Beriev.

Despite the global recession and Russia’s own economic doldrums, the country’s cargo transport market is growing three to five percent per year, and there is already increasing urgency for new and better cargo aircraft. Kobzev expects the new airplane will help Russian industry target bulk air cargo shipments as well as oversized freight traditionally moved via ocean.

Despite explosive growth in its real estate and industrial sectors, the United Arab Emirates (UAE) has always been dogged by its dependence on oil trade and revenue. Economic diversification has been an ongoing challenge and the country looks to be making headway in one niche area — rice.

The UAE was the top global re-exporter of rice between 2005 and 2009, according to a recent study conducted by the Ministry of Foreign Trade. The country attained the top spot largely due to its geographical positioning as a pivot point between production, export, and consumption areas in Southeast Asia and the rest of the world. UAE’s competitive logistics capabilities and accommodating customs procedures have helped it build status in the rice trade.

The UAE is continuing efforts to raise its profile as a commercial logistics hub in non-oil trade by investing vast financial resources — around $52 billion over the past decade — in the storage, transportation, and communications sectors, reports the study.

Brazil’s relatively steady market growth in a suppressed global economy has placed it squarely in the crosshairs of enterprising businesses exploring new markets to grow into. With demand rising, the challenge now becomes reducing the total landed costs of importing goods into the country.

In a recent study of supply chain executives in Brazil, conducted by BDP International, 70 percent of respondents cite costs — including purchase price, freight transportation, insurance, customs duties, and taxes — as a deterrent to faster growth.

These companies also place higher priority on reducing internal overhead as they turn to third-party logistics providers for better control of inbound shipments and compliance with complex import regulations that impede cargo clearance and incur punitive penalties for documentation irregularities.

Europe ranks as China’s fastest-growing export market, with outflow to the EU reaching US $236.2 billion in 2009 — 20 percent of China’s total overseas shipments, according to the Chinese General Administration of Customs. In an effort to capitalize on this growth, FedEx Express extended pickup time by two hours for all international low-value shipments from Shanghai, Suzhou, Hangzhou, Ningbo, and Shaoxing, to help meet growing business demands.

No Hangups Down Under

Australia’s textile and apparel industry is getting a supply chain design cue from Luxembourg-based logistics service provider Logwin. The 3PL, which specializes in air and ocean freight and logistics services targeting the fashion industry, has introduced its AirTextainer solution into the Australian market.

The multimodal hanging garment container is optimized for air, ocean, road, and rail transport, ensuring textiles move quickly and safely from production to the point of sale. Consequently, garments arrive at resale locations in pristine condition, eliminating the need for pressing, steaming, and waste disposal, reducing total logistics costs by as much as 40 percent and shortening lead times.

Logwin operates the largest European fashion logistics network and delivers more than 300 million hanging garments each year. The AirTextainer has been in worldwide use for decades and modified over the past 10 years to reflect current industry standards. The 3PL is focusing on the Australia market as demand builds for both international and Australian brands that are manufactured in Asia. Logwin is now leveraging its experience in the global marketplace to develop business in Australia as well as southern Africa and Latin America.