New Pallet Program Better by Half 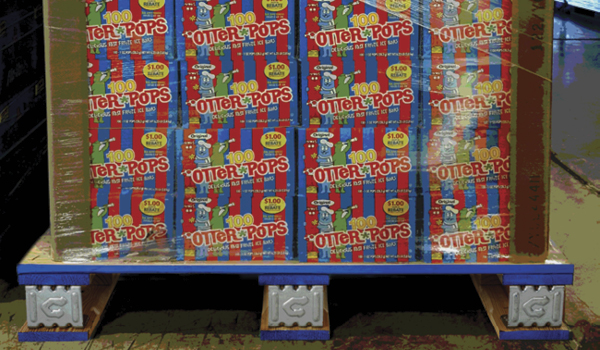 But the only half-pallets Jel Sert could buy at the time were of uneven quality and caused a lot of product damage in transit.

Then CHEP, Jel Sert's preferred pallet provider, developed a new half-pallet and offered it to Jel Sert as part of its pallet pooling program. This new solution saved money for Jel Sert and cut complaints about product damage to zero.

Founded in 1926, Jel Sert is a third-generation family business based in West Chicago, Illinois. From its first gelatin-based dessert, the company's product line has expanded to include treats such as MONDO Squeezers, Royal and My-T-Fine puddings, and Wyler's beverages and freeze pops.

Jel Sert makes all of its products in West Chicago and distributes to retailers across the United States from three distribution centers in that suburb.

The company loads product onto about 300,000 pallets annually, says Mike Martinez, vice president of customer service and distribution at Jel Sert. The majority of those platforms are 48-inch by 40-inch pallets provided by CHEP, which is based in Alpharetta, Georgia.

Retailers started asking for "promotions"—mixed product assortments on half-pallets, used as free-standing displays—because they wanted to more efficiently use their selling space. "Retailers want to be able to display more SKUs in a smaller footprint in their stores," Martinez says.

Martinez mentioned this request at a monthly meeting with his sales representative from CHEP. Unfortunately, at that time, the pallet supplier didn't make a half-pallet. So Jel Sert found two companies that could build half-pallets to the company's specifications, using recycled materials.

Those recycled pallets weren't cheap, Martinez says. But the biggest problem they posed was that the top deck board—the upper surface, on which product sits—was inconsistent in coverage. The boards that made up the top deck had wider spaces between them on some pallets than on others.

"Inconsistent quality on pallets can contribute to product damage," Martinez says. For example, if the spaces are too wide, cartons may sag while in transit. "Our customers were complaining," he adds.

Compounding the problem was the fact that no single supplier could build enough half-pallets to meet Jel Sert's need. "We had to go to a second supplier, and those inconsistencies just doubled," Martinez says.

The relationship also created waste. Jel Sert bought pallets from the two suppliers, shipped them to retailers, and never saw them again. So Jel Sert had to keep ordering more and more pallets.

Jel Sert was not the only CHEP customer coming under pressure to provide half-pallets for store promotions. "Stores are shrinking," says Brandon D'Emidio, director of product management and innovation at CHEP North America. "Retailers want to have additional SKUs in a shrinking store. Products on 'promotions' continue to grow, while labor costs continue to rise." Given those trends, CHEP started to explore how to help customers with store fulfillment strategies, including a 40-inch by 24-inch half-pallet.

As a global company, CHEP provides pallets, containers, and reusable plastic crates through a pooling network that delivers conveyances for loading, picks them up when they're unloaded, performs maintenance and repairs, and then puts them back in circulation. At the time its North American business was laying plans to add half-pallets to its portfolio, CHEP already provided similar units in Australia and Europe. The company applied lessons learned in those markets to the new half-pallets, D'Emidio says.

For example, CHEP made sure to provide plenty of top deck coverage to eliminate the risk of damage. It also chose a novel strategy for binding the pallet layers together. "Our pallet has metal brackets instead of wooden blocks," D'Emidio says. That allows a forklift or pallet jack to take hold of the pallet on the 24-inch side as well as on the 40-inch side, making it easier to maneuver the unit through narrow aisles or doors.

The CHEP pallet also features three runners at the bottom, rather than a full bottom deck, providing ease and speed when lifting it on the 40-inch side.

"Just picking up a custom-sized pallet can be difficult," says Martinez. "Engineering contributes to a pallet that will be damaged less."

In addition, CHEP designed its half-pallet to provide 87-percent coverage on the top deck. "And it has a lot of coverage around the perimeter, where the outsides of the cases will be," D'Emidio says. This improved support is another design feature that reduces product damage.

CHEP also made a special effort to enforce standards in the platform's construction. "When customers order a CHEP platform for their promotions, they know what they're going to get," D'Emidio says. The same goes for the retailers who receive the promotions. "That standardization helps to drive efficiency throughout the supply chain,"he adds.

CHEP was ready to start delivering the new half-pallets in 2014, but Jel Sert wasn't ready to take them just yet. The company was in the midst of its peak season, which runs from roughly March through August. "To execute a program of this magnitude in the middle of busy season would be difficult," Martinez says. So CHEP waited until 2015 to make the transition to the new half-pallets.

Before committing to switch, Jel Sert had to verify that CHEP's solution represented an improvement. "For us, the question was, 'Can you meet our demand with your supply? Can you get to a pricing point that will make it favorable for Jel Sert, versus the old way we were doing it?'" Martinez says.

The company started small, with one major retail customer. "We did a trial load, just to get customer feedback," Martinez says. "It was positive, and that was all we needed to hear." Jel Sert then made the switch to CHEP's half-pallets for all its store promotions.

That was the end of product damage on half-pallets. Jel Sert has never tracked data on customer complaints about pallets, but Martinez estimates that in the past, the company received about 10 per season. "Since we've been on the CHEP pallet program, we've received zero," he says.

A nice side benefit is that using CHEP's pooled pallets, rather than the custom-built, single-use pallets, has helped Jel Sert cut carbon emissions in its supply chain. "We perform lifecycle analyses on the pallets to determine our environmental footprint, and we benchmark that against the recycled pallet," D'Emidio says. "Since companies are able to reuse our pallets, the carbon footprint is a lot smaller."

By adopting the pooled half-pallets, Jel Sert avoids releasing 100,000 pounds of carbon dioxide into the atmosphere each year and takes nearly 130,000 pounds out of the solid waste stream, according to CHEP.

"A lot of recycled half-pallets are used and shipped and never seen again," D'Emidio says. "They might end up in a landfill, or who knows where. Ours can continue to be reused."

Since Jel Sert adopted the new half-pallets, other manufacturers have embraced them as well. "We continue to see strong growth for this platform in both the United States and Canada," D'Emidio says.

Jel Sert has no current plans to expand its use of CHEP's
half-pallet. But Martinez is happy with the solution as it stands. "We had a need in the market," he says, "and CHEP helped solve it."