Intermodal: More Than Roads and Rails 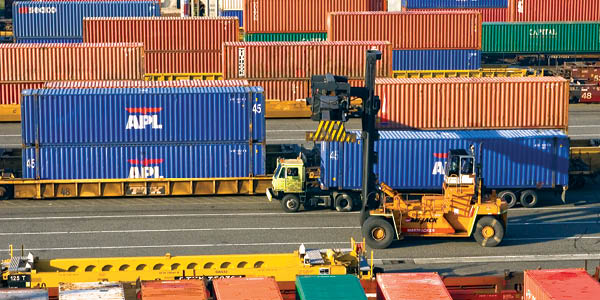 "Intermodal freight services are the fastest growing segment of the rail business," says Holly Arthur, a spokesperson for the Association of American Railroads. "More than 140,000 miles comprise the freight railway system in North America, creating many growth opportunities."

When siting a new manufacturing or distribution facility, many companies are willing to trade proximity to large cities and busy ports for access to rail transportation and highways. For example, a business serving the Chicago market might look to surrounding states with good intermodal connections.

"The Chicago area is unique because of the volume of traffic that flows through," says Jim Kramer, president of the Intermodal Association of Chicago. "But just as important for intermodal transportation is the location of rail facilities in relation to the interstate highway network and secondary truck roads. Access to multiple modes drives development in areas outside the metropolitan region.

"In addition, companies need logistics services that complement their intermodal activity," he notes.

Some businesses seeking a Midwestern presence find that Indiana provides the access they need. "Rail, with or without an intermodal terminal, is enhanced by other transportation modes," says Harold Gutzwiller, director of economic development for Bloomington, Ind.-based electric utility Hoosier Energy. "That's why Indiana always fares well with transportation, distribution, and logistics companies."

At the Heart of Industry

For businesses serving the entire United States, locating in the center of the country may be the best strategy for reaching far-flung markets. Nebraska, for example, provides easy access to an extensive intermodal transportation network.

"Geographically, Nebraska is center stage to regional markets," says Ken Lemke, economist, Nebraska Public Power District (NPPD). "Interstate Highway 80, the most traveled east-west transcontinental route of the interstate highway system, offers 482 miles of quick access to every location in the nation. Through Nebraska's roadways, goods delivered by truck reach 26 percent of the U.S. population in just one day. Within two days, that percentage skyrockets to 91 percent."

The network of assistance available through professional organizations also serves Nebraska's logistics community well. One example is the Nebraska Trucking Association (NTA), the statewide trade association for commercial truck and bus operators, and affiliated businesses. It is a not-for-profit association governed by a board of directors.

Nebraska is home to several of the nation's leading truck transportation companies, including Adams Trucking, Crete Carrier Corporation, and Werner Enterprises. More than 13,500 trucking companies operate out of the state.

Rail Gets on Board

Rail services are also well-represented in Nebraska, where 10 freight railroads operate more than 3,200 miles of track.

"Because of these main rail centers, no major U.S. city is more than five days away from Nebraska by train," he notes.

The rail companies are betting heavily on Nebraska. BNSF recently announced plans to spend an estimated $202 million on maintenance and expansion projects in Nebraska in 2012. Last year, Union Pacific spent $224 million on capital projects in the state.

Nebraska's neighbor states also offer considerable logistics advantages. The already advantageous Kansas City area is set to take another giant leap forward in the logistics arena with the introduction of the I-35 Logistics Park in Olathe, Kansas.

"Kansas City is the country's absolute center geographically," says Dan Jensen, principal of Kessinger/Hunter & Co., the commercial real estate company introducing the new logistics park. "The area is well-situated, and all the major rail providers operate here. Shippers can reach 80 percent of the continental United States in two days by ground; in three days, they can almost cover North America."

I-35 Logistics Park is being developed to leverage those advantages. Upon its completion in 2013, the park will include three state-of-the-art bulk distribution facilities encompassing nearly three million square feet.

The site, just one mile from a new I-35 interchange, capitalizes on Kansas City's already impressive rail intermodal credentials. KC SmartPort, the authority on logistics opportunities in the 18-county, bi-state Kansas City region, cites several key components that make the region an excellent hub for transportation and logistics operations.

The area is the largest rail center in the United States by tonnage, and the heart of a rail corridor spanning coast-to-coast across the United States and extending from Canada to Mexico. Kansas City offers more than 10,000 acres of Foreign Trade Zone space—more than any other U.S. city. It is located at the intersection of three of the nation's major interstate highways (I-35, I-70, I-29) and soon, a fourth, I-49.

The Kansas City International Airport moves more air cargo each year than any air center in a six-state region, and the area is located on the largest navigable inland waterway, the Missouri-Mississippi River system.

"The combination of water and rail is one of the most cost-effective ways to move product," Jensen notes. "I-35 Logistics Park's location is a real plus."

"A combination of strengths make a great rail intermodal site," says Chad E. Ford, vice president for business development of Ford Storage & Moving, which operates logistics, dry van, and drayage services in the Kansas City and Omaha markets. With warehouses and terminals in both locations, the company offers more than 750,000 square feet of space.

Located at the intersection of two of the nation's busiest interstate highways—I-40 and I-77—the area features over-the-road connectivity to major markets on the East Coast and beyond.

"That connectivity is enhanced by our industrial properties' proximity to the highway system," says Michael Smith, executive director of Statesville Regional Development. "Most local business parks are within four miles of an interstate exit."

Highways are vital to shippers in the Statesville region, but rail links are at the heart of the transportation network. "The area is serviced by Norfolk Southern and local shortline Alexander Railroad," Smith says. "With a network of rail lines and spurs covering the Statesville region, many of our available properties are rail-ready.

"Planned rail-access developments will provide strong rail connectivity in the region," he adds.

Help is readily available to ensure that businesses throughout the state make the most of North Carolina's offerings.

ElectriCities is a not-for-profit service organization representing more than 70 cities, towns, and universities that own electric-distribution systems. Using ElectriCities as an introduction to North Carolina, site selection managers have a turnkey information source. "They find all the information they need in one place," says Daniels. "The process is fast, easy, and confidential."

Important as they are, location and infrastructure are just two parts of the intermodal picture. Transportation access and top-notch facilities are useless without a qualified labor pool. That's one of Nebraska's greatest advantages.

"Nebraskans take pride in the quality of their work, and the workforce consists of productive, dependable, educated, and well-trained individuals who care about what they do," Lemke says. "This contributes to high productivity and success rates, and low absenteeism and turnover."

Nebraska maintains a four-percent unemployment rate, less than half of the current nationwide unemployment rate of 8.2 percent. Unemployment insurance and worker's compensation costs also are lower than the national average.

Indiana also provides employers a strong workforce. "Hoosiers are some of the most productive employees in the United States," notes Gutzwiller. "They are well-trained and well-educated, and they understand the need to work cooperatively.

"With a manufacturing and agriculture legacy, our employees expect to provide top-quality performance every day," he adds.

A skilled workforce needs tools at its disposal to do the job properly. Those tools often demand power.

Access to affordable power gives Nebraska yet another edge as an intermodal hub. NPPD, the state's largest electric utility, uses a diverse mix of generating facilities—such as nuclear, coal, gas, oil, hydro, and renewable energy—to meet the needs of its customers.

"In 2011, NPPD relied on non-carbon-emitting resources for more than 40 percent of its overall energy mix supplied to customers," Lemke notes. "Additionally, more than 5,000 miles of high-voltage transmission lines make up the NPPD electrical grid system, which delivers power reliably to approximately one million Nebraskans."

As a member of the Southwest Power Pool, NPPD has the advantage of selling its excess power into the regional marketplace. Additionally, Nebraska's low electric rates are a function of its unique status as the only completely public power state.

The availability, reliability, and affordability of public power also contribute to North Carolina's logistical advantages. It's no coincidence that some of the state's most dynamic growth has occurred in public power communities. Any power-intensive industry will find significant advantages in the region.

"Through our member/owner distribution cooperatives, Hoosier Energy is able to provide reliable, low-cost power via efficiently operated facilities," says Gutzwiller. "Users receive the lowest-cost product because Hoosier Energy, as a cooperative, operates just to cover costs, not to earn a profit for investors."

For information on featuring your region in an Economic Development Supplement, contact James O. Armstrong at 314-984-9007 or jim@inboundlogistics.com.