Keeping Drivers and the Community Safe During the Pandemic 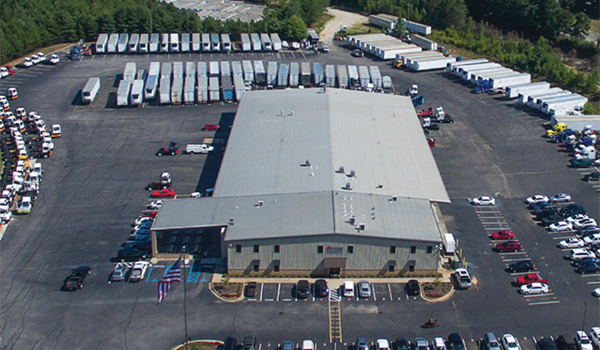 Syfan Logistics changed shipment pickup, verification, and receiving procedures for its truck drivers to ensure their safety, protecting their health and that of the community.

When the COVID-19 crisis began earlier this year, it was imperative for Syfan Logistics—an essential provider in the delivery of food, medicine, and other critical supplies—to protect its drivers and community.

To ensure this happened (and continues to happen), Syfan implemented a few simple, common-sense practices in the everyday shipping and receiving of goods, from the pickup point through final delivery.

When a truck driver arrives at a food facility to pick up a shipment, he or she typically has two primary interactions. First, the driver must pass through a security gate with proper authorization. Typically, this does not involve the driver leaving the truck, but it sometimes happens.

Next, the driver enters the facility's shipping office. Often, the office is crowded with other drivers from multiple regions and states who are verifying their loads and receiving their load or unload instructions. There are also multiple tasks that usually involve several more points of contact, such as filling out forms and sealing trailers to ensure the safety of food and other shipments.

On the other end, similar interactions occur with the receiving of goods at a warehouse or distribution center.

Across the United States, thousands of these deliveries happen every day—following protocols that have been entrenched as standard practice as far back as the early 1980s.

Syfan Logistics advised its drivers, when possible, to simply stay in their trucks—whether they are picking up a load or delivering it to the receiver. It is a solution to driver and customer safety that Syfan Logistics has provided to several customers.

The whole process of following verification and safety rules on each end of the shipment can still be done easily without close personal contact. Some standard practices, such as checking proper sealing of the trailer, can be done by the driver just outside the shipper's or receiver's location to avoid another potential exposure.

Syfan has some customers whose operation procedures necessitate drivers leaving their trucks during delivery or pickup. In those situations, the Syfan drivers don masks and gloves before leaving the truck, and follow CDC social-distancing safety suggestions while interacting with the customer.

Executive Vice President Steve Syfan took the initiative at the state and federal level to promote truck driver safety, and was recognized in an article by The Atlanta Journal-Constitution for his efforts.

Changing these existing over-the-road shipping protocols was not costly or over-burdensome. Syfan communicated with its drivers and customers that the intent was to protect the health of everyone involved in the shipment of food and supplies, including the end consumer. All it takes is one sick driver or employee to infect and shut down an entire plant, so this simple safety practice also protects the financial bottom line.

Steve Syfan further communicated his company's safety message in a podcast interview conducted by Inbound Logistics. His hope was to spread his company's safety practices throughout the shipping industry. With everyone following along in their own small roles, Syfan reasoned that it adds up to eventually beating the pandemic and keeping America's economy running.