Contrary to public perception, U.S. manufacturing and logistics experienced dramatic growth over the past generation, says a study by the Ball State Center for Business and Economic Research (CBER) and Conexus Indiana.

U.S. manufacturing production grew 11 percent since the 2000-2003 dot.com bust and ensuing economic turbulence of the 2001 and 2007-2009 recessions, reports Manufacturing and Logistics: A Generation of Volatility & Growth.

"According to folklore, this has been a terrible generation for manufacturing and those who move goods," says CBER Director Michael Hicks. "That isn't what the data says. Indeed, 2015 was a record manufacturing production year in inflation-adjusted dollars. While 2016 fell just short with some weakness in the first and second quarter, 2017 looks to be a new record year."

Hicks attributes most of the confusion about manufacturing and logistics to declining employment over the past generation.

Three factors contribute to a decline in employment: the workforce is better educated and trained, increasing productivity; mechanization has displaced some workers; and improved processes, such as Lean Six Sigma and other management methods, have increased manufacturing production, according to the study.

Since peak manufacturing employment in 1979, the United States has lost approximately 7.5 million manufacturing jobs, but gained more than 9 million jobs in trade, transportation and utilities, the broadest measure of the logistics sector.

"Trade and productivity growth shifts job opportunities to other places and other sectors even as employment grows," Hicks says. "We are at peak U.S. employment right now."

Total GDP for the logistics sector saw only about half the proportional decline than manufacturing over the Great Recession. This graph illustrates the smaller dip in real GDP. 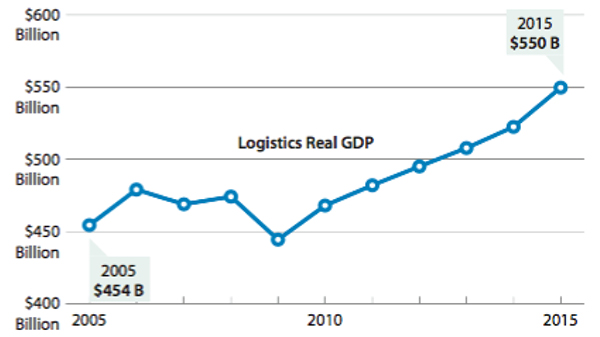 Source: BEA, adjusted for inflation with the GDP Deflator