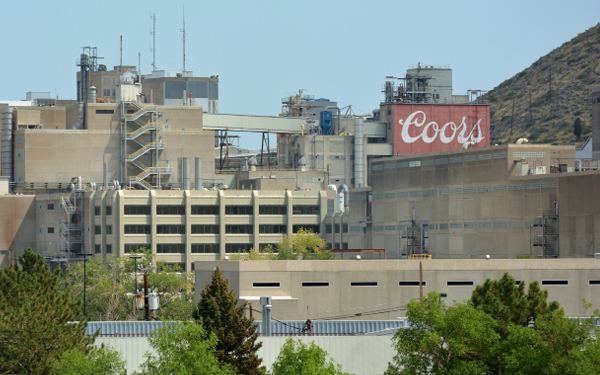 Take a look at the loading area of Molson Coors Beverage Company's breweries, and the word "complexity" comes to mind. It's not just the vast quantity of beer and beverage products moving out of its seven North American production facilities that turns up the volume on logistics and supply chain operations. It's also the frequency of trucks being loaded and the pace of activity all week long—including weekends—that add to the challenge of delivering products to its 700 distributors on time.

THE CUSTOMER
Molson Coors Beverage Company (formerly MillerCoors), one of the world's largest brewers with approximately $10.6 billion in 2019 net sales.

Molson Coors (formerly MillerCoors), which recently moved its headquarters from Denver to Chicago, has been working for many years with Echo Global Logistics Inc., a third-party logistics provider (3PL) based in Chicago, to streamline its last supply chain leg and improve its transportation activities.

The company's U.S. operations include seven brewery campuses in California, Colorado, Georgia, Ohio, Texas, Virginia, and Wisconsin. The company generally concentrates its shipping density within a 500-mile radius of these sites.

"We try to ship in and orbit around each one of those locations," says Jake Kilgore, transportation logistics manager. "It's not always possible, because not every brewery makes every product in our portfolio.

"In those cases, we do long-distance interplant transfers," he says. "We ship products from one brewery to another to marry up with another product, and then fulfill orders to customers from that location."

About 90% to 92% of this volume is short-haul road shipments made by trucks or vans, with the remaining long-distance hauls moving intermodal by boxcar and rail.

Like other large companies, one of Molson Coors's biggest transportation challenges is managing carriers and transportation rates. Since the company doesn't have its own fleet of trucks, it relies on asset carriers, broker carriers and Echo to smooth out these pieces. Kilgore expects that these areas will continue to need tweaking as the company begins to rationalize its existing SKU base and volumes shift as it expands beyond beer into other beverage categories.

"Our main issue is battling market volatility" he says. "One year, it could be in a shipper's favor, and the next year, it's in the carrier's favor. So rates go up and down, and you don't have that steady three to five years you can budget for.

"Our big challenge was to find a partner that could ebb and flow with us and also think long-term while meeting market rates and meeting our service expectations," Kilgore adds.

Another pain point was having enough transportation coverage over the weekend and finding a solutions provider who could accommodate those requirements.

"One critical issue was being able to tell our partners that our business has changed," Kilgore says. "We're no longer just a Monday through Friday operation. We're truly going at a pace of seven days a week, and we are heavy on the weekends.

"We had to tell prospective solutions providers, 'If you want to partner with us, we will need some type of solution for the weekend and off hours,'" he adds.

To solve some of these issues, Molson Coors turned to Echo in 2013. Echo provides freight brokerage and managed transportation solutions and works with a network of 50,000 carriers.

"We were in a place of need," Kilgore recalls. "Echo had done some transactional moves for us and they knocked it out of the park. We stepped up our work with them, and gave them some new projects, new lanes, and new volumes.

"We slowly grew with them to where we are today, which is a significant relationship," he says.

Since 2013, Molson Coors and Echo's volume has doubled in size and continues to grow year over year. Echo's solutions, specifically its EchoShip web portal built on the EchoAccelerator platform, provide Molson Coors with real-time visibility information about loads, documents, shipment status, invoices, and other related data.

More importantly, however, was Echo's strategic approach to meeting Molson Coors' demands. Creating a weekend team, adding capacity as needed, adhering to proposed rates, and being attentive on the follow-through were other pieces that helped expand the relationship.

"This is part of the comprehensive solution we've brought to the table," he adds. "As companies continue to grow, they've got to keep improving because there's a new challenge every year."

Flexibility also proved to be a critical element, particularly with the management of drop trailers, where a truck trailer is left at a location, loaded, and then picked up later. Some Molson Coors facilities use a drop-trailer method as a way to offset production issues.

For example, if a truck was supposed to load on a particular day but the line goes down, having the trailer in the yard gives the company flexibility to reschedule the load later in the day or the next day. This can sometimes cause difficulties for logistics partners because of the inherent complexity of scheduling and coordinating drop-off and pickup times, but Echo has been able to manage that dynamic.

"Working with drop trailers is more challenging," says Andy Hafertepe, Echo's division vice president. "We've had to roll up our sleeves to manage that aspect of the business.

"But we have managed to take over a lot more of that freight in the past two years, and that has been a big part of our growth with Molson Coors," he adds.

And, of course, creating an active problem-solving feedback loop has turned out to be essential.

"If something happens, Echo says, 'We heard you, we are working on it, we will get you something tomorrow.' And then there is a solution tomorrow," Kilgore adds.

The long-term relationship has led to many gradual wins during the past several years. One consistent milestone is Molson Coors' on-time delivery rate, which is now running at about 97.9%.

Molson Coors has also reduced its weekly carryovers—loads that were supposed to ship during a particular week, but for whatever reason get delayed and are carried over to the following week—by 10% to 20% because of Echo's weekend coverage.

Molson Coors wanted to better maneuver through market volatility and improve its weekend coverage for the last leg of its supply chain—shipping from its seven North American brewery sites to its 700 distributors.

Echo Global Logistics technology solutions EchoDrive and EchoAccelerator, plus the strategic added-on capabilities to manage weekend transportation needs and flexibility for activities such as drop-trailer loading and pickup.