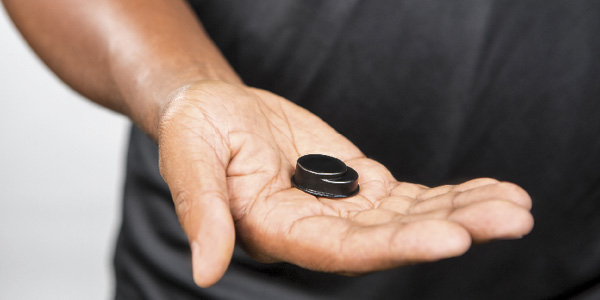 A small RFID microchip on each shoulder goes unnoticed by players, but allows the NFL to track speed, direction, and distance, among other stats, and report that information directly to fans.

The NFL couldn't afford a Hail Mary to improve statistics reporting capabilities. So it kicked off a well-tested logistics technology to help gather the data that fans demand.

If there's one thing diehard football fans love, it's statistics. How far was that run? How many yards on that throw? Pass completion ratios, pass reception ratios, yards-per-catch, first downs, and point spreads are just the beginning. And thanks to a technology born in the world of logistics, a few more yards have been added to the list of available stats.

When it comes to crunching numbers, the National Football League (NFL) is an old pro. The NFL has been reporting stats in some way or another since its founding in 1920, and today tracks statistics for 256 American football games every year, across 31 different full-time stadiums, for more than 1,600 players. That's no small feat.

But there are always more things to measure, more data to capture, and more efficient ways to capture it. To date, NFL statisticians have devoted countless intensive man-hours to manually measure distances on the field, or review photographs and recorded video, in order to compile stats. While those methods still have their uses, many data points simply couldn't be captured by traditional means.

So the NFL began to explore other options to enhance its existing data collection methods. "Initially, we were looking for ways to gather more information about our game," says Matt Swensson, senior director of emerging products and technology for the NFL. "We thought it would be great to have more data around the game in addition to the standard statistics we capture."

After exploring myriad camera-based optical solutions that didn't go in depth enough, the NFL began looking at tracking and location solutions. Going down this path led them to Zebra Technologies, a provider of tracking solutions for industries ranging from manufacturing, to transportation, to healthcare. At the same time, Zebra was looking to expand out of its comfort zone into some new sectors. A partnership with the NFL gave Zebra the chance to show what its technology could do for the sports world.

"We had several criteria going into the vendor selection process," says Swensson. "For example, the solution had to be easy to deal with week in and week out. We didn't want complications putting tracking devices on players' shoulder pads. And we had to be able to enhance the fan experience without impacting the player in any way."

"The NFL took a long look at the available technologies, including GPS, passive and active RFID, and beacons," says Jill Stelfox, vice president and general manager of location solutions for Zebra Technologies. "Each solution has its pros and cons. The NFL evaluated the kind of technology it was looking for, and came up with active Real-Time Locating Systems (RTLS)."

RTLS is an active RFID solution that uses a wireless signal to track the exact location of a tagged piece of equipment. Through a series of receivers, the transponder's location can be constantly monitored.

Zebra and the NFL explored using the same technology typically employed to track assets in a distribution center or warehouse to track players on the field. "We deploy this kind of solution for tracking assets, people, and transactions worldwide," says Stelfox. "Sports are just another use for this technology."

The concept of using RFID to track athletes was new. While the NFL, National Basketball Association, and other major sports leagues employ a number of optical solutions to gather statistics, putting tracking chips on players hadn't been tried before. Zebra and the NFL's trial resulted in Zebra's MotionWorks Sports Tracking solution. "We talked to many different companies and Zebra is the only one that was able to deliver on all fronts," says Swensson.

In each of the NFL's 31 stadiums, Zebra hung between 20 and 22 receivers to collect data, placing the receivers in consistent locations at each stadium to help with troubleshooting. "We've installed in so many warehouses and yards that we understand the importance of a consistent deployment," Stelfox says. "We support that remotely, so we know when somebody calls in and says receiver one is down, the person sitting in California, 3,000 miles away from New York's MetLife Stadium, can visualize exactly where that is."

Each player has an RTLS tag mounted in his shoulder pads. The tag allows for movement tracking, whether it's forward yards, or sideways motion. This happens nearly instantaneously. "The time between a movement happening on the field and the information being available in the computer is about 120 milliseconds," Stelfox says. "Imagine we've tagged Reggie Bush, who starts running up field. The time from when he starts running to when we can show his miles per hour on the TV screen is less than half a second. That's about 10 times faster than video."

Much in the same way information is reported in high-volume, fast-paced shipping operations, this sort of speed enhances the NFL's ability to present fans and analysts with statistics both in the stadium and on the TV networks. The implications of this data for future changes in fantasy leagues alone are drastic, but as it turns out, the value of the information gathered goes beyond fan interest and fantasy leagues. "It started as a fan solution, but it has turned into an operational solution for coaches and officials as well," says Stelfox.

A Multitude of Benefits

The NFL saw a broad range of uses for the gathered information. "Over time, we came to find additional benefits to having this data, from multiple standpoints," notes Swensson. "Besides the obvious media uses in the broadcast and digital markets, we also want to enhance the in-stadium experience, to give fans something original at the venue.

"We can also augment our health and safety initiatives with the additional data. And the teams can use the data to enhance their fitness regimens, see how well players are running routes, what kind of improvements can be made in play calling, and more," he adds.

Enough of the technology was implemented that the NFL was able to test it during the 2014 season, and the results were better than expected. "The results were overwhelmingly positive," says Swensson. "We tested a lot of different systems in the past, and they all produced varying degrees of success. But in 2014, we tracked every player in the league and gathered an immense amount of data."

The technology may have been most noticeable to fans during the 2015 Pro Bowl. "With different players from different teams, it's hard for fans to keep track of who is on the field and when. We were able to put that information on the screen in real time, which was well received by fans."

The technology will be installed in all of the NFL's venues by the start of the 2015 pre-season, and while it may take some time to explore all the possibilities made available by the large volumes of data produced by the RFID solution, fans should start seeing at least some of the additional statistics this year.

As data is further analyzed, more statistics will become available. While still a ways down the road, Swensson's long-term goal for the new technology has implications for many sports. "We have a lot of work ahead of us, but ultimately, we want to track the football," says Swensson.

It's likely that as fans and teams begin to reap the benefits of additional statistics, other professional and college sports will follow suit and start taking their cues from the logistics sector by tracking their most valuable assets—the players. Looking forward, it's not hard to see the exact footage of a home run tracked down to the inch by a chip in a baseball, or the height of an NBA player's slam-dunk measured by a tracker in his shoe.

Popular sports have begun to implement practices that manufacturers and logistics providers have been using for years. If the big data trend has taught any lesson, it's that there is value in compiling as many stats on your assets and products as possible. The NFL knows that, and other sports likely won't be far behind. Enterprise asset management isn't just for logistics and manufacturing anymore.