Port of Savannah: Meet Me in St. Louis 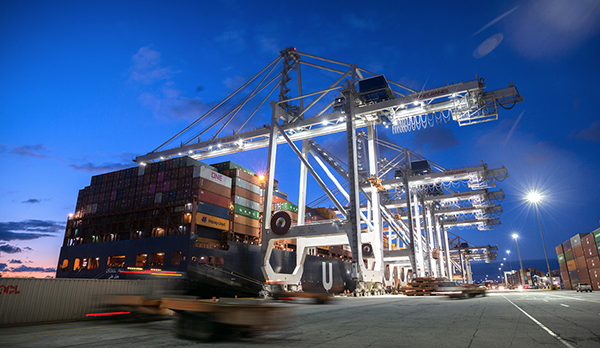 The St. Louis Regional Freightway and the Port of Savannah are forging a partnership to create a new connection between the St. Louis region and the largest single-terminal container facility in the western hemisphere.

In response to record movement of 4.3 million TEUs in fiscal 2017, the Port of Savannah is investing $3 billion to increase its containerized cargo capacity from 5 million to 8 million TEUs by 2028. The investment will accelerate the efforts of the nation's third-busiest container gateway to better support retailers and manufacturers and distribute more goods to and from the interior of the United States. The growing Port of Savannah has identified the St. Louis region as a key import/export market where containers can consistently be distributed at a lower cost for shippers.

An important component of the Port of Savannah's development plan is a new $220-million rail terminal that will be the largest on-terminal rail facility in North America by 2020. The expansion will improve efficiency and double terminal rail lift capacity to about 1 million containers per year.

The unit train capacity on terminal will build density into the system, and enable rail providers CSX and Norfolk Southern to deliver faster, more frequent rail service to Midwest markets, including St. Louis, where both rail companies already have established intermodal yards. Both are Class 1 railroads providing a direct link between the Port of Savannah on the East Coast and the St. Louis region in America's heartland.

Related Articles
Georgia: Setting the Pace in the Logistics RacePanama Canal Expansion: Locks and LoadCross-Border Trade is On a RollImport Express LCL ServiceEast Coast Warehouse & Distribution CEO Jamie Overley: Driven By Results and Big DreamsInbound Logistics Winter Reading Guide 2016The Keys to Dangerous Goods/Hazmat Shipping ComplianceTurn to Technology to Attract the Next Generation of WorkersTransparency to Efficiency: How IoT Can Increase the Productivity of Your Transportation (Sponsored)5 Hacks for Recruiting in Supply Chain Management More related articles...