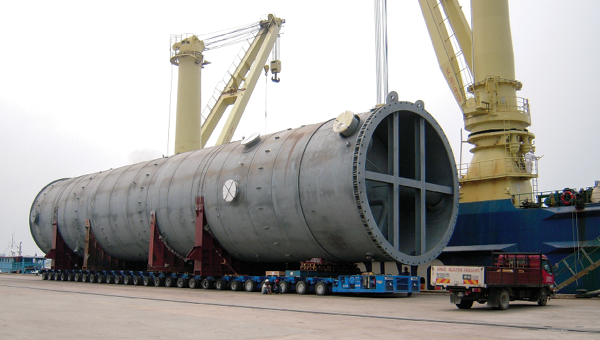 Every project move is unique, and 3PLs routinely find themselves in a trial-and-error cycle as they plan for the unexpected, learn from experience, and continue to perfect the process. Here's a look at some project logistics moves that demonstrate the resourcefulness and flexibility required to get special loads where they need to go—no matter what.

Tracking tools play a vital role in many supply chain projects. But one shipment of delicate cargo involved dropping tracking devices into the ocean—attached to a group of young loggerhead turtles.

Marine turtles are threatened with extinction worldwide. To better understand the migration patterns of loggerhead turtles and protect their nesting sites, the Aquarium des Lagons in New Caledonia—a French territory in the southwest Pacific Ocean—launched a study in 2006 to gather data on the species' distribution in the western Pacific.

The latest phase of the study involved tracking the turtles' movements between their nesting site in New Caledonia and their feeding grounds on the other side of the Coral Sea, near northeast Australia. The project required transporting 46 juvenile loggerhead turtles equipped with satellite tracking devices from the aquarium where they were raised to the open ocean near the feeding grounds.

CMA CGM—a container shipping line based in Marseille, France—loaded the nine-inch-long turtles on the CMA CGM Matisse for deployment on the carrier's Panama Express service.

Packed in individual 20-inch by 27-inch boxes, the 18-month-old loggerheads stowed away in the ship's crew cabin during the overnight crossing.

The next morning, they were released into deep waters on the northeast side of Norfolk Island—located in the Pacific Ocean between Australia, New Zealand, and New Caledonia—before the CMA CGM Matisse reached Sydney.

To prepare for its role as host of the 2014 Winter Olympic Games, the city of Sochi, Russia, has started constructing venues and local sports facilities, along with modernizing and expanding area hotels, residential districts, and businesses. A total of 63 publicly funded projects were planned for completion in 2012, requiring about 100 million tons of infrastructure materials to be transported into the city.

"Considerable international transportation is required for most Olympic venues," says Adrian Hawkins, vice president of projects, Kuehne + Nagel. "This is partly because of the lack of local resources—such as fabricated steel, construction cranes and equipment, and specialized products—needed to meet the huge demand over a short construction period."

Sometimes, dealing with Mother Nature is a project logistics provider's greatest challenge. When Tropical Storm Leslie hit the coast of Newfoundland in September 2012, the province experienced 12 hours of intense rain and wind, resulting in power outages. But a company manufacturing gas processing equipment in China needed to deliver its product for installation there.

"The shipper called on us to manage the schedule and arrange final assembly at the port in Newfoundland," says Bruce Jantzie, senior vice president at Eden Prairie, Minn.-based C.H. Robinson Project Logistics. "We worked with the port to get the space needed to dress the equipment with ladders and platforms."

Transporting the finished product to its final location in Newfoundland required determining the recently assembled equipment's maximum transport height. C.H. Robinson Project Logistics conducted preliminary route surveys, and determined that transporting the largest pieces through the town of Dunville would require lifting three to six electrical wires to gain enough clearance for the loads to pass.

When Tropical Storm Leslie rolled in, however, it wreaked havoc on power lines, resulting in 37 wires that needed to be lifted to allow passage of the largest load.

Organizers had to make last-minute site schedule changes as planned transport days—which involved police escorts and wire lifting—were cancelled because of the storm. By accommodating these adjustments, C.H. Robinson Project Logistics was able to transport the cargo on time and on budget.

In Colombia, electrical power primarily originates at hydroelectric plants located in the center of the country. When drought, transmission issues, or high demand occur, however, these plants are not always able to generate sufficient power to meet the region's needs. In these instances, the Colombian government calls on power plants using other fuel sources to provide additional megawatts.

Termocandelaria S.C.A., a power generation company located near the city of Cartagena, along Colombia's Caribbean coast, is one such source. To generate the requested power on demand and maximize its generating revenue, the company decided to convert from natural gas fuel to dual fuel gas or diesel operation.

Termocandelaria developed an aggressive conversion timetable. Its major challenge was meeting the implementation deadline to expand its capabilities and convert to dual fuels. This required transporting plant equipment and materials from multiple locations around the world to Cartagena.

Materials had to be moved not only from many locations in the United States, including Baltimore, Charleston, Miami, Houston, and New York, but also from Japan, Germany, and Israel.

The shipments required both ocean and air transportation, including a chartered flight from Germany to Colombia. The transportation providers also chose air service from Japan to Colombia, which would have taken 45 days by ocean—time the shipper did not have.

Almost 90 percent of the cargo was purchased on Free Carrier (FCA) terms, which require the seller to deliver goods to a named airport, terminal, or other place where the carrier operates. This involved trucking cargo from manufacturing facilities to warehouses arranged by BDP, then packing ocean and air shipments for transport to Cartagena. Approximately 40 percent of the cargo was shipped from the Port of Houston. Most of the over-dimensional cargo was trucked at night via special trailer, which meant some roads had to be closed.

"Having BDP as a resource that could pull together all the shipments from all the origin countries was key to the project's success," Antequera says.

Moving enormous wind turbine equipment is tough to begin with, but when a portion of the route lacks roads, some creative problem-solving is in order. A recent wind turbine move from factories in China to a wind farm in Mongolia included a 186-mile roadless stretch from the Inner Mongolian border town Erenhot to the jobsite.

In preparation for the move, TransProject—the heavy project logistics division of Seattle, Wash.-based 3PL TransGroup Worldwide Logistics—conducted road surveys with the shipper and road engineers. They determined it was not feasible to pave or gravel the route, because of the dirt's clay-like consistency. Once wet, it gets very thick, then dries hard, causing serious ruts. When wet again, it turns back into a thick goo.

"We spent weeks determining how we could safely transport the components," says Sue St. Germain, executive director of projects at TransProject. "It was also important to contractually allocate responsibility."

The schedule depended on delivering the components during the time of year when workers could be on-site, because it is impossible to drive the route in heavy snow or after a thaw, when the natural road turns to mud. "We needed to deliver to support the site's installation schedule," St. Germain recalls. "But the worst case scenario occurred: unseasonable rain fell for days, turning the entire natural road into a bog."

TransProject dispatched graders and dozers to escort the trucks, and pull them out of the mud when necessary. This caused the transportation process to take longer than planned, and extended the schedule. Nonetheless, TransProject successfully delivered the components to the site before the snowfall made the route impassable.

Location: Copenhagen, Denmark, to Shanghai, China, and back

Countries must take extra precautions when sending an ambassador halfway around the around—especially when that dignitary is nearly 100 years old.

From May to November 2012, a statue of fairy tale character The Little Mermaid served as centerpiece of the Denmark Pavilion at Shanghai's World Expo, where more than 5.6 million people—equal to Denmark's current population—visited it.

The trip to China marked the first time the bronze figure has been transported since it was installed on a waterfront stone in Copenhagen in August 1913 to honor Danish author and poet Hans Christian Andersen. His fairy tales, including The Little Mermaid, have been translated into more than 150 languages.

Danish authorities tapped Copenhagen-based global logistics provider Damco to oversee the national treasure's journey. After securely packing the statue for the 5,130-mile trip, Damco maintained constant surveillance during its Singapore Airlines flight to and from Shanghai.

When transporting large vehicles long distances, most shippers choose an intermodal option that makes the most of ocean and rail transport. Those solutions take time, however, and require access to ports and railyards. When equipment is urgently needed in a landlocked country, the better option may be to take flight.

To handle the flight from East Midlands Airport in Derby to Kandahar, Afghanistan's second-largest city, Russian airline Volga-Dnepr operated a IL-76TD-90VD freighter, an aircraft often used for military and humanitarian aid shipments due to its ability to take off from and land on unpaved runways.

The project, completed in September 2012, required Volga-Dnepr to conduct a detailed engineering study because the fire engines' dimensions called for extremely precise loading into the cargo hold. The carrier inspected the two fire engines to confirm the 50-ton capacity cargo aircraft could carry the trucks, and to ensure optimum load plan preparation.

Working with the shipper, the airline decided to remove certain parts of the fire trucks and place them between the vehicles to allow the clearances required onboard the aircraft. The airline successfully placed the fire trucks into the cargo hold, and delivered them safely and on time in Kandahar.