Project Logistics: Moving the Big, the Heavy, and the Wide 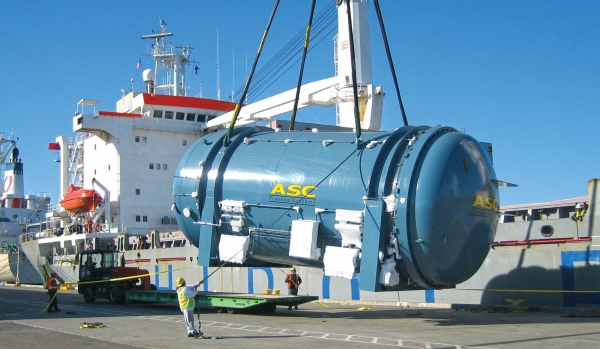 Project cargo logistics has always been a gritty aspect of the supply chain. But increasingly, shippers and service providers are becoming more sophisticated in how they plan and partner for success when transporting oversized and heavyweight shipments.

By day, Route 12 is a visitor's paradise. The 175-mile route from the Washington state line in Lewiston, Idaho, to Lolo Pass and the Montana border follows the Clearwater and Lochsa rivers through the remote Bitterroot Mountains. By night, however, the scenic byway—and its passing turnouts, road construction barrels, and 15-mph hairpin turns—belongs to the megaloads.

Lacking bridges, tunnels, and utility wires, Route 12 is the preferred highway for many over-dimensional loads moving west to east before they veer north through Missoula on Montana Highway 200 to the U.S.-Canadian border. The loads come through the Port of Lewiston, the farthest inland seaport on the U.S. West Coast, served by the Columbia and Snake rivers. It is primarily an export hub for transporting grains to Asia. But on the inbound side, the port has become an intermodal pivot for refinery equipment moving to the oil sands in Alberta, Canada.

In 2011, Imperial Oil, a division of ExxonMobil, began using Route 12 to transport shipments to the Kearl Oil Sands project in Alberta. But public outcry from environmentalists and area residents forced the company to consider other options.

"Imperial Oil has reduced load heights so they can now move on highways through Lewiston," explains Doug Mattoon, executive director of Valley Vision, a public-private organization that promotes economic development in the Lewiston-Clarkston region.

"Depending on the size of the loads, some are offloaded from barge in Washington's Tri City area, then transported over land to Canada," he notes. "Others move through the Port of Lewiston and head north on U.S. Highway 95 to Interstate 90 and into Montana. Imperial Oil isn't moving anything on Route 12 now, but other companies transport one-off loads at night."

Imperial Oil's dilemma reveals many challenges shippers and logistics service providers confront as they transport heavy equipment and oversized loads through communities, between states, across borders, and around the world. Every project move is unique, and companies routinely find themselves in a trial-and-error cycle as they plan for the unexpected, learn from experience, and continue to perfect the process.

California's rampant restrictions make it one of the most challenging proving grounds for shippers moving project cargo. But given the state's location and proximity to all West Coast ports, project cargo moving between the United States and Asia is bound to travel its roads.

Valencia-based ASC Process Systems knows the trials of transporting heavy equipment in California. The company is a leading manufacturer of specialized process equipment, control systems, and custom manufacturing software used in a number of industries including composites, plastics, glass, solar, lumber, and concrete. Among some of the units it produces are industrial autoclaves—behemoth-sized pressure vessels used to process parts and materials that require exposure to elevated pressure and temperature.

On average, the company annually produces two to three superloads—units weighing more than 200,000 pounds. In 2011, ASC exceeded expectations with six moves. Approximately 70 percent of project equipment remains in the United States, while the rest moves offshore.

Like most project cargo shippers, ASC has learned from experience. When every project bears its own special challenges and requirements—and the price of transporting a $2-million piece of equipment can cover 20 percent of the total product cost—lessons are learned fast.

"Moving superloads is complex, especially with the permitting and planning necessary to transport large equipment," says Dave Mason, president of ASC Process Systems. "Then add the hassle of working with the government and transporting units on California's road system. Neither is predictable."

California infrastructure, both bureaucratic and physical, leaves much to be desired for heavy-duty equipment manufacturers such as ASC.

"We've asked officials how long it would take to get permits for a move, and been told one to six months," Mason says. "And they weren't kidding."

Unpredictable administration is rivaled only by cost fluctuations. Quotes from heavy-haul bidders vary considerably. But the real cost of failure when moving million-dollar equipment within tight time parameters places a premium on quality and service.

"I've been burned too many times to let price be the only contributing factor," Mason notes.

The ABCs of Moving ASC

Over the past several years, ASC has worked with England Logistics to move some of its heavy equipment. In December 2011, England Logistics transported to Asia a 200,000-pound autoclave measuring 21 feet high, 21 feet wide, and 48 feet long. The first leg of the journey was a 53-mile move from ASC's Valencia manufacturing facility through the city of Ventura to Port Hueneme.

"It was impossible to get this load to Long Beach," says Bill Hedge, vice president, international growth and strategic planning for Salt Lake City-based England Logistics. "There are too many overpasses and other obstacles. So we had a vessel come into Port Hueneme."

Any time a piece of over-dimensional equipment hits the road, the shipper and service provider must address countless considerations. Special requirements and conditions include various permits, route surveys from state departments of transportation, police escorts, and bucket trucks to lift utility wires.

"Every wire that is moved to accommodate a superload requires clearance from the utility that owns it," notes Mason. "Hundreds of utilities are often involved, and that costs money. If one utility refuses, the shipment doesn't move."

Without proper due diligence, project cargo can be a budgetary sieve. Any error or misjudgment is magnified. "If the proper authorities aren't escorting the load, they could pull it over," notes Hedge. "If you think the load is 14 feet, but find out there are a few extra inches, you'll be fined and denied passage."

ASC and England Logistics' most recent collaboration presented its own unique circumstances and obstacles.

"The load needed to move across a bridge that was being rebuilt over the December 2011 holidays," Hedge recalls. "We had to pay the construction crew to keep the bridge open."

On the planned moving day, a subcontracted trucking company showed up without the proper equipment, so the move had to be delayed to the following Monday—which coincided with Occupy movement protests at Port Hueneme.

Then there were labor negotiations. "We had coordinated with the port to have longshoremen in place," says Hedge. "We had to negotiate with the union and reschedule for Monday. Crossing the bridge became an issue, because California has very particular laws. ASC had to remove weight from the unit to get it across, which meant other vehicles had to follow. This created further problems—we had to work with the union to bring in other load specialists because the autoclave was moving to China and needed to be certified by its standards."

Planning for contingencies is compulsory for project cargo moves. So is partnership. "Whenever you move something big, wide, and ugly it has to be a joint effort," Hedge says. "You can't just hire a service provider and walk away."

The planning process for moving project cargo continues to grow in detail and complexity, especially as manufacturers factor transportation into design and production. Building intricate components intended for assembly on-site has made the project logistics supply chain almost machine-like in precision.

"In the past, companies stick-built equipment on-site at destination or wherever components were being fabricated. Modularization has changed the process," says Adrian Hawkins, vice president projects at global logistics provider Kuehne + Nagel. "Every part is now a critical component. If one unit isn't available at the right time and in the right place, it can affect a whole plant. Moves have become much more critical."

Global complexity only adds to the challenge. Parts and modular packages are being produced in far-flung parts of the world, then shipped to final destinations. The packages are more critical; therefore, planning has to be detailed and partnerships consummated well in advance of the actual moves.

Kuehne + Nagel recently moved a 300-ton gas turbine package for an air and gas facility via ocean barge transport between Italy and Spain.

"At $20 million to $30 million apiece, gas turbines are the heart of the plant system," Hawkins says. "It takes two years to build them, so a lot of planning is required to avoid problems."

Kuehne + Nagel had to control every detail of the project, from planning the barge layout to handling route surveys and determining how the equipment would be lashed and secured. A huge manual outlined each step of the process, including what-if scenarios.

"We documented details about historical weather conditions in the lane, and safe havens in case of bad weather," Hawkins explains. "We did a complete risk assessment of loading and discharging the barge. One company handled transportation from the manufacturing facility to the barge; another took it from the barge and delivered it to the final job site. We chartered the barge and tugs, and led dozens of planning meetings with our partners one year in advance of the move."

ASC pays similar attention to details when it begins planning project cargo moves. In the past, it simply asked partners if they had the requisite permits. Today, however, it works side-by-side with transportation and logistics partners to make sure information is accurate. ASC gets involved in every aspect of permitting, down to the bucket truck.

But the manufacturer has also brought England Logistics deeper into the planning fold, and earlier in the process—at the costing stage. Companies often fail when they don't consider transportation and logistics in the design.

"When a company brings us in from the drawing board, we can tell it how much that design will cost to move," says Hedge. "For example, turning a motor sideways might bring the unit under 14 feet, which will save $50,000."

Companies get set in their ways or become compartmentalized, especially between design, manufacturing, and shipping. When transportation and logistics fall off the radar, costs can accrue quickly.

In Idaho and Montana, Imperial Oil is resigned to breaking down megaload modules so they can move via the interstate, thereby circumventing Route 12 and some of the criticism that has been voiced by opponents. But the same people who oppose oversized shipments on Route 12 are also fighting against project cargoes moving along other highways. This opposition has a major impact on communities such as Lewiston and Clarkston that depend on oversized shipments to grow industrial activity and create jobs.

This impasse between the private sector and public interests remains a constant reminder of the challenges shippers face as they transport industrial cargo. It also raises the importance of communication and public relations between shippers and various jurisdictions that address safety and environmental concerns.

"Getting transportation providers more involved in early stages of the planning process has been a trend for the past five years," says Hawkins. "The emphasis is on safety and environmental awareness. Project owners need to get all parties involved much earlier and create more transparency. Everybody has to be more open about problems, as well as solutions to mitigate risk and create backup plans."

For shippers and service providers such as ASC and England Logistics, failure is expensive. So it ultimately comes down to managing transportation.

In the world of project logistics, that control means everything.