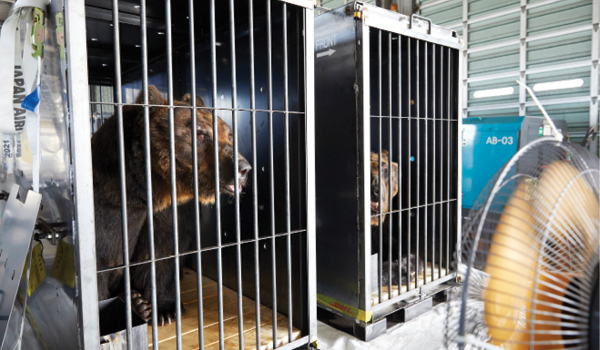 Whether they involve moving endangered animals or perishable delicacies, special projects demand teams that know how to plan thoroughly, collaborate with multiple partners, and prepare for every eventuality.

Need to relocate an endangered animal, transport a tuba or two to Tokyo, or ship a delectable frozen product to the hottest of hot spots? Chances are, a special projects team knows just how to make it happen. Here's a look at how, in today's turbo-charged global marketplace, handling the unexpected, the unusual, and the unwieldy are all in a day's work.

Ionut Mares knows a lot about the happiness of bears, particularly Asia's endangered Ussuri brown bear, which much of the world knows as a black grizzly. As head of airfreight for DHL Global Forwarding's operations in Japan, Mares understands just how these hirsute critters like to travel and just how to keep them comfy.

That's because DHL recently was trusted to move four bears—Riku, Kai, Hanako, and Amu—from Hokkaido, Japan, to the United Kingdom's Yorkshire Wildlife Park (YWP), a pioneer in endangered species welfare. With a mere 10,000 of the bears left in Japan, and with their fate threatened by habitat loss and poaching, the move put the bears at the center of conservation efforts.

In the final month leading up to the move, the careful coordination among various stakeholders accelerated to as many as two conference calls every week with DHL Global Forwarding; the Ainu Culture Museum, where the bears were living; YWP; local governments; and even animal welfare associations.

Coordination between the trucking teams and airfreight teams in Japan and the United Kingdom required additional calls and meetings. Once animal-handling experts were added to the mix, the need for clear communications intensified.

When it finally came time to ship the bears, each leg of their long journey was calibrated from minute to minute, with industry partners making special arrangements along the way to accommodate the animals. "The operation started around 3:30 a.m. at Ainu Museum Hokkaido on August 2, 2018," Mares recalls. The bears left the museum in a 10-ton temperature-controlled truck, headed to the New Chitose Airport to board a Tokyo-bound plane.

"Long journeys can be very disorientating for the bears," Mares explains. "This meant that the temperature had to be set just right for the brown bears, which were living in the cooler Hokkaido area as compared to the city.

"Thus, we had on hand our Tokyo Airfreight Life Science and Pharma team, who are specialists in temperature mapping, to support the move and ensure that the temperature within the truck was kept between 2 and 8 degrees Celsius for the bears' comfort."

Their flight accommodations were just as well considered. "Each bear was placed in a freight-safe enclosure specially constructed for them in compliance with the International Air Transport Association's regulations for shipment of live animals," Mares explains. "The crates were built with sturdy materials and reinforced with a solid metal frame to hold the weight of the 550 kilogram (1,213 pound) bears and provided space for them to lie comfortably and turn around when standing.

"We also took special care to provide ventilation openings at all levels, so that the bears could breathe easily when they were standing or lying down," he adds.

"At the cargo bays, the bears were given ice packs to lower ambient temperatures as they waited to be loaded onto the planes," Mares says. "Besides being kept cool with a constant spray of fine mist from big fans, they were provided with drinking water and received juicy watermelons as treats."

Throughout the journey, a veterinarian and an animal handler accompanied the bears, cajoling the creatures into their crates and monitoring their condition throughout the various departures and arrivals.

"Prior to the trip," Mares says, "the vet and the handler consulted with a professor from Hokkaido University and a doctor from a zoo to double-check on the best possible conditions and requirements. They were also responsible for checking on the bears' condition at the New Chitose, Haneda, and Heathrow airports."

The bears, ranging from 17 to 27 years of age, landed at Heathrow Airport at around 6:30 a.m. on August 3. There, thanks to scrupulous preparation beforehand, they sailed through Customs and were handed over to the Yorkshire Wildlife Park for the final miles of their voyage.

It takes a lot more than luck to keep the Irish diaspora from getting homesick. Wherever they go in the world, the Irish want their "pint of Gat" (slang for Guinness), their rashers (that curious cross between bacon and ham), and their puddings of various descriptions.

That's especially true for the growing Irish expatriate community in perpetually sunny Bahrain. That community is now so sizable that it orders goodies from the Emerald Isle by the ton. But not all of these delicacies are easy to deliver.

Take Irish cheddar—treasured for its compatibility with dark beers and its suitability for fondues. For all its easygoing charm, it's a fussy diva when it comes to traveling.

Just ask Colin Wells, the global head of industry vertical perishables at global air and ocean freight forwarder Panalpina. In spring 2018, Panalpina was tasked with completing four June deliveries of young cheddar to the Persian Gulf, where temperatures that time of year flirt with the 100-degree mark. Those four shipments added up to about 64 tons of the dairy product—the same weight as 10 fully grown African elephants.

Moving 10 pachyderms might well be easier, if only because, when it comes to transporting cheddar, "speed is of the utmost importance," Wells says.

"Cheddar is a hard cheese that does not support listeria monocytogenes growth, which causes it to gradually decompose at all temperatures," Wells explains. Decomposition is accelerated when temperatures fluctuate.

"Maintaining the right temperature during transport is essential for perishables," he says. "Unwanted temperature deviations result in reduced shelf life and, in extreme cases, in completely damaged products that are not fit for sale."

Roughly 20 percent of perishables go to waste between harvest and delivery to the point of sale, Wells adds.

With no time to squander, Panalpina picked up the frozen cheese at the producer's facility in Ireland and then transferred it via multiple refrigerated trucks to London. At the airport, Panalpina teams worked briskly through the night to log the delivery, X-ray the cheese—"almost all perishables are X-rayed prior to export," Wells notes—and then load it on to airline pallets, just in time for an early morning six-hour flight to Manama, Bahrain's capital city.

"The biggest challenge was ensuring the product remained frozen and was delivered to the airline in good time," Wells recalls. "We make sure our operations and the partners we work with maintain the cool chain, and in this case we had to ensure the airline was aware that the product was frozen and guaranteed it would fly it on the agreed flight."

The agreed flight was of crucial importance. A last-minute switch from a freighter to a passenger plane could have had calamitous results. "It is imperative that airlines set the hold of the aircraft to the correct product temperature to minimize temperature build-up during flight," Wells explains. "This is obviously easier to achieve with freight operators and not always possible with passenger aircraft, where you typically have a mix of different products in the hold."

With the delivery having proceeded so smoothly, Panalpina expects to continue supplying Irish cheddar—by the ton—to Bahrain. No wonder Irish eyes are smiling.

Prelude to a Whirlwind Tour

Some special logistics ventures require their own soundtrack—complete with a few drum rolls and a rousing rondo.

Take the case of a recent cargo-partner project to transport an orchestra's worth of musical instruments—from the brass extroverts to the shy woodwinds—from Vienna to Osaka for the beginning of a fast-paced 17-day tour.

Based in Austria and providing a full-range of info-logistics services, cargo-partner is no stranger to challenging airfreight projects, says Christina Kalløkken, the firm's director of corporate communications and marketing. But this one came with extra challenges. Given the limited time between a curtain drop at home and the orchestra's first curtain rise in Japan, everything had to happen to a pulsing beat.

"The orchestra had a performance on the day the cargo was due to arrive, so every hour the plane might have been delayed would have been disastrous," Kalløkken recalls. "We booked the flight via emergency service to make sure that the plane would be in Osaka on time.

"At the same time, we created a schedule to ensure that all involved parties—cargo-partner, our client, the airline, the Vienna International Airport Security Services, and Vienna Airport—would be in the right place at the right time," she adds. "If one of these people had fallen through, we could have missed the deadline."

Scheduling for the return flight was just as hair-raising. With the tour schedule in flux, it was difficult to determine a return location and date for all the instruments. To address this uncertainty, cargo-partner secured the necessary cargo space with several airlines well in advance.

Once the final schedule for the concert series was finalized, the cargo-partner team sprang into action. After the last concert in Sapporo, the instruments were packed and loaded on a direct flight home from Sapporo's New Chitose airport. And just in the nick of time. The instruments were needed back in the City of Music just two days later.

Scheduling was not the only challenge. Ensuring safe delivery of the shock- and pressure-sensitive cargo required careful planning and optimal handling. The orchestra and tour promoter took care of packaging the individual instruments in transport boxes. They also handled the transport of the packaged instruments to cargo-partner's office at Vienna Airport, with cargo-partner coordinating the trucking schedules.

Once the instruments arrived at the airport, cargo-partner took it from there, managing a full array of details. "During the preparation phase, we had to coordinate with the freight department of Vienna Airport to figure out the best way to stack the boxes on the pallets," Kalløkken says. "The client informed us of the number and dimensions of the packages beforehand, and we designed the loading plan in close cooperation with the client.

"Based on this calculation, the airport coordinated the loading of the boxes onto PMC pallets," she adds. "We were there along with an airline employee to oversee the loading. At first, we ended up with one crate left over, so we had to unload and repack to make everything fit onto one pallet. All in all, it took about three hours to load everything on the pallet."

Weighing in at 7,679 kilograms, or roughly 16,929 U.S. pounds, the shipment was distributed over five PMC containers and one AKE container. In total, the shipment consisted of 63 packing units of various shapes.

The cargo-partner team also had to arrange screening by the airport's in-demand sniffer dogs. "For this, we had to place a separate order with the Vienna International Airport Security Services to make sure that the dogs could be there at the time of unloading," Kalløkken says.

By the time the orchestra had returned to Vienna, the air cargo team was ready to take its final bow. And now, should the orchestra opt to tour again, the logistics whizzes at cargo-partner are up for an encore.