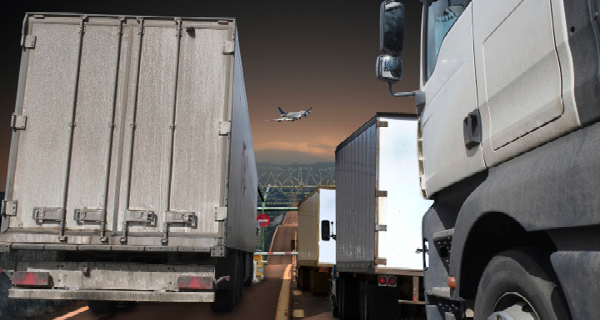 In many cases, even under the best circumstances, border crossings can be rife with paperwork, passports, and delays. But Europe has streamlined the process, with free and open border crossings between most of its member states that eliminate many of these hassles. That is, until recently.

More than nine million refugees have been displaced from their homes in Syria since the civil war began in March 2011, with more than three million fleeing Syria altogether, according to the United Nations High Commissioner for Refugees. More than 150,000 of these refugees have sought asylum within the European Union (EU), with tens of thousands more expected to follow in the coming months. Even more refugees are flowing into the EU as they flee ISIS in Iraq, adding to the smaller but steady stream of people leaving war-torn areas such as Afghanistan and Sudan.

With thousands of displaced foreigners desperately crowding European borders in an attempt to reach countries where aid, living space, and jobs are available, many governments are reinstating identity checks and other policies made to restrict free border crossings. Previously, what is known as the Shengen area allowed free travel between 26 EU mainland states, but many countries have begun monitoring their borders again, and those involved in Europe's supply chain are feeling those delays.

"We are experiencing delays for all our trucks. It is the same thing for everyone in the industry," Cora Buegenburg, operations manager at German-owned transport company Allgeier Translog, told Business Insider.

This is happening at a time when increased trade has already strained capacity for European trucking companies. The EU also suffers from a driver shortage even larger than the one plaguing the United States. With capacity already near its limit, haulage companies are forced to raise their rates to compensate.

Lengthy traffic jams are now the norm in many areas where border checks have been set up to control the flow of people moving between countries. Things are finally starting to settle down in Calais, France, where refugees have tried through most of summer 2015 to jump into trains and trucks heading into the United Kingdom, often leading to accidental death.

Hungary has closed its borders to Serbia and Croatia, even building a 41-mile barbed-wire fence along the Croation border. Austria, Germany, and Slovakia have imposed border checks resulting in delays for haulers, and Poland and the Netherlands are considering doing the same. With no end in sight for the Syrian civil war or the ISIS conflict in Syria and Iraq, don't expect the impact on trade to end any time soon.

"In an industry with very thin margins, these additional costs are not sustainable in the long run," said Sebastiaan Scholte, CEO of Jan de Rijk Logistics, in a public statement. Jan de Rijk and many other carriers are being forced to pass on additional waiting time fees to their shipper customers.

The air transport industry is trying to fill the demand and help shippers avoid costly supply chain disruptions. Time-critical logistics providers are expanding their available capacity through new charter relationships and additional equipment, so that shippers who can't afford for their cargo to wait in border lines will still be able to get their cargo to its destination on time.

"Europe and the rest of the world have to solve this situation. First of all, from a humanitarian point of view, it is our moral obligation to help solve this situation together," said Scholte. "Secondly, these problems are also adding cost to the transport of goods."

That added cost means that European manufacturers and distributors become less competitive with their U.S. and Asian counterparts. With the world just coming out of a recession, many companies can't afford to switch to air or pay extra to move shipments for any extended period.

While the humanitarian needs of refugees must come first, shippers and providers are hoping that European legislators will also keep in mind that there are secondary consequences to the border closings and delays. Legislators must be prepared to streamline border operations between countries if Europe is to maintain its global trade competitiveness.

Looking Forward To the Future

Small and mid-sized freight forwarders need to tap into the potential of innovative new technologies if they hope to remain competitive with logistics giants, according to The Future of Logistics — What Does the Future Hold for Freight Forwarders?, a new whitepaper published by Transport Intelligence in association with technology provider Kewill. As recent acquisitions illustrate, large forwarders are increasing their scale, not only to leverage their buying power and geographic scope, but also to develop their range of services, especially those that add value and increase margin.

Small and mid-sized independent freight forwarders need to evolve if they are to compete effectively. Not only will they have to become smarter and more efficient—in an environment where manual data entry is still widespread—but they will have to enhance their commoditized offerings. For some, this means developing their levels of expertise in niche sectors in order to differentiate their services. Others will evolve from pure forwarders to fully developed logistics providers, increasingly serving shippers with integrated logistics services. The technology systems they offer will be critical to their customer proposition.

What does this mean in terms of technology requirements? At the small to mid-sized forwarder level, technology solutions will need to be quick and easy to implement, providing much higher levels of end-to-end visibility. At the other end of the spectrum, logistics giants will also need to adopt cloud solutions that remove the need for huge internal support functions. These solutions will require the capability of adding broader logistics services as and when required.

So who will win out in this battle between the independent forwarders and the logistics giants? It is clear that scale can help, but it can also hinder agility and the implementation of innovative technology solutions. For "independents" to prosper, however, they will need to become smarter in order to succeed, grow, and lock in customers. This means that they must exploit the opportunities that the democratization of technology has brought about, as well as use the experience, expertise, and decision-making capabilities of their greatest assets — their employees.

A combination of lower fuel costs, excess vessel capacity, and intensive competition between shipping lines has led to a dramatic reduction in ocean freight rates for cargo moving under contracts on the major East-West routes, according to Drewry's Benchmarking Club, a closed user group of multinational retailers and manufacturers who closely monitor their contract freight rates.

The Drewry Benchmarking Club contract rate index, based on Trans Pacific and Asia-Europe contract freight rate data provided confidentially by shippers, declined by seven percent between May and August 2015, the steepest fall since the Benchmarking Club was established in March 2014. Bunker costs have fallen notably since the fourth quarter of 2014, reducing negotiated contract rates since the first quarter of 2015.

Prior to this, there was some strengthening in Asia-Europe contract rates agreed at the end of 2014 when market conditions were stronger. As the spot market has weakened and bunker surcharges fallen, however, contract rate levels have since deteriorated. Some of the fall in contract rates was the result of carriers granting shippers temporary reductions in contract rates to secure cargo. As a result, the Drewry Benchmarking Club contract rate index declined five percent in the 12 months leading up to August 2015.

"We expect contract rates to drop further through the remainder of this year, given falling fuel costs and continued overcapacity," says Philip Damas, director of Drewry Supply Chain Advisors.

The UK Brings It Home

While alternative delivery options, such as click and collect, are making an impact on traditional home delivery methods in the United Kingdom, they still have some catching up to do.

More than 80 percent of all deliveries are destined for a home address, according to shippers responding to the 2015 edition of Triangle Management Services' UK Domestic B2C Express Parcels Distribution Survey, where shippers rate and compare 12 carriers offering UK domestic home delivery services.

The closest rival to home delivery is a work address, which accounts for 14 percent of all deliveries. In-store click and collect (about one percent) and parcel shops and parcel lockers (less than one percent combined) lag far behind.

The home is also at the heart of the returns picture. More than half the shippers interviewed (51 percent, up 10 percent over 2014) say that consumers prefer to return items directly from a home pickup by the designated delivery carrier, while 35 percent (down eight percent from 2014) indicate collection via the nearest post office.

Although alternative delivery methods are used more for returns than for deliveries, they are still uncommon. Only four percent of shippers (unchanged from 2014) say they receive in-store returns, and three percent (up one percent) indicate they handle returns via parcel shops.

Retailers are gearing up for what could be a mega shopping season.
Note the increase in imports during peak holiday season. 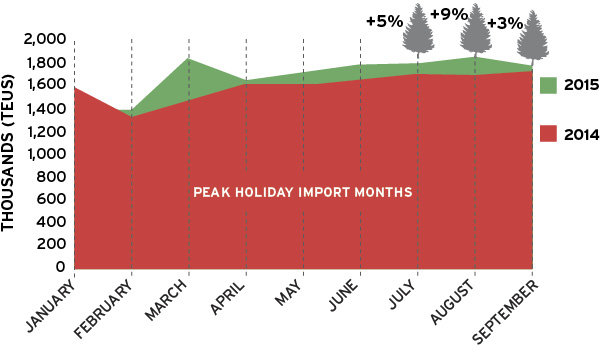