Retail Collaboration: It’s All in the Jeans 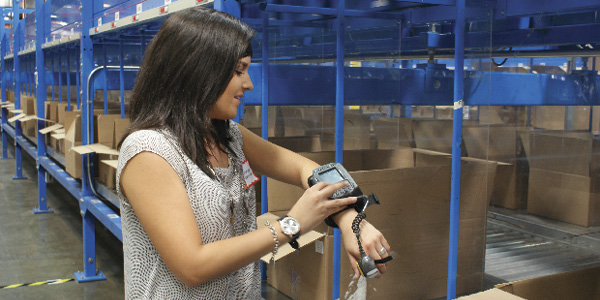 Work with a team of service providers to get a new retail distribution center up and running in only six months? We should all be so lucky.

When Lucky Brand Jeans was sold to a private equity firm, and had to separate from the supply chain of former parent company Fifth & Pacific Companies, the apparel business needed to quickly establish its own, standalone distribution center (DC). The company marshalled help from a third-party logistics (3PL) provider, a technology firm, and a warehouse management system (WMS) provider to build its new DC and have it fully operational ahead of schedule.

Founded in 1990, Los Angeles-based Lucky Brand sells its premium denim jeans and other southern California-inspired clothing and accessories—including belts, scarves, handbags, ties, and jewelry—in more than 250 company stores, on its website, and through other retailers such as Nordstrom and Macy's.

Lucky needed the new DC built and fully operational, including sorter functionality and systems integration, in six months. "The facility also had to service the company's current retail and wholesale operations, and provide capacity for future growth," says Courtney Lynch, Lucky Brand's senior vice president of operations. "In distribution, nothing else matters if you can't get the product out the door on time, and run a well-controlled operation that delivers consistently."

The new DC was up and running in fewer than five months as the result of a collaboration between Ontario, Calif.-based 3PL Taylored Services, Los Angeles-based DC systems and technology firm SDI, and Lombard, Ill.-based WMS provider Zethcon Corporation.

In addition, Lucky, Taylored, and SDI agreed to a unique materials handling compensation structure designed to allow the apparel company to save a percentage of costs over the life of the contract, while giving the service providers additional business.

"We signed the contract on June 26, 2014, and the DC went live on Nov. 3, 2014," recalls Jim DeVeau, CEO of Taylored, calling the fast pace "unprecedented." "It took a lot of team work, and a lot of collaboration among three different companies," he adds.

The initial goal for the distribution center was the ability to ship 70,000 units daily. During startup, the DC had to struggle to reach that number. By June 2015, the operation shipped 286,000 units on its peak day, although not all units were processed that day.

"With the startup, we've been successful in a short time, and we're continuing to work with our providers to hit our service levels consistently," says Lynch.

Announced in December 2013 and completed in February 2014, Lucky's sale to Leonard Green & Partners L.P. for $225 million signaled the arrival of Carlos Alberini as Lucky's chairman and chief executive officer. The deal also called for Fifth & Pacific to support the business for up to two years through a transitional services agreement while Lucky created standalone operations.

Alberini, former co-CEO of Restoration Hardware, had worked with DeVeau in the past, although not directly with Taylored. When the Lucky opportunity emerged, DeVeau reached out to SDI, a firm he has worked with for 20 years, about designing the DC's automation solutions. Senior executives engaged in discussions about the feasibility of providing Lucky faster services at a lower cost.

"The project was a fun challenge," says DeVeau. "Everybody came to the table and everybody's goals were aligned."

Taylored dedicated 300,000 square feet of its 400,000-square-foot facility in Chino, Calif., to Lucky's contract logistics program. If necessary, the jeans maker can eventually expand into the remaining 100,000 square feet, now used for public warehousing. The 3PL worked closely with SDI to make sure the center worked for Lucky.

"We designed, built, and implemented the automation and materials handling solutions that Taylored Services uses to fulfill product for Lucky Brand," says SDI CEO Krish Nathan. "They gave us an empty building, and we designed a system to fulfill Lucky Brand customer orders at the required rate."

Working within the existing operations model that Lucky was migrating from its former parent, Taylored and SDI held several design sessions both in the Lucky offices and at the Taylored facility.

"The team visited the then-current Lucky facilities, and held reviews with several IT consultants, surrounding the integration of the WMS with Lucky's enterprise resource planning system," says Lynch. "One major enhancement the teams built was the ability to have two sorters—one for retail and one for wholesale—which allowed for increased capacity and functionality.

"We had a few small startup issues, as you would expect with an implementation of this magnitude," says Lynch. "But through strong collaboration efforts, the teams knocked down the issues as they came up."

Planning and modeling were critical and Lucky had to make some adjustments from its previous distribution facility, which its former parent operated in-house.

SDI obtained existing distribution equipment from an outside source that it re-engineered and re-purposed for Lucky's DC, which helped expedite the project. After that, SDI used its manufacturing capabilities to build additional equipment in-house, using multiple teams working additional hours on multiple shifts.

"At the height of the install, 50 to 60 people were working on the project six or seven days a week," says Nathan. "It was the fastest implementation we've done for a project of this size."

SDI was the single-source provider and integrator for all the materials handling aspects of the project, including electrical wiring, electric supply into the building, shelving, picking carts, software, support, high-speed conveyors, and onsite maintenance.

The entire automated materials handling system is controlled by a DC management system, an SDI software package that interfaces with a host warehouse management system to ensure accurate processing through all automated equipment.

"The center is running smoothly and hasn't lost any production capacity due to downtime," says Nathan.

That doesn't mean everything has gone perfectly, however.

As a result, the first 60 days were tough. The DC, which has an average of 120 employees spread over two shifts on a typical day, quickly hit peak numbers.

SDI has an ongoing, 24-hour remote support contract for the facility's software, as well as on-site technicians to provide support when the DC is operating. "We do everything we can to make sure that the facility runs at optimum capacity, and that system availability is high," says Nathan.

The fact that Taylored and SDI were willing to be paid piecemeal will result in cost savings for Lucky over the life of the contract. A large part of the providers' compensation will be paid out on a per-unit basis, with a percentage paid up front. This compensation structure, which was designed to give the clothing company the benefits of scale, is estimated to save Lucky 25 percent on a per-unit basis. It's the first such contract that Taylored has entered.

In the aftermath of its sale, Lucky Brand continues to transition other aspects of its business. "We picked Taylored Services as our 3PL partner because we could continue to grow with it," says Lynch. "Within a short startup period, Taylored already meets our receiving, processing, and shipping expectations."

As a result of their strong partnership, Lucky Brand and its service provider teams will keep finding ways to optimize the distribution pipeline. Their collaboration remains the retailer's lucky charm.