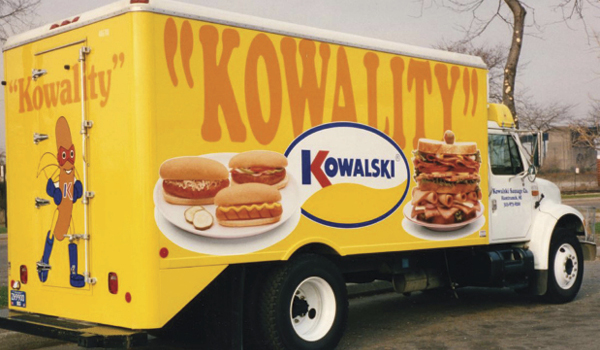 Kowalski Sausage implements a new in-house routing and dispatching system to improve how the piggies get to market.

Since 1920, Kowalski Sausage Company has kept Michigan and surrounding states well fed by offering 55 types of locally made meat products, side dishes, and a new line of salad dressings. The company has been growing its menu of products by acquiring new companies, but its routing and delivery system couldn't cut the mustard.

The fourth-generation family-owned company operates a fleet of 10 trucks and drivers that directly service about 500 grocery chain stores, independent grocers, distributors, and warehouse clubs, with delivery windows that range from 30 minutes to six hours. Kowalski's raw and unprepared foods require refrigeration during transport, so on-time service from its three production locations is vital.

For years, Kowalski Sausage relied on route sales people and drivers to make daily sales and deliveries at the stores. Then, in 2010, the company changed its business model to separate sales and fulfillment staff, add a sales force and call center, and allow drivers to focus on long-standing delivery routes. The company typically delivers orders within two days, and maintains regular delivery schedules that receivers and drivers have come to live by. For instance, Tuesday is Kroger day.

As part of its business model shift, Kowalski signed a five-year contract with a routing and dispatching provider, which used its own dispatcher, took control of routing, and handled driver and service issues, such as missed delivery windows. It all looked good on paper, until standards started to slip.

"Drivers returned later, trucks broke down, and we missed service windows, yet we did not hold the provider accountable," recalls Crystal Towery, assistant controller for Kowalski Sausage.

The office closes at 4 p.m., but unhappy drivers were returning from routes as late as 7 p.m., resulting in missed service windows and higher labor costs. "Some days, the drivers were out on the road for 12 hours and that was not good," she says.

The provider's Unix-based dispatching system presented a real obstacle to getting a handle on service levels and driver performance. "It was hard for anyone at Kowalski Sausage to even understand the system because we only had limited access to it," Towery says.

Kowalski assigned Towery the task of getting its logistics house back in order. She knew it needed a user-friendly, Windows-based dispatching and routing solution.

Getting These Piggies to Market

Towery researched four different logistics systems providers; two offered Unix-only systems, which took them out of the running immediately. After her due diligence, she decided to implement Roadnet Anywhere from fleet management solutions company Omnitracs.

Roadnet Anywhere is the Software-as-a-Service version of the Roadnet system, which launched in 1983. Omnitracs purchased it from UPS in 2013. Companies use Roadnet to manage private and for-hire fleets, from one truck up to 7,000 trucks, but the average user runs 65 to 75 trucks, says Cyndi Brandt, senior director of product marketing and strategic alliances for Omnitracs. More than 50,000 customers in 80 countries use the system in businesses as diverse as pork farmers, visiting nurses, and recycling trucks.

Towery valued the browser-based routing and dispatching software's ease of use. "Omnitracs was able to import and load our orders into Roadnet, and demonstrate how it works," Towery says. "I've never worked in shipping or dispatching, but after the demonstration, I felt that with a little assistance, I could run the entire dispatch system."

Towery was able to negotiate an exit for the existing outsourcing contract, and signed up with Omnitracs. The system provides a holistic view of truck fleets, consolidating routing, dispatching, proof of delivery, telematics, customer notifications, and business analytics in one place.

Since Kowalski Sausage implemented the Roadnet Anywhere platform in February 2015, the payoff has been steady. Routing expenses have dropped by more than an estimated 60 percent, due to several factors. For instance, dispatching is no longer an outsourced full-time job. Now, the warehouse manager takes care of it in about 30 minutes at the beginning of each day. The manager can make changes on the fly during the day, adjusting start times and routes, or adding an extra stop. "It's much easier to do this because it's all at our fingertips," Towery says.

During implementation, Towery met with drivers as they returned from routes. She asked for their input on designing routes, tapping into their years of experience with local traffic and customer relationships. Making deliveries to the same stores year after year, drivers get to know the store managers.

The drivers gave Towery invaluable insight. For example, one driver said, "I know it looks better on the map to send me to this place first, but the manager goes to lunch early. I'm better off going to the next place first, and then going back."

"Changing the route adds only 5 minutes to the schedule, and we don't make the receiver mad or miss a window," Towery says.

Kowalski Sausage has honed its customer routes over the years; they are not necessarily the most efficient, but they are effective. For example, stores that order on Monday expect their Kowalski order on Wednesday. Delivery one day early can be as much of a problem as one day late. The company served major chain stores on Monday and Tuesday, and independents on Wednesday. Everyone knew the system. The warehouse crew picks items and loads trucks in descending stop order based on the routes.

Initially, the Roadnet system wanted to route the orders as efficiently as possible, without regard for the traditional structure. Towery worked with Omnitracs to build route templates, which kept the orders scheduled on their traditional days and captured the drivers' local knowledge.

Capturing that internal knowledge is one area where Roadnet shines, Brandt says. "It's not uncommon to walk into a distribution center and see Joe the router flipping invoices into stacks for each driver because he has all the information in his head," she says. "Our job is to pull the information out of his head and automate the routing process so it drops from a 6-hour process to one hour or less."

Even with Kowalski's daily standing orders, the routing system allows the warehouse manager to track drivers and update customers about any delays. It also takes much less time to create and change routes.

How the Sausage is Made

Roadnet uses algorithms based on the user's input on various factors such as receivers' operating hours, customer size and priority, cost of vehicle operation, and driver qualifications to create the most effective and cost-efficient routes.

"Because Kowalski carries refrigerated food products, we set up the system to look at how long product is in the truck using different options such as how long the route should be, or the maximum number of stops," Brandt says.

During implementation, the only change Kowalski had to make was replacing outdated flip phones with smart phones that could display the routes and send data back to the system.

The added transparency from being able to track driver behavior has resulted in a few driver terminations and, ultimately, a higher performing fleet.

"We discovered that a few drivers were going home during the day, driving our big trucks on residential streets. That could have caused us a lot of trouble with the city," Towery says. "Terminating those drivers was an easy decision, and once word got out in the company, drivers began to meet their service windows every day."

Kowalski has also tested the additional features of Roadnet Anywhere Mobile Premium, which provides signature capture, picture notes, and auto arrive/depart. The company will stick with paperwork for now, instead of electronic proof of delivery and other high-tech solutions, because most of its large customers demand a paper trail.

Kowalski is expanding its offerings of signature sausages, lunchmeats, pierogies, and side dishes with a salad dressing line. The company plans to handle the increase in volume with its existing fleet, thanks to the efficiencies of the Roadnet system.

"Adding a salad dressing line will expand our sales, but we don't have to incur added transportation costs," Towery notes. "We can add an extra 15 to 20 cases of salad dressing on a truck because we're going to those stops anyway.

"Now that we utilize our trucks better, we won't have to add to the fleet."