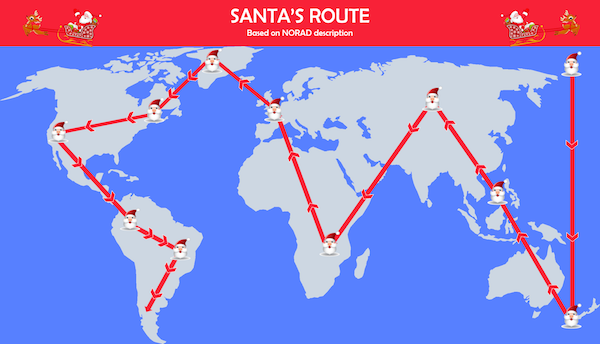 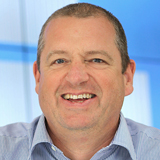 Christmas, Inc. has a problem. And the blame rests squarely on the ample lap of its Chief Everything Officer, Santa himself.

By failing to implement automated routing and scheduling software for his yearly 75-million-mile Christmas journey, we estimate Santa is adding 15 million excess miles and 5 extra hours to his 24-hour trip.

We know what you’re thinking, “Santa’s old school and that’s what makes him special.” Well, the horse and buggy was old school. The abacus, too. How many of either do you own?

It’s time for a little tough love to bring transformational change to a 1600-year-old process.

Let’s start with the obvious: the route itself. Now we can’t show you each and every stop on a map, but our friends at the North American Aerospace Defense Command (NORAD), who’ve been tracking Santa’s route since 1955, provide enough information to chart a high-level, country-by-country route.

From the Western U.S. to South America, backtracking across time zones? Seriously?

There’s a better way, and it starts with data on every household visited.

Those delivery points are uploaded into sophisticated software that plots the best continuous, multi-stop route to deliver gifts in the least time and travel miles. Among the benefits, based on available gift-giving data and estimated naughty and nice percentages:

• Less wear and tear on sleigh and lower maintenance costs

Here are just a few of the other perks of Santa embracing the full complement of automated routing tools:

The obvious argument against automation is: “If it ain’t broke, don’t fix it.” After all, Santa has huge advantages that would be difficult for anyone, even Amazon, to replicate (ability to bend the rules of time and space, and everlasting life). But it’s these precise advantages that can spawn complacency and that fateful “we’ve always done it this way” attitude.

It’s time for a change. With the right software, the changes already outlined could happen rather seamlessly. But the biggest benefits could come from wholesale process change.

We’re talking about scaling back Santa’s duties to what he’s best at – gift delivery and being the world’s greatest goodwill ambassador – and turning over the operational reins to a proven but under-utilized talent at the North Pole: Mrs. Claus.

Utilizing a control tower model, she’d call the shots remotely on Christmas morning based on a 433-million-stop routing plan. Route progress would be monitored in real time on a 24 by 36 foot screen and any deviations from plan would trigger contingency steps that would be communicated directly to the sleigh.

We’re not suggesting such changes could be implemented this year (that would be crazy). But automated routing is well within scope for Christmas 2018.

So Santa, if you’re reading, let us know your schedule for January. We’d love to do a post-route driver debrief and share our thoughts on the future.