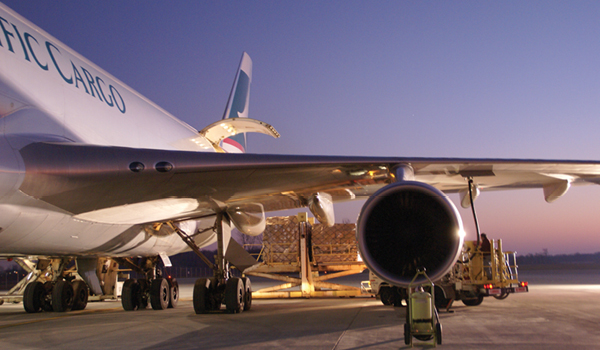 With an emphasis on speed and service, Rickenbacker International Airport helps shippers move freight with speed, care, and efficiency.

When companies opt to use air to transport cargo, they are making a strong commitment to having speed become a supply chain priority. However, a key, often-overlooked characteristic of air cargo can undermine that core benefit: the potential challenges of moving freight quickly once it has reached the ground, says David Whitaker, chief commercial officer for the Columbus Regional Airport Authority, which runs Rickenbacker International Airport (LCK), Columbus, Ohio's freighter hub for the eastern United States.

The issue, Whitaker explains, is a myriad of challenges at traditional gateway airports, where cargo flights contend for space and resources with passenger flights. The result is that "you can fly anywhere in the world in one day, yet sometimes it takes days to recover air cargo once it gets to the airport," he says. Among the key factors causing this are trucking access, congestion, and the long trips from ramps to warehouses.

Rickenbacker is different, Whitaker says. The airport primarily serves cargo flights, allowing it to focus on the needs and challenges of the parties involved in that field. This gives Rickenbacker a speed and service advantage.

"Rickenbacker is a very big airport but it has been set up in a way to conveniently serve the air cargo industry," Whitaker says. "The airplane is parked within a few short meters of the cargo building, which is connected to the roadway system. Your air cargo is off the plane, into the building, and going toward its destination often within a couple of hours after arriving. That's simply not what happens elsewhere."

Speed and Service: A Winning Combination

The industry is rapidly taking notice. Total cargo at Rickenbacker has increased 28 percent in 2017, and the airport has moved 81,000 metric tons in total aboard freighters through September. Whitaker says the momentum spurring Rickenbacker's growth can be traced to its dedication to the basic tenets of speed and service.

"We move your air cargo the way it should be moved," Whitaker says. "Once it gets on the ground here at Rickenbacker, it's not going to be lost, delayed, or caught up in congestion."

RCS Logistics, a Hong Kong-based logistics provider, operates three weekly charters into LCK, servicing most of the United States within two days; it also has operated 27 additional charters in 2017. RCS maintains a 48,000-square-foot bonded container freight station on the ramp at Rickenbacker. The company distributes air freight from Rickenbacker to as far away as New York to the east and Nevada to the west. Rickenbacker's tender times—the recovery time for cargo after it lands—is a boost for RCS Logistics' daily operations.

"LCK is a great fit for our customer base because we can deliver faster from the central location of Columbus, Ohio," says Brian Heaney, president and chief operating officer of RCS Logistics. "LCK allows us to increase our speed because of the ease of doing business in the port. We have been able to decrease our transit times because of our charters and on-tarmac container freight stations.

"The major challenges that we face in other ports is the time it takes from wheels down to cargo availability," he adds. "The airline to warehouse transfer is normally eight to 24 hours. In LCK, it happens in less than three hours. We have freight arriving and out to distribution centers in less than nine hours."

Speed is not solely about how quickly the planes or trucks travel, of course. Columbus' simple geographic advantage adds to Rickenbacker's appeal, Heaney says.

"Location, location, location," Heaney says. "On top of the ease of doing business in LCK and not having to deal with the challenges at bigger airports, the pure location of the airport makes it that much better. Seventy-five percent of our customers' distribution centers are one to two days away via truck. LCK is all about going faster and speed to market. That is what our customers want."

A Partner, Not Merely a Provider

Whitaker says Rickenbacker's staff prides itself on being more than just infrastructure providers—they are also service providers who bring together stakeholders such as airlines, freight forwarders, terminal operators, trucking operators, and others to pursue common goals.

Staff and other resources are dedicated to working with clients on various aspects of the air cargo supply chain, helping to inform them and link them with suitable partners. As neutral agents, Rickenbacker staff can facilitate speed and service through these partnerships. They also can create a tight-knit air cargo community within the airport, even among competitors and differing links in the air cargo supply chain.

"We are deeply engaged with all facets of the industry," Whitaker says. "We like to say that we're dot connectors. As an airport, we don't make, ship, or fly anything, but we're important dot connectors and very engaged with every step of the process. It's one way we can differentiate ourselves from other airports."

LCK staff provides contacts and resources for shippers and forwarders, such as identifying viable trucking solutions and providing contacts for booking freight on LCK partner airlines. They even help with catering and crew arrangements so the air carriers can operate more confidently and comfortably.

In addition, LCK manages the ground handling for all freight cargo, encompassing tasks such as ramp marshalling, loading and unloading, working with customs to clear cargo and crew, hotel accommodations, and transportation.

"A business unit of the airport authority does whatever is needed from a ramp perspective, and that has been a key part of our success," Whitaker says. "We don't rely on a third party to provide these services. We own the equipment and provide those services. We also derive revenue from that, which helps us be self-sustaining as an airport."

Collaboration in the Warehouse

A prominent example of innovative partnerships at work at Rickenbacker is its Air Cargo Terminal No. 5, which was constructed through a public-private partnership with input from major stakeholders. The terminal houses airlines, forwarders, and associated supporting agents, all under one roof with the terminal operator. The model has proven critical to boosting Rickenbacker's speed and ability to be responsive to industry customers.

In most similarly sized air cargo warehouses, freight forwarders handle their own cargo in the building and the facility is divided into spaces for each forwarder with heavy walls, gates, and fencing. "It impacts the efficiency of the way the building can function," Whitaker says.

At Air Cargo Terminal No. 5, only the warehouse operator moves cargo in the building and the freight forwarders do not move their own cargo. There are no dividers, making for more ease and efficiency of movement. In fact, a common space inside the building with a kitchenette and conference room encourages collaboration among the various industry players, while large plate glass windows nearby let everyone observe the aircraft operations in progress.

"It's an unusual setup, but they all work well together in there," Whitaker says. "It's unique to have all the players in the air cargo business collaborating within a building like that."

Whitaker says Rickenbacker staff members are hustling to improve awareness of the advantages the airport offers. In part, that means convincing shippers, forwarders, livestock exporters, industry players, trucking companies, and others who are accustomed to larger gateway airports to take a look at Rickenbacker and the distinctive benefits it offers to customers.

"We know that we're not the only airport in the eastern half of the United States and people are invested elsewhere, but we want them to give it a try," Whitaker says. "Perhaps we can do some smaller shipments with them to see if that works, and then perhaps move toward making it a larger operation. We think they'll want to once they see the operation up close."

Rickenbacker's vocal backers are not limited to airport staff. "We have the benefit of shippers in our market saying, 'Listen, I have a preference for Columbus,'" Whitaker says. "It is very powerful for us, and we are deeply grateful for the engagement of the shipper community, especially those that have really leveraged their business around Rickenbacker. It has been very helpful."

RCS Logistics opened an office in the Columbus area eight years ago to serve local customers. In the years since, according to Heaney, the company has seen "nothing short of an explosion of customers" in Columbus through its charters from Hong Kong and its container freight station. "We have been able to draw in a whole new group of customers that see the value of a great airport," Heaney says.

"To me, LCK was a blank canvas and an untapped airport," he says. "We saw the potential and invested heavily in the market. We now employ more than 40 people and have moved millions of kilos of freight through the port."

Whitaker believes LCK has thrived, benefiting itself, its customers, and the region, because it has concentrated on being a freighter-dedicated hub and never chasing unrealistic expectations. The airport's operators look for opportunities to innovate, but never without a purpose.

Perhaps most importantly, airport operators have engaged with stakeholders and sought to learn how they can best serve them. "Airports must be willing to step out of their role as landlord or construction manager," Whitaker says. "They need to engage in the entire air cargo supply chain that touches them."

"International" is a crucial word for Rickenbacker International Airport in Columbus, Ohio. International cargo accounted for nearly half of the air cargo handled through September 2017, and has grown a staggering 69 percent so far this year.

"We're making great progress in that regard, because we were not an exporting location about a year and a half ago," says David Whitaker, chief commercial officer for the Columbus Regional Airport Authority, which runs Rickenbacker.

Whitaker says Rickenbacker is relatively new as a gateway airport and the bulk of the cargo increase can be attributed to new capacity or newly used capacity.

"In some cases, airlines have been using Columbus in conjunction with another city to achieve their export balance before departing for their home country," Whitaker says. "But we're seeing an increasing reliance on Columbus as the sole U.S. stop for exports."

Rickenbacker has carved out a place for itself in the livestock shipping field, becoming an authorized Port of Embarkation for the export of animals. "It's very valuable," Whitaker says. "Horses provide export weight and a different commodity. There's a real niche industry in the movement of livestock globally, and we've been able to capitalize on it."

"The airport is capable of much larger numbers, and we're going to try to get there," Whitaker says.