Supply Chains that Rock Around the Clock: Come Sail Away With Me 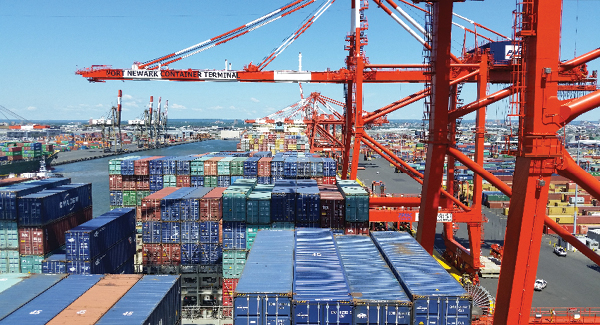 CMA CGM is floating on high. During the first half of 2015, the carrier increased freight volume 8.2 percent to 6.4 million TEUs.

From Manic Monday to Friday Night, ports are awash with activity.

The ocean shipping industry is awash with challenges as tepid freight volumes and overcapacity continue to erode revenues. Steamship lines are hyper-sensitive to shifts in demand. Consequently, many are idling vessels, reconfiguring service strings and port calls, and joining alliances to help rationalize capacity and better utilize assets.

Port efficiency and throughput is equally important. As the Panama Canal's grand re-opening nears, and larger containerships come online, carriers are further challenged with streamlining and expediting vessel discharge and loading at port. Time is money—especially as containerships approach 20,000 TEUs.

A containership's arrival at port generates a buzz of activity as stevedores and truck drivers gather enmasse to work the vessel. That said, most of the preparation occurs days in advance. Steamship lines often start planning five to 10 days out, depending on the origin of the last call, to ensure discharge and loading happen as seamlessly and efficiently as possible.

Containers in pre-loaded stacks are reworked into proper sequence to avoid delays during loading to vessel. In this scenario, it's worth the cost of rebuilding and resequencing boxes to ensure the smoothest operation loading to the vessel. Each container going on the ship has a designated stowage location onboard, based on destination and weight. Having them arrive at the crane for loading at the proper time is critical to avoid re-handling or wasted time spent waiting for containers.

WHERE THE Action IS

The arrival of a vessel at destination harbor or channel triggers a sequence of events. Consider, for example, this scenario: CMA CGM's 8,469-TEU Dalila reaches New York Harbor early in the morning for an expected 48-hour layover.

During the Dalila's stay at port, four gangs of longshoremen work the vessel 21 hours per day for two days—including mandated one-hour meal and leeway breaks.

Provisions are usually delivered shipside by truck using a small onboard crane to bring pallets up to the main deck. Bunker fuel is loaded from a barge on the off-shore side of the vessel while cargo operations are ongoing. Crews will take a taxi to local stores for personal shopping or dining while off ship.

Even before the Dalila arrives at Port Newark, plans are already in motion at its next port of call—Norfolk—to open receiving for cargo. All along the vessel's service string, a cascade of inputs and outputs impact forward planning and operations. Upon completion of loading at port, the vessel prepares for departure.

Once all cargo operations are complete, the tugs and pilot return to guide the vessel back out of the harbor. When reaching the end of the channel, the pilot departs with the tugs, and the vessel proceeds to the next port, where the entire process is repeated.

Meanwhile, at Port Newark, Customs clears and releases containers discharged from the Dalila. They then continue their onward movement to their final destination in North America. Some containers move by truck on shorter drays within the local area, while others move directly from the container yard onto specially constructed railroad cars bound for hinterland destinations.