The Bright Side of Logistics in India 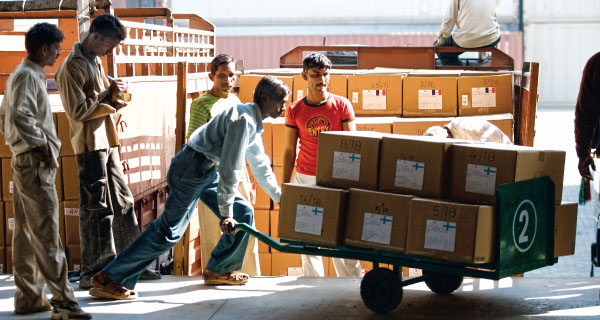 There is more to India's supply chain scene than its transportation infrastructure shortcomings. APL Logistics' David Frentzel shares insights from a recent tour of his company's Indian facilities and meetings with shippers.

When it comes to establishing operations in India, companies face numerous supply chain hurdles. The largest one of all, however, may be a perception rather than a reality.

"Today's businesses are almost hyper-aware of India's supply chain drawbacks," says David Frentzel, vice president of global contract logistics at Scottsdale, Ariz.-based third-party logistics provider APL Logistics. "But they've been largely kept in the dark about solutions or tools that could help them address those challenges. As a result, many companies operate under the assumption that nothing can be done about them—even though that's far from true."

In this exclusive interview, Inbound Logistics asked Frentzel, who recently returned from visiting APL Logistics' facilities and customers in India, to help set the record straight.

Q: Since we're discussing India, it seems appropriate to start by addressing the elephant in the room: Is the state of logistics in India really as challenging as people say?

A: It is—and I say that based on both my firsthand, on-the-ground observations and data from various sources. For example, the World Bank ranks India 134th out of 183 countries in terms of ease of doing business and ranks the country's logistics performance 46th out of 154 countries. By contrast, the United States and China ranked 5th and 79th, respectively, for ease of doing business and 15th and 26th for logistics performance.

Q: You're more reluctant than other logistics service providers to emphasize the negatives. Why is that?

Imagine what it would be like if you went to a doctor and were diagnosed with a chronic condition. If your doctor then listed all the uncomfortable symptoms but failed to give you something for pain or recommend a course of treatment, you'd probably consider changing doctors, because you're looking for relief, not gloom-and-doom.

It's the same with companies' supply chains in India. Generously dispensing the bad news about ongoing challenges, such as the state of the country's roadways, tax laws, and distribution centers, is not helpful unless it's balanced with some realistic advice about how companies can work their way through them.

Q: Are you willing to dispense that advice—starting with the infrastructure issue?

A: I'm the first to admit that the country's roadways leave a lot to be desired. They're highly congested, and many are in very poor condition. And with just 70,000 miles of them, they're not nearly extensive enough to handle the dramatic increases of traffic that are expected in the next 10 years. I also agree with the many experts who say that India needs to substantially expand both its supply of, and reliance on, ports, airports, and roadways.

But the good news is it's making some progress. According to a June 2011 report, India will award $12 billion worth of highway construction projects this year, which it's hoping will add 4,536 additional miles to its roadways and get it back on track to its goal of completing 20 new kilometers of road per day within three years.

India also will begin having companies that are competing for road contracts bid online in hopes of making the bidding process more transparent and therefore more attractive to foreign investors.

Furthermore, the Indian government plans major investments that will triple the country's cargo handling capacity at 12 major ports, with the goal of being able to handle three billion tons per year by 2020.

In addition, the Indian government has encouraged private infrastructure investment and the launch of privately operated rail transportation solutions such as APL Logistics' IndiaLinx. This latter point may become especially important to shippers of large, heavyweight goods, because restrictions on the size of trucks that will be allowed on the highways are anticipated; in fact, their need to rely more on rail may help accelerate more intermodal innovation and investment.

Even though India's transportation glass may currently be half empty, rather than half full, the situation is slowly changing for the better.

Q: What can companies do to increase their India transportation efficiency in the meantime?

A: In a country where it's not unusual for the average delivery truck to move at 12 miles per hour, a better mix of rail and truck could make all the difference. Expanding private rail services with stacked train options could be especially useful while the road network catches up, particularly along India's major north and south rail corridors.

In addition, I can't stress enough how important distribution centers are in terms of enabling companies to use local depots and inventory on hand to help offset delivery volatility. That's not something we always want to advocate in logistics. But it's often a necessity that has to be factored in.

Q: Why do so many companies operate a warehouse in every Indian state instead of employing more centralized DC strategies like they do in other countries?

A: Financial necessity. Right now, India has yet to adopt a uniform goods and services tax (GST) nationwide. A labyrinth of state tax regulations requires companies to pay taxes each time inventory crosses state lines, so shippers have learned to minimize their tax burden by having a DC in most Indian states where they do business.

There are plans to introduce a GST. But unfortunately, progress has suffered multiple delays, because it has been a huge challenge trying to reach the necessary consensus among the states. At least half the states—and two-thirds of India's Parliament—have to approve the new tax in order for it to go through.

Will it happen in 2012 as many predict? It's hard to say for sure given past delays, the unpredictability of government decisions, and what is at stake for the individual states. Political momentum seems to be building, however, especially with the recent appointment of Sushil Modi as the GST panel's new chair. Modi, who is a key member of the opposition party, has been a strong advocate of the GST from day one, and experts believe that having him head the charge could help diffuse a lot of the opposition and help pave the way for an eventual consensus.

Q: Assuming the GST does finally go into effect, does that mean companies will be free to pursue more efficient distribution network designs in India?

A: Absolutely. Some analysts estimate that the GST could add 1.5 percentage points to India's already fast-growing economy by eliminating inefficient tax avoidance practices, including those costly, decentralized, state-by-state distribution networks. It will be much more feasible for companies to pursue DC network strategies that use larger regional hubs instead of multiple smaller ones. And that, in turn, will help improve their overall India logistics efficiency.

Q: Once companies can employ this more regional DC strategy, what warehousing venues should they pay special attention to? How many warehouses should they consider operating within India?

A: That's a question better answered by a network optimization exercise, because every company's ideal mix of locations will be a bit different. In general, however, sites near Bangladore, Chennai, Gurgaon, Hyderabad, Kolkata, Mumbai, Nagpu, Patna, and Ziakpu deserve a closer look.

Q: Assuming companies do wish to set up warehousing operations in one of these markets, what lead times and expenses should they be looking at?

A: It's all over the map. For example, according to the World Bank, opening a warehouse in Mumbai requires obtaining 37 permits, which should take a company about 200 days. By contrast, Kolkata requires just 27 permits; however it takes 58 additional days to get them.

Q: So a good rule of thumb is to factor in a fair amount of lead time and start-up budget, regardless of which venue a company chooses?

A: Unless companies elect to work with a property developer that has space available, or a 3PL that already operates facilities in their areas of choice, yes.

It's also important to collaborate closely with contractors during the construction phase, especially on basic issues such as the quality of the flooring, because cracking is a common issue. For example, during construction of APL Logistics' newest India facility, we requested a higher grade of cement.

Q: In the past, limited communications and power supply reliability impaired operational efficiency for many warehouses in India. How much of an issue will those limitations be going forward? And what can companies do to offset them?

A: India's Power For All By 2012 initiative means that power and communications improvements are on the way, but I wouldn't expect that to be an immediate panacea. For the foreseeable future, companies should still invest in battery packs, back-up diesel generators, and uninterrupted power supply solutions for their India DCs.

Q: What about the high rate of inflation in India? How is it impacting logistics?

A: In June 2011, the Indian government reported a higher-than-expected 9.06 inflation rate in May from one year earlier. This led its central bank to raise the benchmark interest rate for the tenth time in 16 months. For logisticians in India, this persistent inflation has contributed to the rising cost of everything from labor to fuel—and related services.

It's difficult to predict how quickly government efforts will be successful in cooling the economy and taming inflation. But like other world regions, the prospect of a return to high oil prices causes concern. The silver lining, however, is that improvements in India's infrastructure and the GST changes should enable companies in India to boost logistics and transportation efficiency (in other words, do more with less) despite rising fuel and commodity prices.

Q: No discussion of India would be complete without mentioning its vast working age population.

A: India has a huge young and largely English-speaking workforce, which will add close to 140 million people to its ranks in the next decade. This is good news in terms of warehouse operations, because India's warehouses tend to require three to five times more human resources than warehouses in the United States.

But it's important to make a distinction between labor and skilled labor. The country still struggles with low educational levels and high illiteracy rates because, until recently, many Indian parents pulled their children out of school to help with farming.

Now that India has become such a fast-growing economy, many Indian parents are rethinking that practice and encouraging their children to stay in school longer, because they know it will help them land better jobs. Yet it will take time for what is currently a large skills gap to completely close.

Q: What do you advise companies to do in the interim?

A: Even though it will cost more money to do it, companies should hire college and high school graduates to work in their India distribution centers. The superior skills these graduates bring will be worth the extra expense.

In addition, companies should create initiatives that will help retain these professionals once they've been trained, because many companies will be looking for opportunities to recruit them after that. Another option is to work with 3PLs that have already done the recruiting and training work and have strong retention and incentive programs in place.

Q: What does India's future hold?

A: Regardless of how companies feel about doing business in India at the moment, two things are certain: It's already the world's second-fastest growing economy, with an estimated GDP growth of 8.5 percent.

And as its population of 1.2 billion people grows, it's only going to become more significant.

Businesses may face some bumps—or potholes—in the road as they work to get established there. But it's a journey that should be well worth it in the end.

Related Articles
Crossborder E-commerce Into the U.S. Just Got A Lot Easier – U.S. Retailers Should Take Note and Plan AccordinglyThe Supply Chain of the PastPrepare for ImpactGlobal Logistics—June 2015What is Globalization Doing to the World of Logistics?Cross-Border Trade: Made in MexicoCargo Security: Protecting the Supply ChainPerishable Logistics: Cold Chain on a PlaneRisk Mitigation: Supply Chain Safety NetFTZ Basics & Benefits More related articles...