Things are Looking Up for Multistory Warehouses 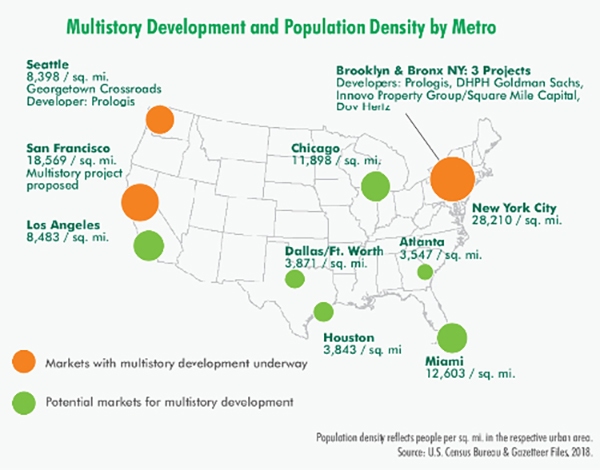 Multistory warehouses used to distribute e-commerce orders are popping up in densely populated U.S. metro areas, but conditions for developing the structures aren't as ideal in the United States as in Asia and Europe, finds a CBRE report.

The CBRE report pinpoints five multistory warehouses currently under development in the United States: Three in New York City, one in San Francisco, and one recently completed in Seattle (see chart).

The multistory warehouse trend is more advanced in parts of Asia and Europe, where populations are more densely packed and land prices are higher. U.S. land prices for industrial development have more than doubled in the past five years to roughly $30 per buildable square foot. Yet land prices and rents in cities such as Hong Kong, Tokyo, and London remain twice to three times more expensive than in U.S. cities.

"Multistory warehouses are an emerging phenomenon in the United States, but they might pencil out only in the densest neighborhoods and cities," says David Egan, CBRE's global head of industrial & logistics research. "We might need to see some additional adaptations that are common in Asia and Europe, such as smaller delivery trucks, which allow for tighter ramps and, in turn, smaller building footprints."