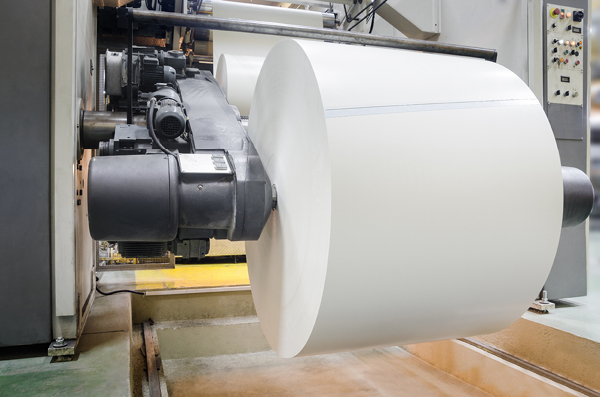 A TMS that is easy to use and meets the unique needs of all the company's divisions helps OVOL USA, a large supplier of paper, pulp, and specialty substrates, deliver timely, cost-efficient supply chain solutions to customers worldwide.

OVOL USA is one of the world's largest suppliers of paper, pulp, and specialty substrates. Eric Krizay, the company's vice president of corporate logistics, had been searching for a transportation management system (TMS) that would meet the unique needs of all the company's divisions. At the same time, he needed a solution that was straightforward to implement and use.

From its start nearly a century ago, when entrepreneur Harry E. Gould Sr. noticed an opportunity to supply the growing greeting card industry with domestic and international paper, OVOL USA has grown into one of North America's largest distributors of printing, publishing, and business paper. Now part of Japan Pulp and Paper, OVOL USA spans multiple divisions in North America and across the globe.

While many of OVOL USA's divisions are in the paper business, they have "different requirements, different needs, different types of products, and different customers," Krizay says.

The divisions historically operated independently. Each generated its own profit-and-loss statement and handled its own purchasing and transportation, among other functions. This made achieving visibility across the enterprise, as well as economies of scale, more difficult.

To start to remedy this, Krizay and his colleagues developed a central logistics division that was able to leverage OVOL's buying power. The new structure succeeded in both lowering costs and freeing employees to spend more time building their businesses, rather than on administrative tasks.

Finding a single TMS solution that would meet the needs of all divisions still proved challenging, however. In the approximately 10 years Krizay has been with OVOL USA, they've gone through three TMS solutions.

"It has been like Goldilocks and the three bears," he says.

The first solution was too small and handled only domestic shipments. While the second was backed by one of the industry's largest vendors, it was not user friendly. Employees had to navigate multiple clicks to complete many processes. The solution also was costly to operate and update; simply making a new bill of lading could run into thousands of dollars, Krizay says.

Customer service also left much to be desired. Changing the way a function worked "took an act of Congress," Krizay says.

The Search is On

Krizay looked for a solution that would offer visibility within the United States and overseas, and for shipments moving across ocean and air. It also needed to support all OVOL divisions, helping them operate as efficiently as possible.

After issuing a request for proposal, Krizay connected with about 20 companies. An arduous process, he notes, but implementing a TMS requires a substantial outlay of money and time, making thorough due diligence essential.

Many vendors claimed their solutions would handle the functions critical to OVOL's operations. Yet when Krizay probed deeper—say, asking them to demonstrate the steps needed to complete a process—it became clear many couldn't, at least not efficiently.

For instance, Krizay asked about the steps required to change a shipment from one carrier to another. In general, when this occurs, the first carrier needs to be notified not to make a pickup, so OVOL isn't incorrectly charged, and then the shipment needs to be moved to the correct carrier.

"It's a real-world challenge and happens all the time," he says. Yet some systems required an employee to call the original carrier, cancel the shipment, and then rebook it with the second carrier—cutting little time from the existing process.

Continuing his research, Krizay came across ShippersEdge, a Burnsville, Minnesota-based provider of multi-carrier shipping software and transportation management systems. The company met the qualifications outlined within OVOL's RFP, and Krizay added them to the list.

"When I was done with the first phone call, I knew where I wanted to go," he says. Ultimately, OVOL did choose ShippersEdge, and the two companies have been working together for several years.

ShippersEdge provides a suite of logistics tools, including a Tier 1 TMS that's the backbone of its offerings, says Joe Taylor, director of engineering with the company. The company generally works with mid-size to large companies across multiple verticals. Over the past few years, it has focused its solutions on providing end-to-end visibility and management of logistics, including inbound freight, ocean freight, last mile, and everything in between.

A main reason OVOL chose ShippersEdge was the system's user-friendliness. For instance, moving a shipment from one carrier to another was as simple as clicking a button that says "remove carrier." That action notifies the carrier's application programming interface (API) of the cancellation, and the API sends a return message saying that the carrier received the cancellation notice. Then, an employee enters the new carrier, and the system handles and sends the paperwork. "It takes literally two minutes," Krizay says.

Krizay also confirmed the system could manage, among other functions, international tracking and foreign currencies. He reviewed the reports the system could provide and checked whether OVOL could create its own reports. For instance, a multi-divisional report that shows orders and revenue by the day, week, and month, as well as month-over-month and year-over-year, has proved valuable.

Implementation of ShippersEdge occurred virtually and was the easiest of all three systems, Krizay says. Just several weeks passed from the time the two companies signed the contract until they'd completed some necessary system-building and integration.

One of ShippersEdge's core values is building software that's intuitive, Taylor says. To that end, it brings in fifth graders—usually employees' children—to experiment with its solutions when designing or modifying the user interface.

He and his colleagues observe the kids as they operate the software to determine if almost everyone can figure out how to, for instance, move a shipment. If it's clear they can't, the company adjusts the solution. This process has helped everyone learn how to make software that's accessible and intuitive.

One example: when designing the initial software, it became clear the kids were struggling to figure out how to return to the start button after they'd created a shipment. That prompted developers to focus not just on the workflow, but on guiding the user back to the home page.

To make all processes more intuitive, the designers included large tabs at the top of the interface for tasks like obtaining a rate quote and creating shipments. "This came from the discussions we had and watching the fifth graders utilize the software," Taylor says.

When ShippersEdge began working with OVOL USA, it adapted some of its software to provide visibility for logistics across all the company's business units. The system now can separate shipments and other data by business unit or division, while providing the parent organization with visibility to all units—a change that benefits every client.

Easy to do Business With

The ShippersEdge software is easy enough to use that new employees, assisted by online tutorials, can learn it within a few hours, Krizay says. OVOL also has been able to add functions and "not break the bank," Krizay says.

For example, at first, the feed between OVOL and ShippersEdge was one-way: customer service employees would enter an order and send it to ShippersEdge to be routed. To streamline the process even further, OVOL began moving carrier bills through its accounting software. Because they move directly, most match and automatically go to OVOL's accounting software to be paid, saving time and money.

Some customers of OVOL's divisions in Texas, which are larger and have their own delivery vehicles, require deliveries be completed by certain times, and some drivers there need to be placed on specific routes. Determining the routing used to consume hours each day. That has been cut to a few minutes, due to the algorithm ShippersEdge built that determines the route for each truck and driver, while working within the business rules.

Moving forward, OVOL plans to implement ShippersEdge's dock scheduler in several locations in Texas. As part of this, Krizay's team will place large screens in the warehouses, so employees can see what deliveries are coming in and going out, and at what time. Then they can have the right products and documents ready as soon as a truck arrives.

As important as its technology, ShippersEdge was "a refreshing company to deal with," Krizay says. Every Tuesday, Krizay, Taylor, and Tom Taylor, ShippersEdge's president, connect to talk over how things are going and any changes underway.

When Krizay suggests a change to the solution, Tom Taylor has an amazing ability to build on the idea and make it even more effective, he says. That kind of back-and-forth and customer service is "worth its weight in gold," he adds.

To find a transportation management system (TMS) that would work for OVOL USA's multiple divisions with varying needs, while providing visibility across the entire company. The installation and user interface also needed to be straightforward.

Partner with ShippersEdge, which provides a Tier 1 TMS, as well as quality customer service.

Management now has visibility across the organization's supply chain, while multiple processes have been automated and streamlined, saving time and money. This includes the payment of carrier bills and the routing of trucks and drivers, while following specific business rules. In addition, the solution was less expensive than what OVOL had used previously.

OVOL USA plans to implement ShippersEdge's dock scheduler in several locations in Texas. With this and the addition of large screens within the warehouses, employees will see the timing of inbound and outbound deliveries and can have the right products and documents ready as they're needed.