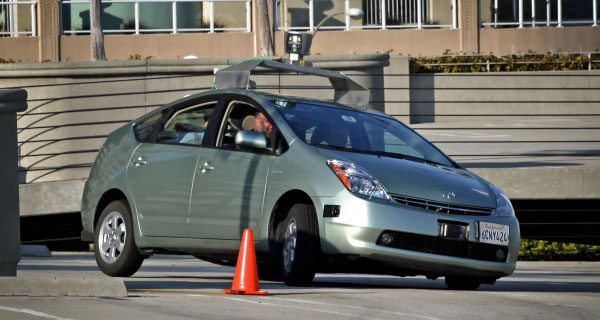 Driverless cars are one example of how the transportation and logistics sector is simulating reality to better understand the future.

The supply chain sector is increasingly adapting and deploying technology to better understand the unknown. Big data provides a wealth of information and historical precedent to benchmark and optimize current and future events. Modeling and design software similarly affords users the latitude to engineer and plan for potentialities before they happen.

There was one important caveat, however.

A human being rode shotgun, ready to take the wheel, in order to comply with various U.S. state regulations. That's a pretty good metaphor for where industry is at with autonomous locomotion: ambitious but guarded.

In Ann Arbor, Mich., a new cityscape of sorts is rising from the verdant woodlands along the Huron River.

The 32-acre site, colloquially known as Mcity, is quickly morphing into a Truman Show-like Hollywood backdrop, replete with make-believe buildings, fixed and variable lighting, changing traffic lights and patterns, different road surfaces—including a four-lane highway with on and off ramps—and a variety of remote-controlled cars, cyclists, and pedestrians to purposefully get in the way.

The University of Michigan's Transportation Research Institute (UMTRI), in concert with the state Department of Transportation and automobile manufacturers such as Ford, General Motors, Toyota, and Honda, will use Mcity as a controlled test site to study the feasibility of autonomous vehicles. The facility is expected to open in spring 2015.

The University of Michigan's endeavor invites automakers and other interests to test-drive vehicles in a more public setting, in hopes of accelerating the adoption of common standards across this emerging industry.

Mcity has a midwestern "pedal-to-the-grindstone" sensibility. It's an appropriate foil for the high-tech, high-flying playground of Silicon Valley—where the likes of Google, Apple, and other futurists are toying with prototypes under clandestine cover in near-perfect weather. Michigan's seasonality and UMTRI's openness provide more realistic conditions to test hypersensitive systems in a competitive environment.

While the idea of driverless cars—and drones for that matter—has captured mainstream imaginations, its impact in the freight industry is very real. Driver shortages, safety, and training are top-of-mind concerns around the world. Similar technology has already been widely tested in different scenarios. For instance, the mining industry is using driverless trucks at remote sites where safety is paramount.

Elsewhere, the European Union-sponsored Safe Road Trains for the Environment (SARTRE) project, conducted between 2009 and 2012, used radar, fixed lasers, and cameras to experiment with driver-led platoons of unmanned vehicles. In effect, a human-driven vehicle leads a convoy of autonomous cars or trucks. Jean-Paul Sartre's blushes aside, the implications for freight transport are considerable.

The appeal of "auto-motion" is tangible. Driverless cars, like drones, have a pop-sci audience that extends well beyond the transportation and logistics sector. But supply chain "modeling"—in its truest sense—is much more pervasive than that. In countless other examples, largely unseen, industry is simulating reality to better understand the future.

A few miles outside of downtown Fayetteville, Ark., the Sam M. Walton College of Business has repurposed a non-descript warehouse as a 10,000-square-foot retail format. The backroom warehouse and loading dock are "just" convenient fixtures. For all intents and purposes, the retail operations lab is a real store stocked with all kinds of brand name consumer goods.

University of Arkansas researchers are using the lab to study different consumer trends from shelf space line of sight and packaging to omnichannel strategies and RFID. It's where marketing and logistics converge.

Nearby Bentonville is another good example. It's a company town. That company just happens to be the world's largest retailer. Walmart uses Bentonville to pilot new retail formats—its Walmart to Go convenience store—as well as innovative strategies such as tethering distribution and fulfillment to larger supercenters in lieu of DCs.

In other instances, role-playing and simulation emphasize training. Port Revel in Grenoble, France, is the world's most unique port. It's a 13-acre man-made lake that caters to model ships. The port mimics real-world ocean currents and geographic features such as the Suez Canal and Cape of Good Hope.

Popularized by John McPhee's 1998 Atlantic Monthly article, the port is the epitome of transportation and logistics 'modeling.' The facility uses a fleet of manned models built at a scale of 1:25 to replicate natural conditions including harbors, canals, and open seas. The ships are equipped with bow and stern thrusters, and operational anchors. They behave like real vessels.

Since the late 1960s, Port Revel has helped train steamship captains and pilots from all over the world. Even at scale, the idea of having a déjà vu moment during a real-life crisis is compelling.

That's the notion that drives much of the modeling and simulation activity in today's supply chain. Outside of testing new concepts and innovations, companies want to create that déjà vu sensibility within their day-to-day supply chains.

Ultimately, there's no substitute for practice, especially when perfection is fleeting. In today's capricious world, even the mundane becomes muddled. Logisticians, of all people, know this well.

It took a decade but radio frequency identification (RFID) is finally living up to its hype, according to results from the 2014 GS1 US Standards Usage Survey, conducted by the eponymous standards organization.

On average, respondents note that 40 percent of items made by apparel and general merchandise manufacturers have RFID tags.

On average, respondents note that 47 percent of items received by apparel and general merchandise retailers have RFID tags.

Such parity suggests RFID adoption is nearing a tipping point.

"RFID is no longer just something proven in concept—it is providing tangible results for manufacturers and retailers, and offers the inventory accuracy that omnichannel retailing demands,"explains Dr. Bill Hardgrave, dean of the Harbert College of Business and founder of the RFID Lab, Auburn University.

Can You Dig IT?

Data analytics has become a huge growth market in the transportation and logistics sector. As companies and service providers improve how they gather information, there is equal need for analysis.

The supply chain analytics market will grow at a compound annual rate of 14.6 percent and reach $4.8 billion by 2019, suggests a report from Dallas research firm MarketsandMarkets. Asian Pacific and Middle East regions are expected to be big drivers in this growth.

The acceleration of big data across various industries is driving the global market, increasing data generation, forecasting accuracy, and awareness regarding the benefits of supply chain analytics solutions, according to the report.