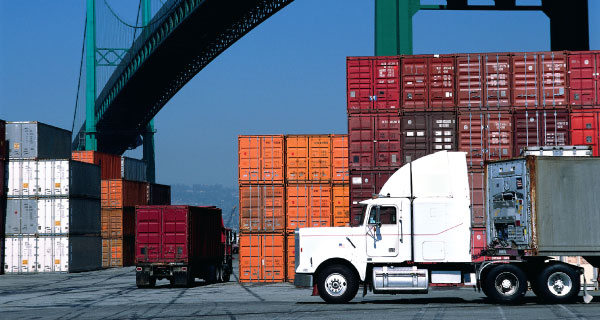 A Break in the Chain: Solving the Port Chassis Problem

When the Federal Motor Carrier Safety Administration (FMCSA) started enforcing its discursive Requirements for Intermodal Equipment Providers and for Motor Carriers and Drivers Operating Intermodal Equipment rule in December 2009, there weren’t enough containers flowing through U.S. ports to cause immediate alarm. Shippers and trucking companies were more concerned with finding boxes to move than the wheels to move them. Now that focus is shifting.

With so much discussion of a looming, yet-to-be realized capacity crunch for available trucks, a more compelling obstacle is the impact the FMCSA’s “Roadability Rule” will have on the supply and ownership of chassis at U.S. ports— and the trickle-down consequences for both port users and shippers.

In October 2010, both Maersk Line and Yang Ming announced they would no longer provide chassis for cargo container units at select U.S. ports, directing drayage companies to adopt new lease arrangements with third-party services. The carriers joined a growing roster of steamship lines including CMA CGM, OOCL, NYK Line, and Evergreen, among others.

The FMCSA’s mandate applies to intermodal equipment (i.e., ocean carrier chassis) interchanges for the purpose of repositioning and transporting containers over public highways in interstate commerce. Essentially, the rule specifies an additional inspection requirement for trucking companies. Before drivers prepare to move intermodal equipment over the road, they must comply with a list of pre-determined safety checks.

The new inspection requirements provided a spark for ocean carriers to divest a non-core part of their business— acting as an intermodal equipment supplier. But in a tepid trade environment, with demand and operational costs arcing in opposite directions, there was no shortage of motives.

As U.S. ports present a stage for this unfolding drama, and ocean carriers and local truckers assume their new positions and roles, they are collectively playing to a captive audience of shippers and consignees who have a considerable stake in its outcome.

To address the circumstances behind the current port chassis impasse, the consequences for shippers, and how industry as a whole is exploring long-term solutions to resolve imminent problems, Inbound Logistics caught up with David Bennett, vice president of Schneider Logistics, a third-party logistics provider based in Green Bay, Wisc.

IL: Was the decision that ocean liners would stop providing chassis equipment a consequence of the FMCSA’s Roadability Rule that went into effect in December 2009?

BENNETT: The FMCSA ruling had an impact, but it was likely an additional factor in the steamship lines’ decisions. This change was primarily a result of 2009 world trade volumes, the idling of merchant vessels along with containers and chassis, and subsequent initiatives by ocean carriers to drive out costs.

Chassis management is a great expense. Apart from the overall number of units needed to move containers, maintenance and repair is a significant issue. At the end of 2009, many chassis were placed into inactive stacks at the ports. When volumes increased and they were suddenly needed again, equipment had to be made roadworthy. Technicians were hired to perform this work and a lot of money went into accomplishing that.

One of the most important aspects of getting out of the chassis business is that steamship lines were held accountable for ensuring adequate, roadworthy chassis. If 30 containers needed to be delivered to a customer, carriers had the direct responsibility for supplying ‘the wheels’ to do that. This might require shipping chassis into markets where there were shortages, or having maintenance and repair teams work overtime to ensure containers had a corresponding set of wheels.

If there were shortages, the customer would go directly to the steamship line. In turn, the liner would be responsible for finding a solution. At the same time, port authorities would complain to carriers about chassis availability and ‘roadability.’ A lot of cost was tied up in accountability.

In the future, steamship lines will not have to deal with this. If 30 containers need to be delivered on a given day, but only 20 chassis are available from vendors, the shipper is now directed to the trucker to find a solution. This major paradigm shift is not being broadcast very loudly by the steamship lines. And it raises a number of questions.

If a drayage partner can’t find a serviceable chassis in Savannah to transport a shipper’s container, does that mean the customer will expect it to send a truck to Jacksonville, find a chassis, and return to Savannah to complete a five-mile haul to a local distribution facility? Who will pay for this sojourn?

Some vendors offer chassis rentals, but they don’t have to meet customer obligations or specific service expectations for ensuring equipment is locally available.

IL: As the liability and responsibility for securing and inspecting chassis shifts from ocean carriers to trucking companies, how are shippers impacted?

BENNETT: Many shippers already expect their overall costs won’t be reduced any time soon. So if a trucking company has to add a chassis rental expense, beneficial cargo owners will begin thinking ahead about future ocean contracts and making sure chassis costs are removed from their international shipping rates.

Most drayage companies have already begun submitting letters to customers detailing an extra charge to the base rate for the chassis lease/rental. Shippers understand and accept the basis of the request— knowing that it was not initiated by trucking companies.

IL: Is there concern that a chassis shortage could impede port flows in the near term?

BENNETT: It depends on the definition of near term. The issue will only manifest itself during peak seasons when chassis availability is tight. The real concern is not the shortage, but the responsibility for rectifying the situation and bearing the additional costs.

IL: Some ports have already developed chassis pool services that drayage companies can use to move ocean containers. Moving forward, will chassis pooling become the model for industry?

BENNETT: The neutral chassis is an industry benefit. Still, the change has effectively doubled the amount of information that truckers must track and trace. It’s almost like introducing a second business process into the system to ensure all chassis vendor invoices are valid, all chassis are turned in exactly when the customer stops using them, and all billing for maintenance and repair is traceable to the appropriate party. Execution will be challenging.

For example, if a customer in Atlanta offloads a container and chassis on Wednesday at 1 p.m., the ‘clock’ for chassis charges would end that day. A drayage truck, returning from Atlanta, cannot get to the chassis vendor in Savannah before it closes on Wednesday afternoon. So the hauler returns the container Thursday morning and now has to pay one extra day for a chassis rental that the customer won’t cover. Agreements can be worked out with each shipping customer, but exception management and documentation become dominant processes.

IL: Any other plausible solutions?

BENNETT: Some customers have studied the impact of these changes and concluded that the trucker partnership— as the responsible party for chassis procurement and peak season availability— is too fragile a business model to ensure uninterrupted product flow.

Shippers may begin to pursue their own contracts with chassis providers, then direct drayage companies to use equipment provided by those vendors to manage their shipments. The customer is likely to ask for volume agreements at a lower per-unit cost. The chassis vendor, knowing it will have continuous equipment utilization for a certain number of days, will probably agree to such an arrangement.

No one is really talking about this as a future outcome. But if peak seasons come and go, and truckers are not able to solve the chassis availability needs for desperate customers, such a model might be more widely adopted.

Is chassis availability at ports a concern for your company? What are you doing to address this pending problem? Inbound Logistics would like to know. Please email us.

Beset by difficulties managing quality control among suppliers ever since it outlined plans to produce the 787 Dreamliner, Boeing is now addressing the problem head-on in hopes of getting the first composite-plastic airliner off the ground without much further delay.

The aircraft manufacturer recently appointed Mo Yahyavi as its new vice president of supply chain management. Yahyavi, who was formerly Boeing’s 747 program chief, is tasked with assessing and enhancing supplier rate readiness, manufacturing and quality discipline, and management systems— initially focusing on Rome, Italy-based Alenia Aeronautica, which has been partly blamed for the three-year lag in delivering the Dreamliner jet.

In August 2010, Boeing re-inspected its fleet of Dreamliners after discovering flaws in horizontal stabilizers made by Alenia. This followed an earlier production stoppage due to concerns with the Italian supplier’s composite-fuselage sections.

Over the past few years, Boeing has run into a series of problems with the supplier-driven production system that was specifically created to build the jet. The plane-maker relies on partners around the world to build complete sections of the aircraft, which are then flown to Boeing’s factory in Everett, Wash., for assemblage.

Outsourcing Contracts Up For Grabs

Companies that outsource technology and business processes are getting antsy about their existing contracts, according to TPI, a Houston-based sourcing advisory firm. There has been a sharp increase in the frequency of contract restructurings over the last fiscal period, but a delay in the outsourcing market’s gradual recovery due to continued weakness and uncertainty in the global economy.

The third quarter 2010 Global TPI Index, which measures commercial outsourcing contracts valued at $25 million or more, recorded total contract value (TCV) of about $14 billion, down more than 20 percent from both the previous quarter and the same period last year.

Restructuring activity, which includes renegotiations, renewals, and extensions of existing contracts, totaled $6.8 billion during the third quarter, or 48 percent of the global market. Year to date, restructurings have accounted for 34 percent of overall TCV, compared with typical 20 percent turnover during the past three years.

TPI attributes the uptick in restructuring activity to three market factors: economic conditions that have caused companies to be tentative about new outsourcing adoption; existing outsourcers that are increasingly attracted to quicker returns and lower risk promised by restructurings; and longer-term contracts now coming up for renewal.