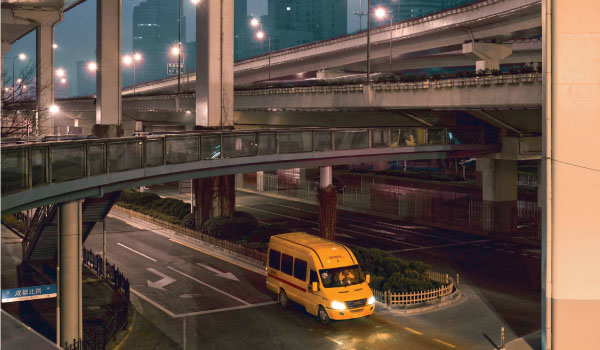 DHL challenges supply chain professionals to rethink the logistics network in urban areas and come up with creative approaches to sustainable, global, and efficient transportation.

With the global population expected to soon surpass seven billion, urbanization is an inevitable reality and challenge for supply chains. Where consumerism is concentrated, infrastructure and capacity are often constrained, making it difficult to move product in and out of congested areas.

"For the first time in history, more than half of the world's population lives in cities and metropolitan areas. Rapid urbanization is shifting the locus of global economic power," according to a recent Brookings Institution study, Global Cities: The Drivers of Economic Growth.

In China, for example, the urban population has reached the 50-percent mark, up from 20 percent in 1982, reports the Washington, D.C., public policy think tank. In India, more than 350 million people now live in cities, and that number is expected to reach 590 million by 2030. Similar demographic shifts are happening elsewhere around the globe.

One key takeaway is that shippers, carriers, and service providers are operating in an increasingly urban environment, and therefore have to adapt transportation and distribution strategies accordingly.

It is this impetus that recently led DHL to introduce a new global solutions and innovations (DSI) division that is spearheading a "City Logistics" competition.

The competition's objective is to drive innovation, then share best practices among shippers and partners in cities around the world.

"Our 30 electric and 50 hybrid electric green delivery fleet in New York City is one example of best practices in city logistics, as are some of the technologies we use for route management," says Robert Mintz, manager of communications for DHL Express.

DHL has also been piloting new projects and services in other parts of the world. For example, it operates urban consolidation centers in Mexico City and London; rolled out Smart Truck technology in Germany and India; and developed a Packstation solution in Germany that provides 24/7 self-service parcel collection and dispatch.

Have a great idea for the City Logistics contest? Entry details are here:

Ford Motor Company has more than tripled the size of its greenhouse gas emissions collecting and reporting program in an effort to better understand and measure suppliers' carbon footprints.

The automotive manufacturer is surveying the energy use and carbon emissions of 128 global suppliers (up from 35 in 2010) that account for nearly 60 percent of its $65 billion annual purchases. The expanded group includes suppliers that provide vehicle production parts and components, information technology, and logistics services.

One key finding from the 2010 responses was variability in supplier readiness to measure and report greenhouse gas emissions—80 percent of respondents track their carbon emissions, while 50 percent externally report their emissions. Feedback provided insight into risk management opportunities for the broader automotive supply base.

In addition to establishing a baseline for its own supply chain carbon footprint, Ford is helping the automotive industry and Tier 1 suppliers develop a guideline for estimating, collecting, and reporting manufacturing facility-based greenhouse gas emission data as part of the Automotive Industry Action Group (AIAG). Beyond that, the manufacturer is one of two automotive companies (along with Rolls-Royce) participating in the Carbon Disclosure Project, a global partnership that aims to standardize green best practices across multiple industries.

Three quarters of U.S. manufacturers see supply chain management (SCM) as important for the next five years, according to The Next Generation Manufacturing Study commissioned by the American Small Manufacturers Coalition, a trade association based in Washington, D.C.

However, the study, which surveyed 824 manufacturers, also finds that despite its increasing importance, only 29 percent of companies believe they are at or are progressing toward world-class SCM status.

In addition, the study reveals a significant split in the quality of supply chain management between small and large organizations. Twenty-five percent of small manufacturers—businesses with less than $10 million in annual revenues—say they are at or nearing world-class status, compared with 41 percent of large organizations (those with annual revenues in excess of $100 million).

Importance to Your Organization's Success Over the Next 5 Years

Source: The Next Generation Manufacturing Study

The state of the global outsourcing industry is a tale of three continents, with North American 3PLs faring better than their European counterparts and Asian service providers catching up to speed at pace, according to the 18th Annual Survey of Third-Party Logistics Providers, sponsored by Penske Logistics and authored by Dr. Robert Lieb, professor of supply chain management at Northeastern University.

The study analyzes responses from 36 3PL CEOs across North America, Europe, and Asia-Pacific whose companies were responsible for generating approximately $58 billion in revenue in 2010.

Key takeaways from this year's survey include:

Despite an uncertain economy and sluggish consumerism, motor freight carriers have shown signs of progress in 2011, according to TransCore's second-annual Carrier Benchmark Survey. Carriers' monthly revenue was $1,607 (10 percent) higher per truck on average than in 2010, reports the Portland, Ore.-based load board/freight solutions company.

The increase is primarily due to a corresponding 10-percent uptick in per-mile rates. Among other survey highlights:

The legend of the Edmund Fitzgerald, a freighter that sank during a storm on Lake Superior in 1975, has come to symbolize the fate of the Great Lakes shipping industry—a once-thriving trade swallowed by globalization. But the Great Lakes-St. Lawrence Seaway navigation system is still a relevant part of the U.S. economy, according to a new study conducted by Pennsylvania-based trade consultant Martin Associates, on behalf of U.S. and Canadian shipping and government authorities.

"This report validates what we have long contended—that the Great Lakes-Seaway navigation system is vital to the continued prosperity of the region," says Steven A. Fisher, executive director of the American Great Lakes Ports Association. "A multitude of maritime jobs—on land and at sea—work together to help ensure that goods and services are enjoyed by a vast customer base."