Shippers need to take steps to make sure packages arrive safely at their destinations this holiday season. Sixty-four percent of consumers have received a damaged package, according to State of Online Shopper Expectations and Actions, a recent survey by shipping services company OSM Worldwide. The study shows that 75 percent of online shoppers will share their frustrations over a damaged package with friends and family, and 87 percent will call customer service to complain.

Leaving consumers unsatisfied about the shipping process can affect future sales. Word of mouth is the primary factor behind between 20 and 50 percent of all purchasing decisions, the study shows.

"When consumers receive damaged packages, even if the damage is not the company's fault, the brand can take a hit to its reputation," says Gaston Curk, CEO of OSM Worldwide. "Our data shows that three-fourths of consumers will broadcast their frustration to their social network—their friends and family.

"Reaching an even larger audience, 18 percent of consumers would share their frustrations to social media," he adds.

"It is difficult to quantify the damage to brands, but if large numbers of consumers receive damaged packages from the same brand, the negative perception of that brand can amplify quickly, both by word of mouth and through social media," Curk says.

To avoid this type of negative publicity, shippers need to make sure they use quality shipping providers. "The best thing shippers can do is have an open line of communication with their shipping partner and a proper tracking system in place," Curk says. "If there is a problem with damaged packages, retailers and brands that have a good relationship with their shipping partner should be able to find out fairly easily where and why the problem is occurring.

"A good shipping partner will know how to operate quickly and efficiently, and if brands communicate order spikes to them ahead of time, they can prepare for the increase in volume and mitigate the risk that comes with high-volume shipping, either by hiring on additional help or by opening up additional shipping lanes," he adds.

A wrecked holiday package has the potential to ruin a consumer's holiday, and in the end, the blowback on your company's brand just isn't worth it. Take another look at your business's shipping processes and make sure your organization isn't labeled a Grinch all over Facebook this peak season.

Hey, Where Did All This Stuff Come From?

If companies are to effectively manage their spend, they must procure in the most efficient way possible. But, as it turns out, even many procurement professionals don't understand the purchasing processes at their own companies, according to a survey by technology provider AmeriQuest Business Services.

It gets worse. Fifteen percent of respondents who are directly involved in procurement say they don't know which department manages procurement at their organization—varying answers spread the responsibility across finance, operations, and IT departments. In addition, one-third say they don't know who to go to for final sign-off rights to a purchase.

While these numbers are not majority figures by any means, it's clear that many companies may be hemorrhaging money in the form of bad procurement practices. "When there is confusion about procurement procedures, a company is not as profitable as it could be," says Reginald Peterson, director of indirect products at AmeriQuest Business Services.

When a company has no procurement department, the odds that the business will overspend in its purchasing climb exponentially. Procurement can be a complicated endeavor, and shouldn't be left to other departments. Considering the direct impact on the bottom line, individuals who have the correct training to get the job done most efficiently should handle procurement.

Survey results help explain why the procurement process may not be going as smoothly as it should. 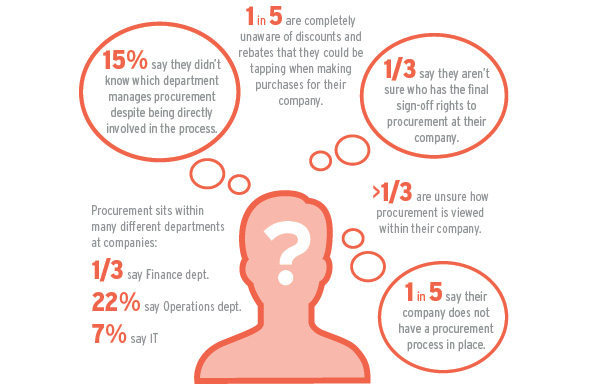 The prototype, dubbed Aircrew Labor In-Cockpit Automation System (ALIAS), isn't meant to remove the human equation, however. ALIAS only replaces the second pilot, reducing demand for human pilots while still having one onboard for emergencies and decisions that are not easily quantified. ALIAS' drop-in design allows it to be implemented into any plane or helicopter—even old, pre-electronic aircraft. So far, the prototype has completed successful test flights in a Diamond DA-42, a Cessna Caravan, and a Bell UH-1 helicopter.

"ALIAS enables the pilot to turn over core flight functions and direct their attention to non-flight related issues such as adverse weather, potential threats, or even updating logistical plans," says John Wissler, vice president of research and development for Aurora Flight Sciences.

ALIAS faces a multitude of regulatory hurdles, even though the concept of computers flying planes isn't exactly new. Commercial passenger and cargo planes already run on autopilot for the majority of flights. Some can even land automatically in bad weather where visibility is low. However—as any company that was hoping to deliver packages with drones in the near future can tell you—the FAA takes its time providing regulations for new disruptive technologies. So it may be awhile yet—officials working on the technology estimate at least some components will be in use within the next five years—before robots fly your cargo to its destination.