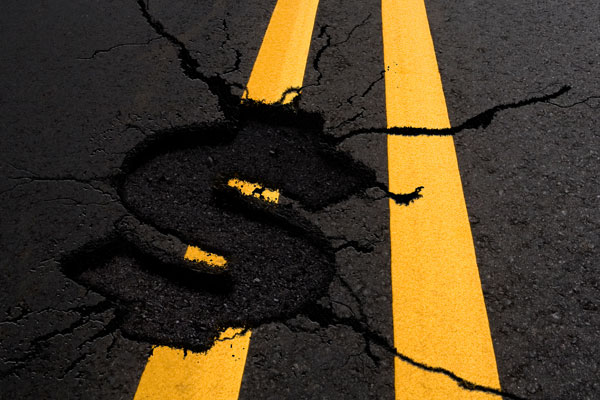 Drive any measurable distance across the United States and you’re bound to run into “Schneider Eggs”— trucker slang for sometimes-scrambled orange construction barrels. As much as road construction is an obstacle to efficiency and timeliness, it’s also a sign of progress, investment, and your tax dollars at work.

Ironically, the problem is a lack of construction barrels slowing down drivers and hastening government to stimulate infrastructure development, according to the U.S. Chamber of Commerce’s first-ever nationwide and state-by-state Transportation Performance Indexes (TPI).

The report rates infrastructure performance on both the national and state levels, with the goal of meeting three primary objectives:

The Chamber of Commerce’s study exposes a significant decline over the past seven years in how America’s transportation infrastructure is serving the needs of domestic commerce, international trade, and the overall U.S. economy (see chart, right).

On the national scene, the TPI combines indicators of supply (availability), quality of service (reliability, predictability, safety) and utilization (potential for future growth) across all modes of passenger and freight transportation between 1990 and 2008 to measure U.S. transportation system performance.

For 2008 (the last year data is available) the national index reached 51.24, which shows a slight improvement from 50.74 in 2007. But the moving average, which levels annual variations, reveals a clear downward trend from 2003 to 2008. Over the course of the measurement period, the index increased only six percent while the U.S. population expanded 22 percent, passenger travel grew 39 percent, and freight traffic jumped 27 percent.

“The performance of the nation’s transportation system is not keeping pace with the rate of growth of the demands on that system,” says Thomas J. Donohue, president and CEO of the U.S. Chamber of Commerce. “In fact, a 10-point improvement in the new national transportation index could generate three percent more growth in the nation’s Gross Domestic Product (GDP).

“However, the transportation index shows that from now through 2015 there will be a rapid decline in the performance of the system if we continue business as usual,” he adds. “Right now we’re on an unsustainable path.”

On the state level, North Dakota and South Dakota rank highest, while the District of Columbia and New Jersey bring up the rear. The study reveals that higher population growth rates and densities are generally associated with lower index value. In turn, these states experience significant pressure in terms of population growth, high levels of development, and dealing with limited access to or aging infrastructure.

“The gap between the national index and the best performing states is 20 points wide,” adds Donohue. “We’re leaving $1 trillion on the table in GDP by not getting the most bang for the buck out of our transportation system. If we don’t head off that decline, we’re taking money out of every American’s pocket.”

International scheduled airfreight traffic showed a 22-percent improvement in July 2010, according to recent statistics from the International Air Transport Association (IATA). While the recovery in demand has been faster than anticipated, it has now entered a slower phase.

During the second half of 2009, demand rebounded at an annualized rate of 28 percent; in the year to July, the annualized growth rates had dropped to 17 percent, but this is still considerably above the industry’s traditional six-percent growth trend.

The two-speed recovery continues to see weak growth by European carriers of 12 percent in July, less than half the 25-percent increase by Asia-Pacific carriers or the 27-percent growth recorded by North American carriers.

Bisignani reiterates the need for a regulatory structure that facilitates consolidation across political borders. The industry has more than 1,000 players with only limited opportunities to consolidate as a result of the antiquated bilateral system’s restrictions on ownership, he says.

For many small businesses, the challenge of applying as a potential supplier to large companies is fraught with prohibitive investments in time, money, and expertise. Varying standards make it difficult to pursue business with a single large company, let alone multiple global companies.

But a group of large businesses that includes AT&T, Bank of America, Citigroup, IBM, Pfizer, and UPS has devised a new process that allows small and medium-sized businesses (SMBs) to more easily sell goods and services to global companies, potentially leading to the creation of new jobs and economic growth.

Led by IBM, the consortium is developing the Supplier Connection Web site, an online portal that accelerates and streamlines the application process leading to increased contracting with SMBs. The companies have also agreed to standardize and simplify the application process required for qualified lower-tier U.S. suppliers. A single, streamlined electronic application allows smaller vendors to complete a form once to potentially become suppliers with multiple participating companies.

Expected to launch in the first quarter of 2011, the Supplier Connection Web site will also enable SMBs to expand their global presence beyond U.S. markets, leveraging the geographic breadth of larger companies. Small suppliers can learn from, collaborate with, and sell to each other so that they can become more competitive and successful. For participating companies, the portal provides a mechanism for sharing valuable business information with innovative companies that can generate new products and services.

Ocean Volumes Rise…And So Do Rates

Recent news that steamship lines such as Maersk, OOCL, and MSC are pushing through general rate increases (GRIs) on transatlantic cargo in fall 2010 is a sign that markets are stabilizing and capacity is turning over more quickly to meet growing demand.

Maersk, which posted a half-year profit of US $1.2 billion on container activities, reports that while the Atlantic markets have stabilized, rates remain unsatisfactory.

A number of carriers, including Maersk, NYK, and MOL, introduced substantial GRIs on transatlantic trades in July 2010, while German container carrier Hamburg S√ºd imposed a GRI of US $150/TEU and $300/FEU on cargo moving between the U.S. West Coast and Canada to Europe in September 2010.

Maersk reports volumes on the transatlantic routes increased by four percent year-on-year in the first half of 2010. OOCL, which launched a new transatlantic service in October 2010, reveals that volume growth is up almost six percent in the second quarter compared to the first.

Compared to other modes that are still struggling to maintain buoyancy amid shifting economic tides, the ocean trade’s recovery is telling. Carriers have become more effective at managing capacity. Apart from idling vessels and re-aligning service strings and frequencies, the slow-steaming trend, which carriers adopted to reduce fuel costs, has found anchorage among shippers as well.