WMS Gives the Gift of Visibility 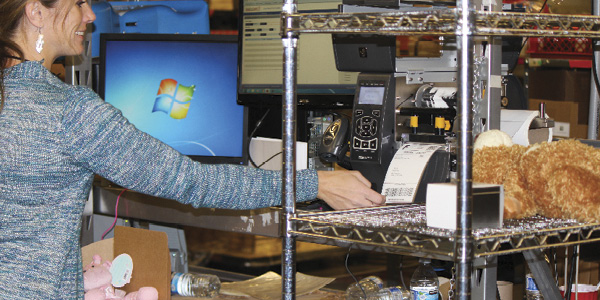 SendOutCards, an online greeting card and gift provider, started out the same way many companies do—in the garage of its founder. In 2005, Kody Bateman, founder and chief executive officer, launched a grassroots effort to help local businesses find creative and personal ways to thank their clients and mark special occasions.

Its card business expanded, and customers began asking if they could add "a little something extra" along with their cards. In 2007, the Salt Lake City-based company responded by offering gift cards and, soon after, added small packets of brownies, chocolates, and cookies. The company started with five product SKUs, and today offers more than 1,650 SKUs on its gift list.

To date, SendOutCards has delivered 100 million cards and three million gifts worldwide. Each day, the company ships an average of 60,000 cards, and anywhere from 1,500 to 3,500 gifts. Nearly 70 percent of the company's card orders are business-to-business transactions, and gifts, costing between $5 and $150, are included with about five percent of total card orders, says Jerame Schultz, SendOutCards' vice president of operations.

The company also claims to be one of the fastest growing network marketing companies in the world with approximately 60,000 distributors—individual business owners who use SendOutCards' platform as a personal financial vehicle to help other people follow through on card and gift prompts marking birthdays, anniversaries, or other life events.

"Originally, we were focused on the personal touch," says Schultz. "SendOutCards is not a site where people order something for themselves. It's where someone makes a heartfelt card for someone else, and attaches a small gift.

For many years, SendOutCards handled the volume and growth influx manually, and based its workflow mostly on paper-centric fulfillment processes.

Customers picked and customized cards from SendOutCards' catalog, and could choose fonts or personalized handwritten signatures. Workers would access the database as orders came in, print the cards one at a time, and cut them to size. Gift additions were noted on the back of the card, and workers collected items off the shelf. Cards and gifts were then stuffed into envelopes and shipped off.

Rapid growth came with a price, however. SendOutCards discovered its limits around 2013. To capitalize on its booming business-to-business segment, the company augmented its service with a multiple gift-giving option. Doing so also immediately increased supply chain complexity, and strained the existing order fulfillment processes.

"When we launched the multiple-gift service, we started to see the negative impact on quality control and accuracy," says Schultz. "It became logistically challenging to match card and gift orders."

Although the company had supplemented its maturing card business with printers able to produce hundreds of cards faster, the multi-gift option opened the door to greater customer personalization, and that, in turn, required more careful fulfillment practices and greater flexibility.

Under the single-gift system, for instance, a SendOutCards customer could run a business campaign with 100 thank-you cards, and add a two-brownie packet to each card as a gift; users could change the name of the end customer receiving the card to make the greeting personal, but everyone would receive the same gift.

The multi-gift system changed these dynamics. With the multi-gift option, SendOutCards users could now add a second gift to some orders, or swap out the chosen gift for another one. For example, customers running a 100-card campaign could add a second additional gift, say, a token along with the originally ordered brownies for special clients, or send cookies instead of brownies to other clients.

The idea of a third-party technology solution won favor as the company stretched its manual, paper-based fulfillment practices, and struggled to accurately match card and gift orders. SendOutCards needed to expand its operational capacity in a more automated way while keeping the personal touch customers had come to appreciate and continuing to grow its core business services. Real-time visibility into its end-to-end order fulfillment process rose to the top of the priority list.

The same year SendOutCards dove into multi-gift orders, Kirk Anderson received a birthday gift from his mother. The card featured a picture of Anderson, and his mother thought her son might enjoy a few brownies, so she included a small gift package as well. Anderson's mother ordered the card and gift from SendOutCards.

"I remember getting that card and thinking, 'Wow. They had to personalize the card, and then attach these brownies, which are perishable, to the order," recalls Anderson, vice president of channel sales for Snapfulfil. "I wondered how they did that, and what fulfillment processes they used. Maybe they could use something like Snapfulfil."

Following a hunch in early 2014, Anderson searched for SendOutCards executive profiles on LinkedIn, and cold-called company leaders to build connections and understand its business model. After several conversations with senior-level decision-makers, Anderson learned that SendOutCards was growing rapidly, and was getting to a point where a WMS solution soon would be a to-do priority. But SendOutCards wasn't quite ready when Anderson called.

Anderson kept SendOutCards on his call list, and SendOutCards kept Snapfulfil in mind as executives assessed IT needs and looked for cost-effective ways to improve order fulfillment efficiency and visibility.

SendOutCards greenlighted the Snapfulfil implementation in the fall of 2014, and the rollout started in early 2015, says Anderson. SendOutCards set a soft go-live date for spring 2015, building in enough time for possible delays coinciding with busy holiday peaks, such as Valentine's Day and Easter, when card and gift orders increase and staff energy is redirected.

"We saw this as an opportunity to pinpoint areas where we could do better," says Schultz. Sometimes, SendOutCards targeted specific practices to manage and improve, while other times the WMS identified unknown shortfalls, including the ability to track damaged goods or report employee purchases.

Snapfulfil's WMS suite had several features SendOutCards found appealing. Among them were real-time visibility of both inventory and orders, optimization of the putaway and picking process, and a pre-shipping verification scan that improves overall order fulfillment accuracy.

One outcome was an improvement in filling orders. Previously, about 15 to 20 people fulfilled far fewer orders. With Snapfulfil, 12 people can now fill even more orders with fewer errors because of the improved end-to-end order and inventory management capabilities, says Schultz, adding that the company's order fill rate improved by 43 percent and duplicateshipmentshave been eliminated (see sidebar).

This workflow improvement comes in handy during SendOutCards' busiest season, which is typically November and December. The company easily handled a peak day of 5,212 holiday gift orders during the 2015 Christmas season, and is looking forward to breaking the 10,000-order mark.

Inventory management has also gotten easier, particularly when it comes to tracking perishable items such as brownies, SendOutCards' top-selling gift. With Snapfulfil, the company now completes month-end inventory counts in half the time, and is able to track an item's full movement from the time SendOutCards places an order with its suppliers to delivery to the end recipient.

"We source lots of fresh, locally made gourmet food, and receive one or two pallets of brownies every day," Schultz adds. "The way we managed this before was the old 'stick your thumb out in the breeze' trick. We based orders on sales projections, but we didn't really know how much inventory we needed or had.

"Snapfulfil helped us with that," he adds. "It showed us where we were getting in trouble, and when we didn't need as much inventory."

An unexpected side benefit was freed-up real estate on the back of the printed card, where SendOutCards previously listed gifts attached to the order. Now, a 2D barcode that works like a QR code contains the total order information and can be easily accessed with a scanner. Because the barcode is placed on one corner of the card, the middle section is available for customers to add logos or other branding material, customization options not previously available.

"We're still working through some things and areas we can improve on," concludes Schultz. "But Snapfulfil has helped different functions within the company to communicate with one another, and has given us a better picture of what is happening with our orders. It has created transparency throughout our operation."