Mission
The Port of Long Beach will be the global leader in operational excellence and environmental stewardship.

Mission
The Port of Long Beach is an international gateway for the reliable, efficient and sustainable movement of goods for the benefit of our local and global economies.

Value Proposition
Our customers choose the Port of Long Beach because we are the most reliable, most cost-effective and greenest gateway for the movement of goods to and from America’s major consumer markets and producers. 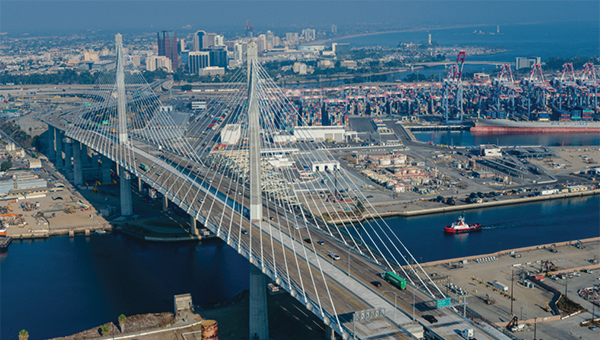 The Port of Long Beach is a global leader in operational excellence and top-notch customer service, moving cargo with reliability, speed and efficiency—making it the premier U.S. gateway for trans-Pacific trade.

As the nation’s second-busiest container seaport, the Port of Long Beach handles trade valued at $170 billion annually and supports 2.6 million trade-related jobs across the United States, including 575,000 in Southern California and 1 in 5 jobs in Long Beach.

Spanning 3,200 acres with 31 miles of waterfront, 10 piers, 66 post-Panamax cranes and some of the deepest berths in the country, the Port’s world-class facilities can accommodate the largest shipping vessels in the world. Goods moving through the Port originate in or are destined for every U.S. congressional district.

With a keen eye toward building a successful and sustainable future, the Port is pursuing long-term capital improvement projects. In 2020, the Port opened a new bridge built for the modern era of shipping and goods movement. In 2021, the Port will complete the final phase of the world’s most advanced container terminal.

In the next 10 years, the Port is planning $1.7 billion in modernization projects, to further prepare for the demands of global trade. Plans include investing $1 billion in on-dock rail projects, aimed at substantially increasing reliability, adding capacity, strengthening competitiveness, improving speed-to-market and allowing for the rapid movement of cargo throughout the harbor.

By operating Foreign Trade Zone 50, the Port of Long Beach lessens the impacts of tariffs and eliminates Customs clearance delays by having shipments delivered directly to qualifying businesses within Orange County and parts of San Bernardino and Los Angeles counties.

Customers choose the Port of Long Beach for the most dependable, cost-effective and fastest delivery of goods in the world, along with the strong relationships it maintains with industry, community, environmental advocates and partner agencies. In 2020, industry leaders named it “The Best West Coast Seaport in North America” for the second consecutive year.