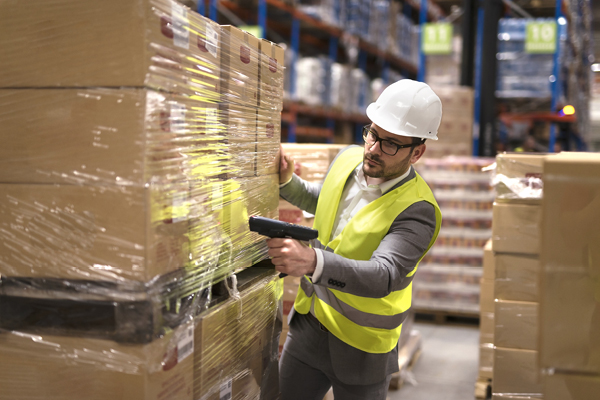 Demand volatility coupled with capacity shortages. Lead times stretching out weeks, even months. Congestion at ports worldwide. What can shippers do to keep their supply chains moving? Plenty.

Tuesday, February 1, 2022 is a date supply chain managers will want to mark on the calendar. This date—the day of the Chinese New Year—is when many industry experts estimate the disruptions and delays currently upending global supply chains will finally start to dissipate.

While the shortages of cleaning and paper supplies prevalent during most of 2020 have largely abated in many countries, numerous supply chain challenges remain. The pandemic showed how tenuous many supply chains already were.

"A lot of companies were pushed to their limits, so of course this is what happened," says Ethan Frisch, co-founder and co-chief executive officer with Burlap and Barrel, which provides spices sourced directly from farmer cooperatives and small farms. "It was on the verge of happening anyway."

In early summer 2021, when many countries loosened restrictions around COVID, they also unleashed pent up consumer demand, says Adam Hill, president and COO of logistics consulting firm Scarbrough International. That has resulted in lead times stretching six to nine months out, or into early 2022, when some semblance of normal might return, he adds.

The pandemic created something like a "game of musical chairs," says Hitendra Chaturvedi, professor of supply chain management at Arizona State University.

When the lockdown started, many empty shipping containers remained where they were.While Asia opened up before many other regions, it had few shipping containers, many of which remained locked in pandemic-hit countries.This "artificial container shortage boosted prices," Chaturvedi adds.

Then, there are the multiple one-off disruptions. In March 2021, the Ever Given, along with its approximately $1 billion cargo, remained stuck in the Suez Canal for nearly a week. A few months later, a COVID-19 outbreak at China's Port of Yantian led to a six-day halt of export containers. According to one report, more than 90% of the world's electronics move through this port.

The percentage of "blank sailings," in which carriers skip a port, averaged between 20 and 67% through mid-June 2021 for the three major alliances, according to an analysis by project44.

"All these challenges are because demand is outpacing supply to such a degree that there isn't much room for any slack should a sudden disruption occur," says Nick Marro, lead analyst, global trade, with the Economist Intelligence Unit.

Some steps shippers traditionally take to avoid congestion have lost effectiveness. For example, congestion at the Port of Los Angeles prompted some carriers to move to the Port of Oakland. However, they weren't alone.

"You can pull these levers for so long, but everyone else is also pulling them," says Brian Whitlock, senior director analyst with Gartner. The traffic jams simply shift from one place to another.

However, the following steps can help.

Many tools that provide visibility to supply chain risk, like machine learning and artificial intelligence, have advanced by leaps in the past 12 months.

Visibility allows supply chain leaders to decide when to re-route inventory to minimize or counteract delays. "It allows you to make decisions based on facts," says Robin Jaacks, senior vice president, international growth, with project44.

Visibility also provides a handle on risk across the supply chain network. For instance, organizations can plan how they will obtain parts if an earthquake strikes their critical suppliers.

Greater visibility into inbound inventories and port congestion also enables companies to assess the downstream impact delays might have on their distribution and labor planning, as well as the availability of inventory, says Andre Luecht, global transport and logistics vertical practice lead with Zebra Technologies. Supply chain leaders can act to minimize disruptions and meet customer demand.

Facing lengthening delays in ocean transit, Frisch began shipping a portion of Burlap & Barrel's inventory via air. The volumes were enough to tide over the company until the larger ocean shipments arrived.

With the delays in some ocean freight, "air becomes more competitive and a necessity at some level," Hill says. For example, if container lead times are about 40 days, and a company has enough stock to last 30 days, it can use air to ship enough inventory to cover those last 10 days.

When considering air travel, communication between the shipper and logistics provider is critical, Hill says. Services can range from next-flight-out to economy flights that may not occur for more than a week. The flight booked should address the challenge at hand.

Breaking larger shipments to smaller containers boosts the likelihood at least some of the products will move, Schulze says. For instance, critical shipments may be able to move with less-than-truckload (LTL) carriers.

With critical shipments, it also makes sense to explore premium transportation offerings, Schulze says. These cost more but are another way to move products more quickly.

"Look at geographic diversification," suggests Jason Alexander, national manufacturing sector leader with consulting firm RSM US. Consider whether another country could be a source for raw materials or components. While that's not always an option, it's worth exploring ways to diversify a supply chain.

To combat delays in Burlap & Barrel's supply chain, Frisch sought to partner with additional farmers. In all, Burlap & Barrel boosted its supplier base by about 20%.

A growing number of supply chain organizations are expressing interest in again manufacturing in the United States, says Michelle Comerford, industrial and supply chain practice leader with Biggins Lacy Shapiro. Their interest is driven both by risk mitigation and a desire to make products closer to their customers.

For some products, it's possible to automate much of the production, cutting into the advantages of low-cost labor in other regions of the world. Companies reshoring within the United States created a record 109,000 jobs in 2020, according to The Reshoring Initiative.

Just as many people who lived through the Great Depression learned to economize by patching clothes and growing their own vegetables, supply chain leaders who experienced the pandemic likely will maintain higher levels of safety stock than they did previously.

"Managers who had taken for granted that their supply chains would remain solid got rattled, and rightly so," says Jonathan Foster, principal consultant at Proxima.

Supply chain leaders will need to work with their colleagues in finance to assess the financial impact of larger safety stocks. Typically, this will mean more money tied up in inventory.

Planning becomes more critical when disruptions are prevalent. "Planning further out is more important, so that you can counteract those delays," says Drew Herpich, chief commercial officer with logistics provider NTG. Instead of ordering inventory as customers place orders, many shippers will need to order supply before receiving orders, in case any shipments are delayed.

In addition, changes to cargo-ready days reduce the likelihood that cargo is fully loaded, Schulze says.

At the same time, agility is key. While shippers used to have 48 hours to confirm bookings, they now might need to make decisions in about 20 minutes. "Companies have to understand that's how fast freight is moving," Hill says.

Transloading, or moving a shipment from one mode of transport to another, can cost more upfront, but also can provide better predictability and faster transit times, Schulze says. For instance, shipping by truck rather than rail currently can shave two weeks off transit times in the United States, he says.

Keeping customers updated on supply chain challenges is "100% the most important piece," Hill says. While nobody likes to make excuses, it's reasonable to let clients know the challenges the industry is facing and how they're likely to impact their shipments.

The good news is that the current supply chain challenges should eventually resolve. Supply and demand will start to come into balance.

Technology also will help. For instance, autonomous vehicles will become more viable and brokerage technology, such as apps, will help streamline processes, Herpich says. Blockchain will also continue to redefine how we view the supply chain.

The current supply chain shocks, by highlighting "the importance of robust and sufficient infrastructure," such as ports and transport links, may have a side benefit. "This might be an area where we see strong justifications for future government spending, including as part of post-pandemic recoveries," Marro says.

While opinions differ on the chances of another global upheaval happening again any time soon, it's likely no company wants to be vulnerable, Comerford notes. Most will want to show they've made changes to boost the resilience of their supply chains.

Making these changes can benefit the entire organization. Burlap & Barrel, in addition to diversifying its supply chain, accelerated its build-out of the company's e-commerce channel. These efforts allowed the company to pivot to consumer e-commerce sales when its restaurant business nosedived.

Overall, business jumped 500% in 2020. "We were in the right place at the right time," Frisch says. "If the disruption had happened a few years ago, we would not have been ready."