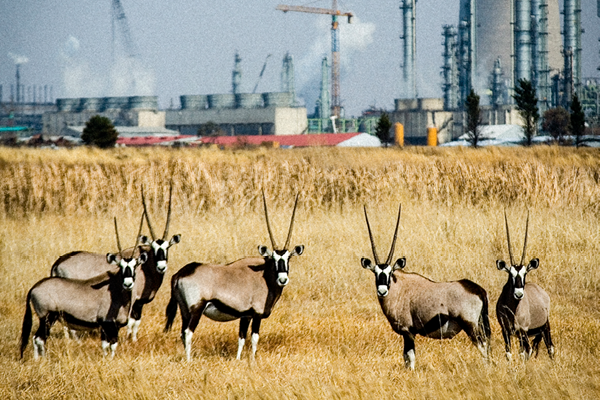 A game reserve stands next to a Sasol petrochemicals plant in Secunda, South Africa. The company pioneered the technology to produce oil, petrol, and other chemicals from coal. (Photo: Sasol, via MediaClubSouthAfrica.com)

In many ways, Africa's potential as a manufacturing and logistics hotspot mirrors the continent's greatest allure: an abundance of raw, natural riches such as gold, diamonds, precious metals, timber, oil, coffee, cotton, and cocoa that has paved the way for investment from companies and countries looking to tap these valuable commodities.

Over the past few years, the United States, France, and China have jockeyed for position as the continent's most aggressive suitor. China's motive is clear: Africa's energy and agriculture affluence is a great source for fueling and feeding a growing middle class. And now a new player has entered the game: Malaysia. The Southeast Asian country has trumped China in the size of its foreign direct investment into Africa, according to recent United Nations data.

Still, much of this outlay has been exploitative rather than constructive. The Democratic Republic of Congo's struggle with conflict minerals serves as a microcosm for similar abuses elsewhere on the continent. Socio-political instability, civil war, disease, corruption, piracy, and nepotism have all impeded economic development. Yet the continent is brimming with potential—far beyond the mines, manufacturing plants, and crop fields that incent foreign exploration.

As Asia's low-cost manufacturing edge continues to dull, companies are naturally looking for the next hot labor market. South Africa has joined Brazil, Russia, India, and China (known collectively as the BRICS nations) as an emerging economic mover and shaker. But the country is really a proxy for the continent at large.

The Lay of the Land

Geographically, Africa is a global crossroads. At the nexus of its northern Mediterranean shoreline and Eastern Red Sea coast is the Suez Canal—the busiest shipping corridor in the world. It's proximate to Europe and the Middle East, and a direct line to Asia and the Americas via its eastern and western seaboards, respectively.

But Africa is also a place of extremes. A number of the continent's best-performing economies—South Africa, Algeria, Morocco, and Egypt—are located at its poles. Following the 2012 Arab Spring uprisings, North Africa devolved into a socio-political tinderbox. On the other end, South Africa still struggles with the legacy of Apartheid. In between, poverty, corruption, and violence continue to thwart progress.

What African countries possess in natural wealth, they lack in other areas, notably transportation infrastructure. The continent lays claim to the most unique countries in the world—the total number of which seems to change with every new civil war. As a consequence, Africa suffers from a lack of centralized transportation infrastructure linking more developed coastal cities with hinterland areas.

Because of its dependence on mined or harvested commodities—as opposed to services or domestic industries—reducing freight costs and transit times are critical success factors. But aside from South Africa and the Suez Canal in Egypt, Africa lacks major global ocean or air transport hubs. A fractured network of small, regional ports has catalyzed dysfunction and constrained development.

Beyond the ports, Africa's overland infrastructure is equally limited. Sub-Saharan Africa accounts for only three percent of the rail transport of developing countries, but has 17 percent of the population and seven percent of the GDP, according to a study by the Organization for Economic Co-operation and Development, an international world trade advocacy.

Less than one-fifth of Africa's road network is paved, compared to more than one quarter in Latin America and more than two-fifths in South Asia. While the International Monetary Fund projected a 5.3-percent economic growth rate for sub-Saharan Africa in 2013, trade barriers between countries, and a lack of transport integration, continue to impede improvement.

But signs of progress are arising—and much of this optimism centers on Africa's maritime trade. DP World, the third-largest international port operator, is making significant investments. Major new developments include the Doraleh Container Terminal in Djibouti and management of two terminals in Algeria, at Algiers and Djen Djen. The company also has stakes in Mozambique and Senegal.

More recently, a consortium comprised of APM Terminals, Bollore Africa Logistics, and French industrial group Bouygues placed a bid to manage a second container terminal at the Port of Abidjan, Ivory Coast. APM Terminals is the largest port operator in West Africa, with nine existing facilities in the Ivory Coast, Liberia, Benin, Nigeria, Cameroon, the Republic of the Congo, and Angola. Plans for the new terminal include an injection of $590 million over a 21-year concession term. By accommodating larger containerships, the consortium hopes to transform Abidjan into a regional hub for West Africa.

Similar developments are underway elsewhere on the continent. China is looking to finance what could be a $10-billion port complex in Bagamoyo, Tanzania; Morocco plans to set up 70 logistics hubs in Marrakesh, Casablanca, Tangier, Rabat, and Fes by 2020; and South Africa is investing in its bulk port at Richards Bay and container operations in Durban.

The next phase in Africa's transportation transformation will likely focus on efforts to grow hinterland connectivity. Developing these types of connections is crucial, noted Reik Mueller, port and terminal facilities firm APM Terminals' director of business development and infrastructure investments for the Africa-Middle East Region, speaking at the 2012 Africa Ports, Logistics, and Supply Chain Conference in Accra, Ghana.

Nearly one in three African countries is landlocked, he noted. This area accounts for 26 percent of the continent's landmass, and 25 percent of the population—or more than 200 million people. Africa's rising star as a potential manufacturing and trade destination depends on connecting these untapped markets.

In fact, the continent has the fastest-expanding labor force in the world, with more than 500 million people of working age. That number is expected to pass one billion—matching China and India—by 2040.

APM Terminals is facilitating transshipment between ports and interior destinations by establishing inland container depots outside terminals in Luanda, Angola, Ghana, and Nigeria. The key is making these ports and their extended supply chain ecosystems more competitive, thereby increasing service and reducing costs.

Taking to the Skies

Demand for modal connectivity also extends to air freight, which shows similar signs of advancement. African carriers saw year-over-year airfreight demand rise by two percent, according to the International Air Transport Association (IATA). This growth is underpinned by expanding national economies, according to IATA. It also reflects Europe's growing market for fruit and flowers—and Chinese demand for everything.

But a more important indicator is the growth in passenger demand. Intra-African premium (first and business class) air traffic grew by 14.7 percent in 2012 ‚ while economy class traffic increased 11.5 percent—compared with global international air traffic growth of 4.8 percent and 5.9 percent, respectively.

Still, eight of Africa's top 10 airports are located in South Africa, Morocco, or Egypt—a reflection of their appeal as tourism destinations. As with most developing countries, airfreight demand and infrastructure will inevitably follow the consumption curve.

Across the Great IT Divide

Africa's information technology progression lags well behind the curve of other developing countries. With several exceptions, the majority of African nations fall outside the Top 100 in network readiness, according to the World Economic Forum's 2013 Global Information Technology Report.

Internet penetration in Central Africa is nebulous at best, which is an impediment to development. But that is likely to change at broadband speed.

In some regards, developing countries have an advantage over adequately sophisticated and hard-wired areas. Fewer barriers to entry enable new, wireless communication capabilities to populate—and the return and impact of investment is far faster. Companies such as IBM, Google, Microsoft, Apple, and French mobile operator Orange see Africa as the next great frontier to grow IT and communications connectivity, and their respective businesses.

As more global companies expand operations into Africa, they will find ways to cope with the market's challenges—and ways to overcome those obstacles as the continent's economic growth progresses.

Authorities are hoping current and future government investment in Djibouti's port complexes attracts global private investors. Located on the Horn of Africa at a critical gateway between the Gulf of Aden and the Red Sea, Djibouti's economy is heavily reliant on import, export, and re-import trade with Ethiopia—Africa's second most populous nation and one of the fastest growing economies in the world.

In 2011, DP World, the third-largest global port operator, announced plans to triple the size of Djibouti's existing port. The $396-million expansion will increase Doraleh Container Terminal's container capacity from 800,000 TEUs to 1.7 million TEUs during the first phase, and to three million TEUs in the second phase. Plans are also in the works to develop a free trade zone to further boost port traffic.

The Port of Durban, located on South Africa's eastern bend, is the largest container hub on the continent. Durban, the country's third-largest city, is a bustling center of commerce, increasingly defined by its domestic industries.

The past two decades have seen a marked uptick in the gross value-added contribution of the financial and manufacturing sectors, according to a recent economic development report by eThekwini, the metropolitan municipality within which Durban resides. Other industries such as mining, agriculture, and construction have either remained static or declined.

Consequently, the transportation, storage, and communications sector experienced the highest overall growth in the past 15 years (5.3 percent), with the financial and business sector following closely behind (5.2 percent), according to the report.

The focal point for Durban's economic growth remains the port, and capacity is expected to almost double to five million TEUs over the next decade. The South African government has pledged $33 billion toward further infrastructure development throughout Transnet, the country's rail, port, and pipeline company—$2 billion of which will be specifically earmarked for the port. This outlay does not include other capital that has been directed toward its sister company Transnet Port Terminals.

China's insatiable appetite for infrastructure investment at home and abroad led the country to help finance the construction of a new port at Bagamoyo in Tanzania. The project aims to decrease congestion at the nearby port of Dar es Salaam, where lack of space limits expansion.

In March 2013, Tanzanian President Jakaya Kikwete and Chinese President Xi Jinping signed 16 agreements for development projects on mainland Tanzania, and three agreements for Zanzibar. The deals clear the way for China to finance and build a $10-billion port at Bagamoyo, as well as other infrastructure projects.

China's play in Tanzania is incentivized by the presence of abundant mineral resources in the region, including iron ore, gas, oil, and coal. A port at Bagamoyo would facilitate China-bound shipments of minerals from Zambia, Zimbabwe, and the Democratic Republic of Congo via the Indian Ocean. Currently, shipments need to be routed through the Kenyan port of Mombasa and the South African port of Durban—both of which are circuitous and costly options. The Tanzanian government hopes the new port will become an East African trade hub for Indian Ocean shipments, and help expose other landlocked countries in the area.

China has committed to a $500-million installment in 2013 to initiate the port project, which is scheduled for completion by 2017 and is expected to expand Dar es Salaam's capacity from 800,000 TEUs to 20 million TEUs. Whether that is a realistic goal remains to be seen, but all eyes will be on Bagamoyo for the foreseeable future.