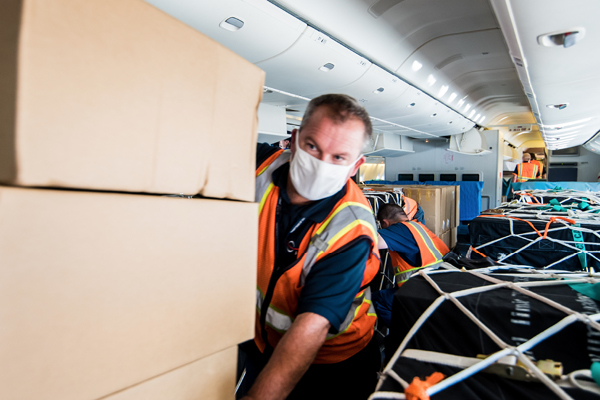 The air cargo sector has flown up, down, and sideways during the past half year. How are carriers and airports stabilizing?

During the past few months, Burlap & Barrel, a purveyor of single-origin spices, has seen a higher percentage of its shipments delayed, and more have missed flights due to the increase in overall shipment volume, says Ethan Frisch, co-founder and co-owner of the Jackson Heights, New York-based firm. One shipment was split, with a portion sent back to Tanzania before Burlap & Barrel ultimately received it.

Like Burlap & Barrel's shipments, the airfreight sector has experienced multiple ups, downs, and tangents during the past six months. "With the pandemic, all rules have been thrown away," notes Glyn Hughes, global head of cargo with the International Air Transport Association (IATA).

The first hurdle occurred in spring 2020, when most passenger air travel halted. "Passenger aircraft, which typically hauls about 50% of air cargo, was gone," Hughes says.

Belly capacity for international air cargo dropped 67% between August 2019 and 2020 due to withdrawn passenger services. Partially offsetting this was a 28.1% increase in dedicated freighter capacity, according to IATA.

Equipment wasn't the only constraint. Lockdown orders and the need for pilots and other workers to quarantine after flying to certain regions meant fewer handlers to load, unload, and move cargo.

Along with these changes, many shipments of consumer items were understandably delayed so personal protective equipment (PPE) could take priority.

"During the first few weeks of the pandemic, we saw a dramatic shift in what commodities were being tendered," says Wally Devereaux, managing director, cargo and charters with Southwest Airlines. "Instead of fresh seafood and other perishables, we saw a sharp increase in PPE and eventually COVID-19 related supplies," he says.

The explosion in e-commerce—it grew by nearly one-third between the first and second quarters, the Department of Commerce reports—has magnified these shifts. The growing number of consumers ordering everything from toothpaste to sneakers online further tightened air cargo capacity constraints. "Since everyone was at home, we saw our e-commerce business take off," Devereaux says.

Clearly, the air cargo market has faced numerous challenges since the pandemic began. But, intrepid airlines, airports, shippers, and others are stepping up to meet those challenges.

Early in the pandemic, as the constraints on cargo capacity became clearer, a number of regulatory agencies around the globe, including the Federal Aviation Administration (FAA) in the United States, steadily began allowing passenger planes to transport cargo in what typically would be the passenger areas.

After all, "no people were moving but cargo still needed to move," says Donna Mullins, president with consulting firm Mullins International Solutions.

To address concerns about safety, the FAA identified a number of requirements the planes would have to meet. For instance, the cargo loaded onto each seat can't extend above the seat back.

The shift to allow cargo in passenger areas "has been an economic lifeboat for many airlines," says Brandon Fried, executive director with the Airforwarders Association. Southwest Airlines, for example, pushed forward plans to offer cargo-only charters, with freight flying in the belly of its Boeing 737s, Devereaux says.

Several weeks after allowing cargo on passenger seats, the FAA allowed airlines to remove the seats from their passenger planes, enabling them to hold more cargo. Again, they had to meet safety criteria, such as loading cargo in such a way as to allow access to it for firefighting.

Cathay Pacific Airways pulled the seats from the economy and premium economy sections of two passenger airplanes, converting them to "preighters," says Frederick Ruggiero, vice president of cargo for the Americas.

"It's isn't easy," he says. "There's a huge difference between a 777 freighter and a 777 passenger plane with the seats removed." 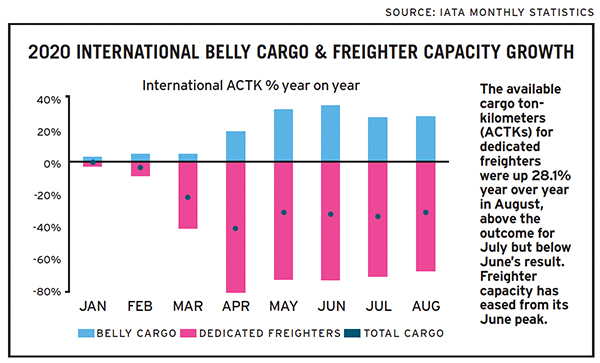 In another sign of growing demand for air cargo capacity, in September 2020, Cathay launched a new cargo service from Vietnam to Pittsburgh International Airport (PIT), adding to the airline's existing network of 19 cargo stations throughout the Americas. While this is intended to last for 12 weeks, it might become a regular route depending on interest, Ruggerio says.

Before the pandemic, about 80% of flights at cargo-focused Rickenbacker Airport in Ohio were scheduled service and 20% ad hoc charter. With COVID-19, the numbers flipped. "The schedule went out the window," says Bryan Schreiber, manager, air cargo, business development with the Columbus Regional Airport Authority.

Rickenbacker retooled its handling operations to accommodate the growing number of passenger planes now carrying cargo. Offloading these planes tends to be more labor intensive than pure freighter aircraft, which have automated systems and palletized and containerized positions. For instance, with one airline, the airport gained permission to bring portable roller-conveyors into the cabins of the converted planes.

To alleviate congestion and move cargo more quickly once it's on land, some airports enter into airport partnerships. An example is the agreement between PIT and Ted Stevens Anchorage International Airport that allows both to work together to find innovative solutions for moving air freight faster and more efficiently by, among other steps, exchanging information in airport management and exploring alliances between air cargo industries. "We're partnering to find ways to move freight easier and faster," says Bryan Dietz, vice president of air service development with Allegheny County Airport Authority.

An airport community system is another tool for speeding the movement of air cargo. A neutral and open electronic platform, this system allows for intelligent, secure information exchanges. Truckers could use such a system to book appointments with ground handlers, even before driving into the airport.

"The handler would get a list of bills the trucker will pick up and thus knows the equipment they'll need, expediting land-side moves," Mullins says. The systems also reduce human contact—a key capability during a pandemic.

During the past few months, the airfreight market has shown signs of stabilizing. By August 2020, global air cargo demand, measured in cargo ton-kilometers (CTKs), was 12.6% below previous-year levels—not great, but a slight improvement from July's 14.4% drop, according to IATA.

On the other hand, global CTK capacity was down by nearly 30%. "Improvement is slow due to capacity constraints from the loss of available belly cargo space as passenger aircraft remain parked," IATA notes.

Another potential challenge is the upcoming rule change by the International Civil Aviation Organization (ICAO) that goes into effect in June 2021 and may require all cargo to be screened at its origin. "That would, of course, slow things down," Hughes says.

The Vaccine's Impact on Air Cargo

The availability of a safe and effective COVID-19 vaccine will be tremendous. At the same time, "transporting a vaccine will result in air demand, thus reducing capacity further for shippers," says Cathy Morrow Roberson, founder and president, Logistics Trends & Insights.

On top of the increased demands are the many unknowns, such as when a vaccine will be approved, when it will become widely available, and how it will be transported. It's also not yet clear how the vaccines will travel, or what temperatures and containers will be required.

Security is another concern. Even if each vaccine is relatively low value, a shipment containing millions of vials is apt to catch the attention of criminal organizations. "They can create chaos or mayhem, or hold shipments for ransom," Hughes says.

Finally, deciding how a vaccine will be distributed among 200-plus territories around the globe poses thorny ethical dilemmas. Who gets to go first? What happens if some with resources engage in "vaccine tourism" to move closer to the front of the vaccine distribution queue?

"We're in the 'ask a lot of questions' mode," Ruggiero says. While the answers may not be clear for a while, shippers should be aware that the emergence of a vaccine, while critical to life and health, will also impact air cargo travel.

Some in the airfreight industry are testing shipments of sensitive materials to prepare for vaccine transportation. For example, Russia-based AirBridgeCargo Airlines, working with third-party logistics company Kuehne+Nagel, transported more than 100 tons of sensitive products from Germany to China through Russia.

'With most of the anti-COVID-19 shipments switching to slow logistics, we could use this period to test our capabilities for vaccine transportation," says Nikolay Glushnev, general director, AirBridgeCargo Airlines.

"Although we have not used special containers for this particular charter flight, it is still essential to guarantee that all the stakeholders are ready for a considerable batch of pharma shipments," he adds.

staying ahead of the trend

Given expected ongoing tightness in air cargo, shippers should continue to evaluate other modes of transportation. They'll also want to leverage technology that allows them to efficiently manage and book freight, as well as compare rates, lanes, and modes.

And while it's hard to precisely predict the direction of future air cargo rates, the likelihood of continued higher rates appears strong. Most airlines continue to suffer from a free fall in passenger volume, and cargo helps mitigate their losses.

To stay ahead of an ever-evolving market, Frisch says Burlap & Barrel has been "placing larger orders, getting tons of details from freight forwarders, and communicating clearly with our customers about the delays and the reasons for them."