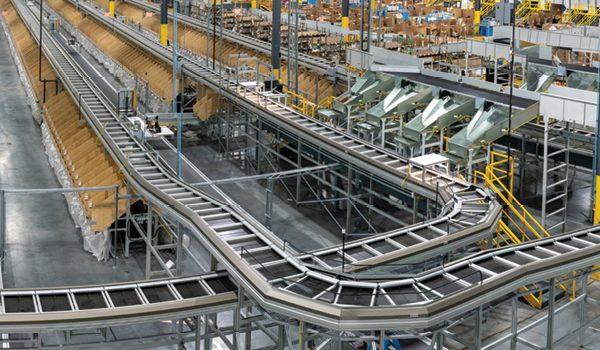 Faced with increasing e-commerce complexity, distribution centers have to balance flexibility with efficiency. Here are the products, equipment, and systems that streamline DC operations.

Among the challenges, such as port congestion and raw material shortages, buffeting many supply chain and logistics operations, labor is "the number one pain point" for many, notes Rudolf Leuschner, associate professor with Rutgers University. "You can't drive by a warehouse without seeing a help-wanted sign," he says.

"Customers are constantly talking about the labor shortage," adds Matt Cherewka, director of strategy and business development with Vecna Robotics, a provider of autonomous mobile robots geared to warehousing, distribution, and manufacturing operations. The shortage is prompting companies to identify ways to use their resources, including employees, more effectively, he adds.

For many, this is a shift. In many warehousing and distribution centers, the "traditional, go-to playbook has been to throw bodies at problems," Cherewka says. That often made sense when wages were $10 or $12 per hour. Now, however, the labor shortage has prompted a spike in wages. "That's changing the game for a lot of people," he adds.

One driver behind the labor shortage is the pandemic, which took some potential workers out of the workforce. "COVID has thrown everyone for a loop," says Scott Eisenberg, regional sales manager with EuroSort Inc., a manufacturer of high-speed unit sortation systems.

Products often come in multiple sizes, colors, or shapes, all of which must be stocked. The hazardous nature or fragility of some items means they need extra care in handling. For some products, pickers may need to capture individual serial numbers or another attribute.

The need to manually manipulate products, also often required with e-commerce orders, is one of the final frontiers when it comes to automation. "The process of picking up and placing items is one of the most challenging things to automate due to the variety of products," notes Rueben Scriven, senior analyst with Interact Analysis.

The challenges resulting from the growth in e-commerce are good problems to have. Yet they still need to be addressed.

Distribution centers that rely on manual processes, as many still do, often run into scalability challenges, Eisenberg says. As sales grow, the centers often need to throw more people at their processes.

While this may solve the immediate challenge, it remains inefficient. When processes are automated, however, it may be possible to, for instance, boost labor by 25% and increase throughput by 50%.

Some distribution center solutions that have been around for decades continue to advance. Conveyors, carousels, and pick-to-light systems are well-established, but still evolving, Tunstall says. To optimize their use, many companies use warehouse management systems (WMS) or warehouse control systems (WCS), which can integrate with other business systems. For instance, an organization might integrate a WMS and an enterprise resource planning (ERP) system.

Along with WMS solutions, Scriven says, many companies opt for some form of mechanization, such as "convey-and-sort" solutions. Goods-to-person technology that brings products to the picker eliminates much of the time workers used to spend traveling to pick items.

Automation tends to work better for some products rather than others, Leuschner notes. For instance, the electronic components used in auto manufacturing tend to be roughly the same size and weight. Automating their movement tends to be more effective than when the product assortment is more varied.

The conundrum many distribution centers have confronted when considering automation is the need to balance flexibility with efficiency. "Historically, there has been a trade-off between flexibility and throughput when it comes to fixed infrastructure automation, or automation that's bolted to the ground," Scriven says. Recently, the trend has been toward automation that offers flexibility.

At the same time, the deployment of robots can boost complexity, Tunstall adds. That's prompting the development of software that manages multiple fleets of robots. This software can be especially important for companies implementing more than one type of robot.

One question being asked more frequently is whether the supply chain shortages of the past year have dimmed interest in just-in-time as an inventory approach. Rogers says he doesn't foresee a permanent shift away from just-in-time, but adjustments, like companies holding more safety stock, are likely.

As more distribution centers and warehouses are built closer to consumers, the inventory levels needed typically increase. It's the "square root law," Rogers says. That is, achieving the same level of customer service in a greater number of facilities generally requires more inventory.

While the pandemic drove much of the initial urgency in many companies' efforts to automate, the drive toward automation is likely to continue. "This was a wake-up call," Cherewka says. "Companies know they can't get caught like this again."

Over the past 20 years, EuroSort has installed 450 of its high-speed, high-capacity unit sortation systems around the globe, from China to Kazakhstan to South Africa, and including about 200 in North America. Along with its home base in Amsterdam, EuroSort has a North American branch in Baltimore, Maryland. "We've been busy," Eisenberg says.

Because the company focuses on sortation systems, its employees have amassed a breadth of knowledge and experience. "We're specialists," Eisenberg says. "We focus on what we're good at, and partner with other experts in material handling integrations."

As one of the few remaining independent manufacturers of sortation systems, EuroSort has worked with many of the most highly regarded integrators in the industry, he adds.

As important, the investment and space needed to install a EuroSort sorter tends to be significantly less—up to 50% or 60% less—than required by many competing sortation systems. To achieve this, EuroSort has focused on developing "straightforward mechanical systems that allow our sorters to stay simple," Eisenberg says.

So, while a competing machine may be able to fit 10 sortation destinations within a 10-foot-square area, EuroSort might fit 20.

While EuroSort works with companies across multiple industries, most handle at least 15,000 items per day, with some processing more than one million products daily. "A company definitely needs a floor in order for the return on investment, or ROI, to make sense," Eisenberg says. "But the ceiling is pretty high."

EuroSort offers five types of sorters, and is known for its expertise in pharmaceutical products, postal orders, and apparel. The types of products to be sorted determine which system makes the most sense for a particular operation. For instance, its cross-tray sorter is geared to handling small, lightweight items for apparel, shoes, andpharmaceutical products.

The single push tray sorter can sort up to 13,300 items per hour, including polybags, apparel, heavy cartons, and other items—all at the same time. EuroSort's Sweeper sorter works best with items that are less than 5 inches in size and weigh less than 5 pounds, such as books, small packages, and jewelry.

To cut shipping costs, many companies use EuroSort's solutions to take on some of the sorting tasks that they previously outsourced to the postal service.

For example, a company might have used the post office to sort orders from its West Coast facility, distinguishing between those that were headed to a West Coast address and those that would travel to the east. "It can be that simple," Eisenberg says. "It's one less sort the post office has to do, and that can mean savings on each package." As important, especially given delays elsewhere in many supply chains, a company that takes on this function can slash up to one day from shipping time.

Not only was the company able to recoup its investment within six months, but it cut shipping times by about a day. "Either one by itself would have made for a successful project," Eisenberg says. "The fact that we were able to do both made the customer very happy."

Moreover, because it offers its solutions through a robots-as-a-service model, organizations don't need to commit to a large upfront investment or plan years in advance to implement them.

A key feature within the AMRs—path planning—along with multi-sensor fusion and state-of-the-art safety systems, enable VecnaRobotics' AMRs to safely navigate around obstacles, such as pallets. The robots also can leverage cloud-driven updates to immediately boost in-field performance.

For example, VecnaRoboticsmanages a large cross-dock operation for a multinational distributor of medical products. Once inbound containers are palletized, the robots transport them to storage,outboundstaging lanes, or for e-commerce orders, to a case sorter.

VecnaRoboticsworked with the medical distributor to implement this system before the pandemic. As a result, even when orders jumped in the early days of the pandemic, the existing fleet was able to handle the increased volume.

One reason? "Our systems havethe ability to dynamicallyadjusttheir routes," Cherewka says. "Unlike some systems, they don't operate on fixedAGVroutes."

Instead, since the Vecna Robotics solution communicates with the warehouse management system, it knows where everything needs to move, and can orchestrate and adapt the optimal plan in real time. "It can effectively manage how everything moves through the building," Cherewka says.

As they move about, the Vecna Robotics robots continually collect data. "We can pump the information back into the system to improve how goods are flowing through the building," Cherewka says.

Moreover, the system can leverage both information from individual robots, as well as the entire production operation, to identify the most efficient ways to traverse a facility. Using Vecna Robotics' analytics tools, the system can provide operational insights, such as heatmaps of traffic and activities.

VecnaRobotics' orchestrationsystem also can identify and flag bottlenecks,and then will re-plan tasks and reroute Vecna's fleets. It also will alert managers,whothen can decide whether to add resources to these areas.

As more companies implement robots, often from multiple vendors, ensuring they work in concert with each other becomes more important. To that end, Vecna Robotics has been working across the robotics industry to create interoperability standards, whichallow for visibility into combined solutions, so managers can see each robot and its activities.

Whileeach vendor still manages direct control of its own robots, the standards would allow forgreatercoordination between the two, boosting both efficiency and safety.

"We're big believers that no one size fits all," Cherewka says. As a result, many companies will likely implement a mix of robots. In addition, he adds, the standards should"lead to greater democratization of automation."