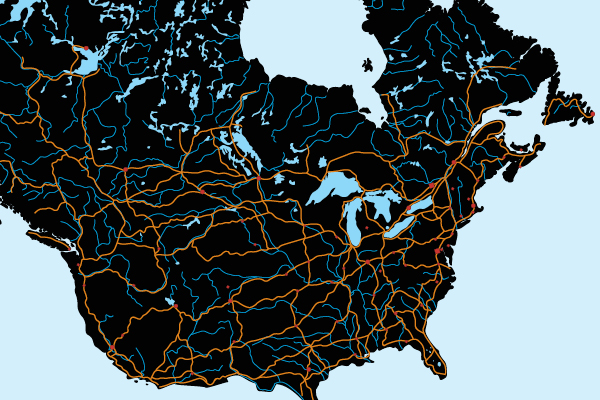 The tight relationship between the United States and its northern neighbor makes cross-border trade seamless and efficient. Logistics professionals leverage these connections to keep goods flowing and supply chains humming.

No sooner had Joe Biden been sworn in as president of the United States on January 20, 2021, when Press Secretary Jen Psaki announced—to no one's surprise—the new president's first meeting with a foreign leader would be with Prime Minister Justin Trudeau of Canada.

"The president's early calls will be with partners and allies," Psaki said. And the United States has no stronger partner and ally than its northern next-door neighbor.

The Government of Canada states it officially: "The Canada-United States partnership is forged by shared geography, similar values, common interests, deep personal connections, and powerful, multi-layered economic ties. Canada and the United States enjoy the largest trading relationship in the world. A secure and efficient flow of goods and people across the border is vital to both countries' economic competitiveness and prosperity."

Biden and Trudeau committed to a "Roadmap for a Renewed U.S.-Canada Partnership" to revitalize and expand the historic relationship between the countries. The agreement establishes a blueprint for mutual prosperity, including a partnership on climate change and strengthened cooperation on defense and security.

For logistics professionals on both sides of the border, this agreement translates into a continuation of the most steadfast trade relationship in the world.

Consider these most recent figures reported by the Office of the United States Trade Representative:

Signed in 1987, CUFSTA placed Canada and the United States at the forefront of trade liberalization. CUSMA, which went into force in July 2020, preserves key elements of the long-lasting trading relationship among the countries and incorporates new and updated provisions that seek to address 21st-century trade issues and promote opportunities for the nearly half billion people who call North America home.

In practical terms, this extraordinary collaboration means border crossings are accomplished with relative ease—that is, when shippers have the assistance and advice of logistics professionals who keep up to date on the rules, laws, policies, and protocols as they evolve to keep pace with commercial concerns.

Just as with the partnership between the two countries themselves, relationships and history between shippers and their professional logistics partners are essential to success.

As the saying goes, the more things change, the more they remain the same. From the perspective of Polaris Transportation Group, highly regarded for its scheduled LTL service between the United States and Canada, the saying translates into seamless border crossings amid political transitions and even a worldwide pandemic.

"Both governments have always been a pleasure to deal with," says Dave Cox, president of Polaris. "With respect to supply chain security, it has always been a great working relationship."

Based in Toronto's neighboring city of Mississauga, Ontario, Polaris specializes in the shipment of dry goods and is an industry leader in transit to and from the United States, including Alaska.

The company maintains U.S. headquarters for Polaris Motor Freight, Inc., in the Cleveland, Ohio, suburb of Willoughby. Given the company's hybrid geography, Cox describes Polaris as "an American company headquartered in Canada."

Border transfers are "business as usual," he says, while Polaris navigates the process between the two countries in a collaborative and cooperative manner. Border security is always paramount, Cox says, adding that business continues to be robust even as supply chains have been reimagined due to the pandemic. Prospects for the future are likewise positive, he says.

"Capacity is tight across the board," Cox acknowledges, but good communication has been a key to diminishing the impact. "We spend a large part of every day talking to our customers and business partners," he says, in order to ensure that the company continually understands both their current and future needs.

Despite the commonalities that exist between the U.S. and Canadian markets, Cox says, there are important distinctions that shippers on both sides of the border must bear in mind, particularly as market conditions evolve after COVID.

"Canadian shippers may not understand the capacity crunch as much as they should," he says, adding that Canadian distributors "need to be enlightened" about the stresses that currently exist on the U.S. side.

Cox advises companies to maintain consistency in their relationships with existing supply chain providers so that they can work together in the effort to secure capacity. It is natural for rates to ebb and flow along with market conditions, he points out, but it is essential that good value is maintained at all times on both sides of the equation. "The key is fairness," he says.

The border-crossing process is greatly assisted when the proper documents are provided as early as possible. "We move 300,000 orders across the border—both ways—every year," Cox says. "We need to get the documents early and have all our ducks in a row."

In the end, it is all about communication and relationships.

"Good relations with your custom broker are essential," he says. "And custom brokers need to do a good job educating their clients" about new laws and protocols.

"We work with a lot of custom brokers," Cox says. "We get as much information and detail into our automated system as early as possible." Taking such careful steps has paid dividends through the COVID crisis.

"The world has changed since March 2020," Cox says. "When we went into March we didn't know what to expect. Looking back, it is staggering to see where business is despite the crisis."

In logistics as in life, every journey begins with the first step. But when the journey is about getting products to market, the final mile may be the journey's most important segment of all. For moving products across the Canada-U.S. border, getting to the consumer's doorstep means partnering with final-mile providers.

"By getting closer to the end consumer, manufacturers and distributors get the final-mile delivery completed with speed, reliability, visibility, and competitive price," says Dean Mills, vice president of sales, North America, for TForce Logistics, an asset-light final-mile logistics and transportation provider with extensive coverage across the United States and Canada.

"Due to the demand for faster deliveries, TForce Logistics hosts branch locations and delivery zones in population-dense areas across Canada and the United States," Mills says. Five established regional networks cover the U.S. Northeast, Central Canada, Texas, Southern California, and Western Canada, with a sixth network in development in the U.S. Southeast.

"This networked solution expansion allows shippers to inject their shipments into one TForce Logistics location, for an overnight interline to the other final-mile branches," Mills explains.

"For instance, in the Northeast, the New Jersey branch serves as an injection location, connecting into New York, Philadelphia, Baltimore, and Washington, D.C. for next-day delivery," he adds. "This provides significant value and flexibility for companies managing inbound freight requiring next-day final-mile shipping."

Final-mile considerations were among the areas of logistics significantly impacted by the waves of change that swept the world in the recent past.

"The dynamics of the past few years prioritized the importance of carrier diversification," Mills says. "One option is to hire additional transportation managers to oversee multiple final-mile carriers, depending on the carrier's individual network reach. This results in a vendor-heavy portfolio, multiple systems, and administrative resources.

"The other option is to partner with carriers like TForce Logistics, with a broad reach that meets your network portfolio's needs," he adds.

Companies are setting up micro fulfillment centers close to their customers, Mills explains, manually building solutions that get product inventories closer to the end consumer.

"There is significant upside to partnering with 3PLs who work with importers, manufacturers, and shippers to get their products closer to the end consumer," he says. "Companies with a fast and reliable next-day final-mile delivery service are winning the hearts and reviews of their customers."

TForce Logistics has more than 70 locations strategically placed in all major U.S. and Canadian cities. In June 2021, the company launched its Texas expansion, using four warehouses to cover 191 ZIP codes in Dallas, 127 ZIP codes in Houston, 74 ZIP codes in San Antonio, and 56 ZIP codes in Austin. This means e-commerce shippers can use Dallas as an injection site with next-day service in the four largest cities in Texas.

In 2020, the company announced an expansion of its dedicated last-mile delivery capacity in Toronto with the opening of the Torlake center, its third facility in the greater metropolitan area.

As in everything related to logistics, the goal is to get closer to customers. The unique spirit of cooperation and collaboration that exists between Canada and the United States, coupled with strong relationships among logistics providers, combine to make cross-border trade a particularly bright spot on the landscape of international trade.