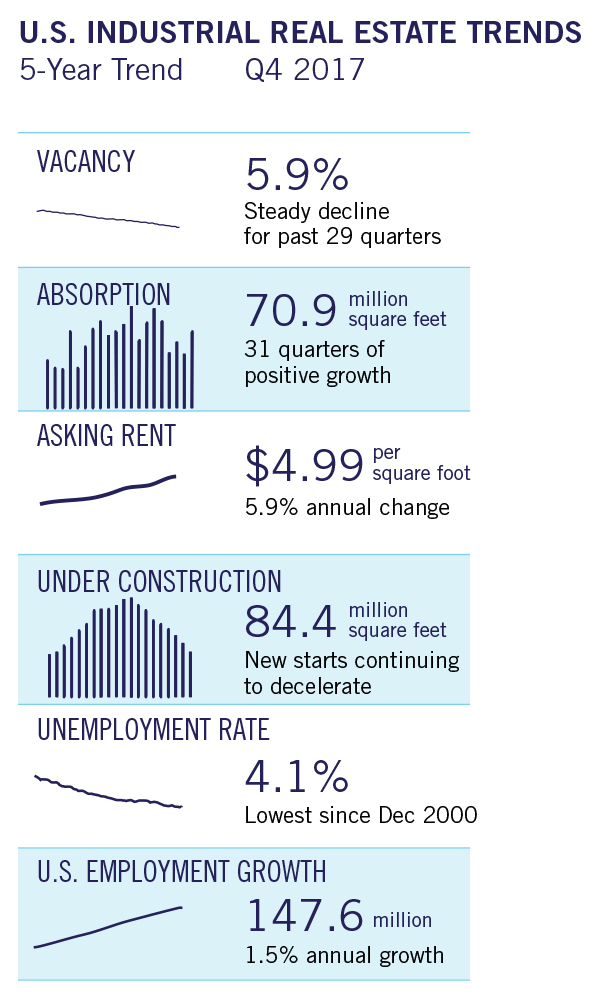 Ports set records for container volumes as e-commerce grew to 9.1 percent of retail sales by the end of 2017, up from 8.2 percent the prior year. Three of the largest transactions completed in the fourth quarter were in the nation's leading port markets: In the Inland Empire, Walmart and Solaris Paper took one million square feet and 862,000 square feet, respectively, and Best Buy signed for 725,000 square feet in New Jersey.

"What is remarkable about the current 5.9-percent vacancy rate is that it has been cut in half since the fourth quarter of 2010, despite 873 million square feet of new development during the same period," says Matthew Dolly, research director for Transwestern. "Nationally, we've experienced four consecutive years of at least 200 million square feet of positive absorption."

New starts continue to decelerate, however, with only 84.4 million square feet under construction, the lowest level since Q2 2013, the report reveals. This could lead to a plateau in vacancy for the coming quarters.

"In the current environment, especially in markets that are facing a scarcity of developable land, companies are turning their attention to redevelopment and renovation," Dolly says.